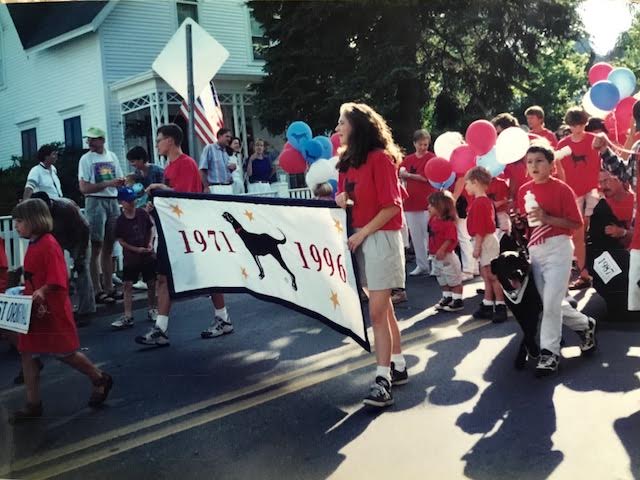 We are lucky to spend our summers in the historic town of Edgartown on the island of Martha’s Vineyard, seven miles off the coast of Cape Cod in Massachusetts. We own an old home right in the old village, a few steps away from Main Street, abuzz with activity all day on the nation’s birthday. I put little flags in the planter boxes in front of my house.

Though the parade won’t kick off until 5pm, by noon, the near-by church has set tables on its lawn full of delicious lobster rolls, on sale to benefit its charitable and social justice mission. The neighboring town’s band plays a set from the viewing stand. Eager parade-goers have staked out their spot on the curb with beach towels. The small downtown area is full of people milling around, eating Mad Martha’s ice cream, people sitting all day at the roof-top dining spots, ready for the evening fireworks, still many hours away. Many wear red, white and blue, feeling patriotic. I have a flag pin set in rhinestones that was my mother’s from her days in the USO during WWII. I wear it proudly. I might wander over to my neighbors to say hello and share a drink. It is a friendly day and I glow with the warmth and happiness generated by the feelings around me.

Finally everyone is in their viewing spots and the parade kicks off promptly at 5pm. It begins with a Marshal, usually some dignitary from Edgartown, riding in a car, followed by veterans, wearing their uniforms, if they can still get into them. We all scream and applaud them these days, thanking them for their service. All manner of people and floats follow.  Anyone can be in the parade. Friends drive antique fire trucks and throw candy to the crowds. I scream their names and wave, hoping to be recognized. Antique cars follow. Marching bands and fife and drums play to my delight. 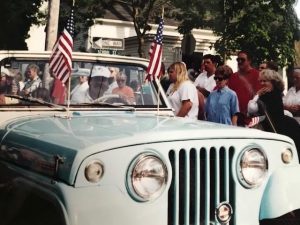 Various organizations and animals from boating to camps, agriculture clubs and drama and dance groups, dogs and llamas follow along. Camp Jabberwocky, a long-established camp for disabled people, always has a theme. With counselors for every camper, since many are in wheel chairs, the costumes always reflect the theme, are incredibly inventive and bring smiles to all (and a lump to my throat). The parade wanders through downtown, taking about an hour. I’ve learned to stand with friends at the very beginning, while there is still a supply of candy and beads being thrown. I can double back to my street and watch it a second time if I choose (I usually don’t).

The last year the Celtics won the NBA title, the owner was on the Vineyard, along with Ray Allen. They both rode in an open car, with the championship trophy hoisted aloft. This may seem ho-hum to those in the Bay Area, but, though the Patriots have had a great deal of success, the Celtics haven’t seen glory days since the mid-80’s, so we all went wild.

The parade always ends with fire trucks from all the towns, sirens screaming loudly as the crowds disperse, going home to barbecue.

At night there is a fireworks display over Edgartown Harbor, an easy walk from my home. When my kids were young, we took beach chairs, sat out and watched them on the beach in front of the light house. The crowds after, coming through town, as we tried to get back to our house, were horrible. Lately, we’ve been invited to dinner parties that have a tiny view of the spectacle. I guess I’ve become a bit jaded. There is a more spectacular fireworks display later in the summer over in Oak Bluffs, and we all turn out for that, an end-of-the-summer ritual. 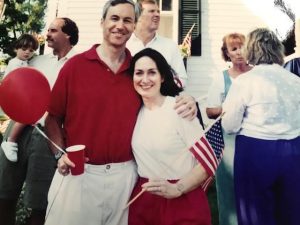