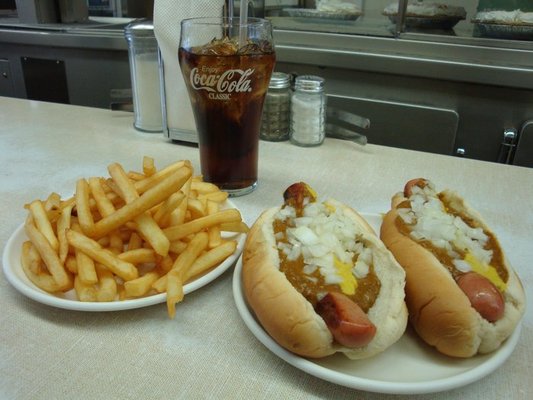 June 1968. We emerge boisterous from the prom, the night still balmy. Six of us pile into my GTO and speed toward downtown Detroit to Lafayette Coney Island. Brightly lit, open till three, the Lafayette serves unkosher hot dogs on a Wonder Bread bun, slathered in mustard, smothered in thin chili, topped with a pile of raw onions, greasy fries on the side. Heaven. These Coney dogs have little to do with Coney Island, New York, but they are a Detroit institution and we grew up with them. We cram sweaty into a booth, raising scarcely an eyebrow in rented tuxedos and spaghetti-strap gowns. The Lafayette has seen it all. No need for menus: One Up Without for me, foregoing the onions, hoping for later; One Chili Only for you. We are young, fearless, on the town.

We cram sweaty into a booth, raising scarcely an eyebrow in rented tuxedos and spaghetti-strap gowns.

By the eighties, Coney Islands have gone upscale, dotting the wealthy Detroit suburbs like rhinestones among sapphires. We live in California now, married all these years, but we make a point when visiting to go for Coneys. Though our tastes run now to crusted salmon and risotto, and the fries go straight to our waists, the Coneys always taste like 1968, and youth, and prom night, and eager kisses in the back seat.

October 2001. In town for my sister’s funeral. We make our customary pilgrimage, but the Coneys seem flat and empty, the flavors crass, the mustard cheap, the chili a health hazard. I can’t believe we’re still eating this crap. We’ve turned a corner, crested a hill. Next stop, geezerhood. We’ve lost sight of 1968, buried in the dark recesses of our memories and taste buds. We look ahead to senility and the early-bird special at Bouchon.

4 Responses to A Coney Island of the Soul