Prompted By What We Ate
13 comments. 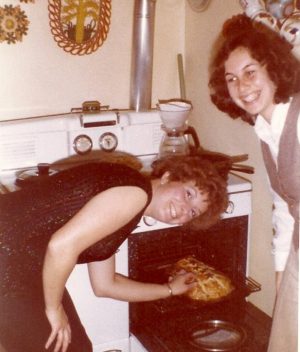 We were two young couples in our early twenties: husbands in grad school, wives working in the same office and becoming fast friends. The four of us bonded over cocktails and college football games. In addition to our habit of sharing Happy Hours together on Friday nights, we discovered that we all loved to cook.

We were looking at a ridiculously expensive cut of meat that we were instructed to stud with truffles, brush with brandy, brown in butter, slather with a mixture of more butter blended with pâté, and finally wrap like a precious gem in a buttery dough.

They cooked for us in their tiny one-bedroom apartment, and we cooked for them in ours, producing increasingly fancy meals for each other in our cozy kitchens. As I say, we were young—and a little reckless with our alcohol consumption. One of us (her husband) liked to play footsie under the table with the woman who was not his wife (me). His body occasionally brushed against mine when no one was looking. I didn’t actively discourage him, and in fact I felt a little frisson of excitement when it happened—a  harmless, tipsy cat-and-mouse game we played when our spouses were changing the record on the turntable or opening a  bottle of wine in another room.

We decided to make a special dinner together: the girls would shop and cook, the guys would do set up and clean up, and my husband would also make his specialty—chocolate mousse—for dessert. We wanted to try something grand, something we’d never cooked before, something we’d always remember.

I remember it, all right. We spent two whole days preparing the meal of our lives.

What better resource with which to plan our special meal than a fancy French cookbook with the kind of dishes people were eating in those days, with pounds of butter and cups of cream in almost everything?

What did we care? Our arteries were clear. We felt no sense of danger. Some of us still smoked. We would live forever.

After we scanned the table of contents in our copy of Dione Lucas’s cookbook, we landed on Filet de Boeuf Wellington as our main course. Working backwards, we decided to start with a chicken liver pâté, served with a sliced baguette, followed by Potage de Tomate et Crabe, a cream soup made from scratch with fresh tomatoes and a generous addition of crab meat. 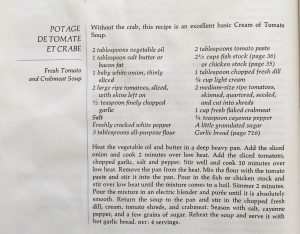 Shopping for this dinner mostly involved tossing packages of butter and cartons of cream into our cart. But for the fillet of beef we went to Lenny’s Meats, the fancy butcher shop in Berkeley, also known as “Leonardo da Mici.” When the butcher put the fillet on the scale and the numbers jumped up, my friend and I nearly choked. We were married to grad students after all, and working at jobs that didn’t pay that well. We were used to buying hot dogs, ground beef, and chicken—not expensive cuts of meat that should have been gift-wrapped in Tiffany blue instead of rolled in white paper. The 4 pound fillet set us back half a month’s rent.

Other ingredients for the Wellington included truffles (the recipe said “optional,” but we were already in so deep. . .), Cognac or “good brandy,” and six ounces of “fine liver pâté.” The recipe included puff pastry dough (with which to encase the meat)—meaning another half pound of butter.

We were looking at a ridiculously expensive cut of meat that we were instructed to stud with truffles, brush with brandy, brown in butter, slather with a mixture of more butter blended with pâté, and finally wrap like a precious gem in a buttery dough.

We prepared the dough a day ahead—kneading in the butter with our fingers, setting more butter in a rolled out square of dough, folding it, wrapping it, and chilling it for 30 minutes each time. Rolling and folding and chilling —over and over, until we’d done the six turns Lucas insists are required for a proper puff pastry. I spent most of the day bent over my friend’s kitchen table with a rolling pin, trying to dodge her husband’s casual body bumps and brush-bys. It was a long afternoon.

Making the soup seemed easy in comparison. Skinning the tomatoes per the instructions, I impaled them on the tines of a carving fork and touched them to the flame until the skin began to pop. Then I peeled the skin off, like at the end of a summer sunburn. After following another paragraph of precise cooking instructions (including making fish or chicken stock to add), we puréed it all, and added cream and crab.

The moment finally arrived  for the masterpiece dinner to begin:  The candles were lit, the wedding china and linens laid out, the wine poured. The four of us gathered around the table and began to eat.

But by the time our glorious Wellington was ready to be served—after the rich pâté, after the creamy soup, and after more than a few glasses of wine—no one had much of an appetite. My friend and I carried our gleaming golden brown triumph from the oven  to the table, set it down, and looked at each other. 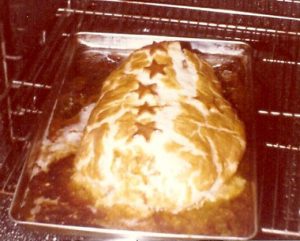 Proud of our accomplishment, but unable to act very excited about eating it, we hesitated before cutting into the flaky, six-times turned pastry that surrounded the tender fillet. Everyone waved the white napkin of surrender. I felt a sympathetic tap on my foot under the table.

We served a token sliver of our buttery-laden entree and packed up the rest for leftovers. The Wellington would have its day another time.

Later that evening, my husband and I curled up on our tiny love seat, sipped a nightcap and slowly savored his velvety chocolate mousse.