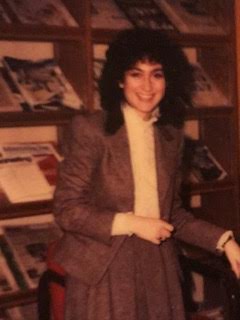 I cringe when I hear jokes putting down used car sales people. My father began with a used car lot, built it into a Chrysler Dealership. When that ended, sold Buicks for a time, then became the first Director of the Endowment Fund for The Detroit Jewish Welfare Federation, starting in 1970. He was known for his honesty and integrity and stressed those values to me.

I learned them well and they became paramount to me in my sales practice and life. My customers could count on me to be direct and straightforward with them. While I represented a product, I also represented myself, as I do in all my daily transactions. Time and again, after a successful sale was completed, I heard, “I bought because of you, Betsy”.

That is flattering. I hope the client also bought because the need was there for whatever I sold and I had convinced the client that my product best suited that need. Nevertheless, my clients always understood that I stood by my company and my products. The Featured photo is at an office party my company threw for me on my 30th birthday. That was my professional look at the time.

When I stopped believing in my product, I could no longer represent it. I could not go before someone and try to con him. It goes against everything I believe in. I just cannot bring myself to compromise my integrity. I would rather look for a new job. My good name is all I have.

This continued into my volunteer work, whether chairing reunions, as I just completed my 45th at Brandeis. Those who attended thanked me for my efforts to bring everyone back, make it a touchstone and remind them of what connects us to one another and the university; or other volunteer work throughout the years…at my children’s schools, on various alumni boards, on the Rose Art Museum Board, Art Councils, at the large annual sale for the School of the Museum of Fine Art. I always give it my all.

So living in this current climate, where we have “alternative facts” and our president thinks nothing of making huge, verifiably false statements over and over again, goes against everything I was taught was honorable, correct and decent, not to mention the proper way to govern oneself and the country. It horrifies me daily. The rest of the free world (and I have a child who lives in London, so I hear a lot about what the British think), just shake their heads and wonder what has happened over here. How could we have lost our moral compass?

I wonder that myself. How could we have lost our way to this con man who does not know right from wrong, who thinks nothing of lying to save his skin? During this last college reunion, I attended a small dinner with close friends. Another person joined us, a sports journalist, who for years covered boxing and was often around the current occupant of the White House. He reminded us that the Orange One learned a lot from boxing promotor Don King, known more for savvy than truth. Another presidential mentor was Roy Cohen, fixer to Joe McCarthy, master of the Red Scare, the greatest witch hunt since the original Salem Witch Trials of 1692. Not great role models.

A friend of a friend once played golf with our fearless leader, before he was president. They were playing in a golf tournament and the Orange One didn’t like where his ball landed, so he kicked it. The friend was astonished, “You can’t do that! This is a tournament.” “There are three things you need to know about me,” rejoined the Orange One. “I cheat at business, I cheat on my wife, and I cheat at golf”. So much for honor. That man is now the leader of the Free World with millions of devoted followers, who like him because he “tells it like it is”. Truly frightening. Our allies no longer trust that promises made by the United States will be kept because he doesn’t keep his word. He is notorious for that. He is not an honorable man and does not understand what honesty means. As Roger Cohen said in his D-Day NYT op-ed column, the US became a world leader after WWII because “America’s word was a solemn pledge”, but not with this hollow, vain man.

A good name is all we have.

14 Responses to A Good Name is All I Have