Prompted By An Unforgettable Person
19 comments. 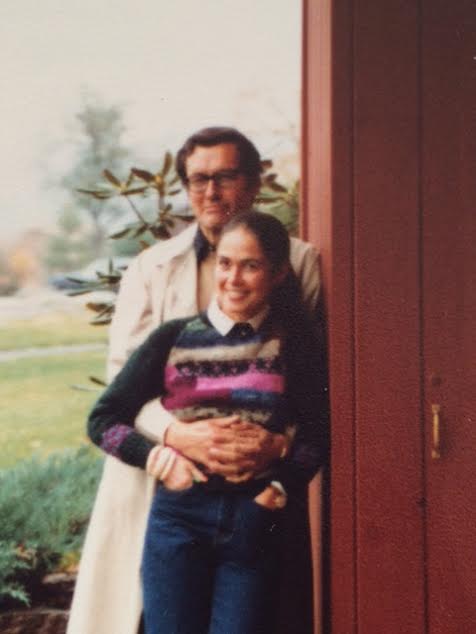 (I keep updating this story as I learn new information about my long-lost, but still fascinating cousin.)

The last time I saw him was in October of 1980. He’d called my office a day earlier. “You’ve got to come up over the weekend. It’s fantastic here.” Trying to get a room in Woodstock, VT over Columbus Day weekend on one day’s notice was no small feat, but seeing my cousin Alan was an opportunity not to be missed. He was pure magic, vibrant, tall, lithe, full of energy and enthusiasm and I thrilled to the sound of his voice.

I am the youngest in a large gaggle of cousins. My dad, Alan’s uncle, was the youngest of eight children, the “runt of the litter”, he described himself and I am the baby’s baby. A sunny man with a sweet disposition, Dad LOVED his family and passed that along to me. He played “bachelor uncle” until the age of 32 and lived with his oldest sister Pauline when he came home from the war.

Alan was Pauline’s boy, her second born. He was a whole generation removed from me. He had already left postage stamp-sized Huntington Woods, Michigan for Dartmouth College, a stint working on a ship on Lake Superior and who knows what other adventures before I was even born. He settled in Geneva, Switzerland and had many professions; photographer, international businessman, jet-setter, European distributor for Roots shoes. Legend goes that he’d danced with Brigitte Bardot. He was exotic, restless. He was called Action Jackson – long before the movie.

He would blow into Detroit and Pauline would host a gathering of the tribe. Yet somehow, Alan was one of those people who made each person feel special. He took an interest in me, his baby cousin. When I was very young, he developed Bell’s palsy, caused by a luge accident. Evidently luging was big with the jet-set in the 1950s. I remember sitting across a restaurant table from him, one side of his handsome face drooped. He spoke of it without self-pity and moved on. It completely cleared up. When I started to study French, he spoke French to me. He came to my house and took the time to photograph me, even though everyone wanted a piece of him when he was in town and he knew EVERYONE. He gave me a sense of worth at a critical point in my life. 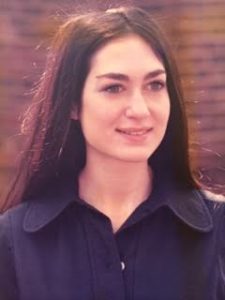 He dated debutantes and celebrities. He was friendly with Nina Simone. The “high priestess of jazz” held my baby cousin Gregory like the Madonna while in Geneva…but I get ahead of myself. He wouldn’t find Miss Right until 1973. He finally brought THE girl home to meet us all. The beauty’s name was Elisabeth Harmer – dark hair, vivid blue eyes, fair skin, Austrian. Like the famously beautiful Hapsburg empress, she too, calls herself Sissy. She is regal, savvy, just five years my elder, and she adored him. They were the most glamorous couple I’d ever seen.

They had New England connections. She had been an exchange student at Milton Academy. He bought land near Dartmouth and had a business lawyer on Beacon Street, a few blocks from our condominium. So when he called that October morning, I answered.

Through a friend, we found the last room in Woodstock, and Alan and Sissy squeezed us into their busy schedule for lunch on Saturday. It rained over night, our ignition wires had problems when wet, so Alan had to fix that too. He drove us to their rented condo.

Sissy introduced us to their au pair. I didn’t know what an “au pair” was, but figured if Sissy had one, it must be important. And I met Gregory, their adorable two year old. It would be the only time I’d see the dear boy until he turned up in Boston at a cousin’s bar mitzvah in 1999. We are now so close that he came in from London for my son’s bar mitzvah in 2002. I was honored to do a reading at his wedding in England, Labor Day weekend, 2016. And in March, 2018, I cradled his 11 week old daughter during dinner so he and his beautiful wife Laura could enjoy a bit of food and I could cuddle my newest cousin, moved beyond words that this was Alan’s granddaughter. 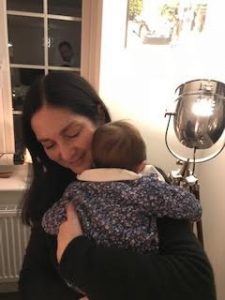 But that long-ago October day I had my first 35 mm camera and Alan took me out into the breath-taking foliage to give me pointers. and again photograph me. I took a shot of them too. Sissy fed us a hearty soup and good bread and then we were gone. 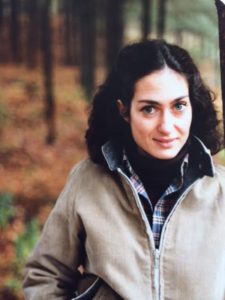 Three months later, I sat on the arm of my blue couch in my Beacon St. condo, listening to my father’s words, but not comprehending. “Alan is dead,” “How?” “They think he had the flu. He was sick for a few days and in the hospital, but they couldn’t save him.”

He died the day before Sissi’s birthday. He was 50 years old. And he died of lung cancer, long festering, but with no symptoms. His ashes were flown home. He’s buried with his parents, and mine and so many of my other relatives, all of whom out-lived him.

As I looked to the back of the chapel that December morning in 1999, my tears welled up. It was as though Alan had come back to me. Gregory has finer features than his father, and is even more handsome. Yet he has his father’s bearing; he is tall and lithe like his father, and when he smiles, his eyes crinkle like his father. He has a great desire to know his father’s family and I am more than happy to oblige. And through Gregory, I’ve regained Sissi, whom I had tried to stay in touch with, until she remarried and moved to Venezuela. Now she is rose fragrance and cappuccino wrapped around a spine of steel. She lives in London and that hearty soup she served has grown to a fabulously successful catering business. She and her family visited us on Martha’s Vineyard several times throughout the years. And on June 30, 2004, I was in London, helping her serve a luncheon for the Prince of Wales. 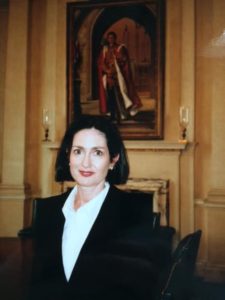