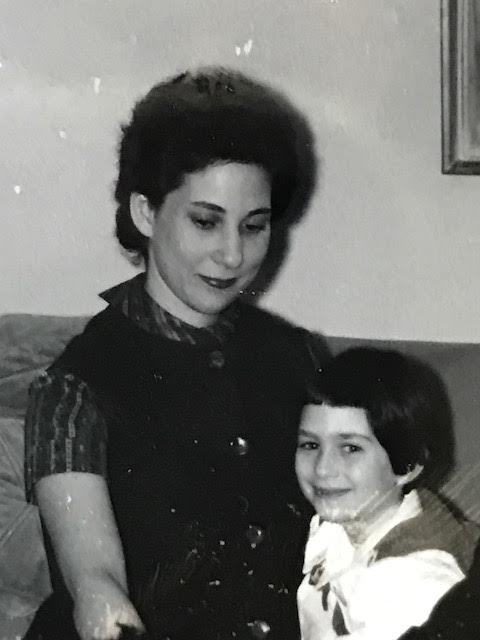 With Connie, as a little girl

“Don’t trust anyone over 30!” I remember the phrase well, but somehow, though I did some eye-rolling back in the day at things my parents said, I never embraced the philosophy. My parents were the babies of their respective families and were 39 when I was born. I am the youngest in a large generation of first cousins. The oldest had children my age or older, so I grew up accustomed to being with “peers” much older than myself, and a diverse lot of relatives. Though it took a long time for my cousins to treat me as an adult, they always treated me with kindness. I never felt a generation gap, as I was always with older relatives. I felt no need to rebel in my personal life.

What I did have was an unstable mother and a father (like others of his generation) who worked long hours. My mother was very artistic, loved music, dance and fine art and took me to see and appreciate all of it. But she suffered tremendous anxiety, depression and self-loathing. Somehow, I was supposed to make up for her supposed short-comings…something that no child could ever live up to. She loved me, not for myself, but for how I reflected on her. My father was a loving, kind man, but couldn’t deal with my mother and worked six days and two nights a week. He nurtured as best he could, but he just wasn’t around much. It was only later in life that I learned what a remarkable human being he was.

I became adept at seeking surrogate mothers to nurture me. I found them amongst my cousins, in a teacher and from my friends’ mothers. I was lucky to turn out a whole human being thanks to the love and continued support of these wonderful women. They know how much I love them to this day and I still turn to them for support and guidance. I am lucky they are in my life. No generation gap here. Only love.

The first such relationship was my cousin Connie, shown, pregnant with her first son and 7-year-old me. I was the 6-year-old flower girl at her wedding and I just adored her. I have three Polaroid photos from that day. I kept them by my bed at all times. The featured photo is the least crumpled. She was kind to me and always had time to talk, even with three little boys of her own around. When we moved from Detroit (where we lived a few blocks away from her father, my dad’s oldest brother) to Huntington Woods, her husband built our house. It was a few miles from hers. If things got too intense in my house, I’d bicycle over to hers, just to be close. I was always friendly with her three sons, though they are younger. They all came out to Boston for both my kids’ b’nai mitzvot. When my parents took a two week vacation to Palm Springs (a trip my father won through his car dealership), when I was an 8th grader, I stayed with Connie and her family. Though we did not live in the same community, they got me to school every day, took me to all my activities and Sunday School, and even left me in charge of the three little boys one night (quite an adventure for this 12 year old non-babysitter). I stay with Connie whenever I go for a Detroit visit now. She held the shiva when my father died. She remains a close confidante. She has known troubles in her personal life, which she has shared with me, but she is strong and brave. She worked as a physical therapist and after retiring, as a yoga instructor. 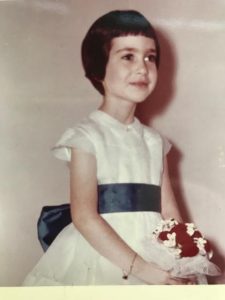 My father was always close with his first cousin Richard. When I was very young, he divorced and remarried Harriet (a dead-ringer for Jackie Kennedy with her dark bouffant hair style). My parents and Dick and Harriet often socialized, even vacationed together. They lived close to us in Huntington Woods, in an expanding, beautifully decorated home. Harriet is a marvelous hostess and cook, decorator, bridge player, but above all, a docent at the Detroit Institute of Art for over 50 years. Always patient, pleasant and friendly, she put up with Dick’s large dogs in her elegant house and always had time for and interest in me. This was my short bike ride, if I didn’t have time to get to Connie’s. I loved to see all the beautiful objects in Harriet’s home, listen to her discuss them, go with her to the DIA to learn about the art. She struggled to have children and they eventually adopted a baby boy; she treated me like her daughter. When I was home from Brandeis over Christmas break my junior year, she took me to Bonwit Teller and bought me two outfits. One lovely pink dress I wore to my two best friends’ weddings and my rehearsal dinner. The other, a pantsuit, was my go-to, chic, around-campus outfit. I wore it in my senior photo. Harriet had style, which I greatly admired. She threw one of my bridal showers. I still have the fully-outfitted sewing basket that was the present. She called a few months ago to tell me, at the age of 91, she is alive and well, and has moved next-door to her son, where he could care for her. I was so glad to hear from her.

Elaine Zeve was my second grade teacher. I began wearing glasses during that time and she made me feel OK, since she wore them too. I started down my ugly-duckling path during that period, but she asked if I had been named “Elizabeth” after “Elizabeth Taylor”, then considered the most beautiful woman in the world. I was ga-ga over this teacher. She encouraged my love of performing. She came to see me in my school plays. We had her to dinner, and she had me over to her house, where I met her daughter Rhonda, just a few years my senior. Our birthdays were two days apart and for 10 years we exchanged birthday cards, until my senior year in high school I didn’t hear from her, which I thought was strange. Two months later my mother heard that Mrs. Zeve had died of stomach cancer, aged 42. Mother took me to her funeral, the first non-family member’s I had ever attended. I cried my heart out for my lost mentor.

Friends’ mothers have also been surrogate mothers for me. One has been particularly meaningful. Millie is bright and vivacious, for all the world resembling Doris Day. Her daughter and I have been friends since we were 12, though we only lived in the same city for a year in Boston in the mid ’70s, then the 16 months I spent in Chicago, for Millie is a Chicago native. I saw her often in Boston, and constantly in Chicago. She always treated me like her own daughter and imparted wisdom that my mother never could. We puzzled through difficult situations together. She offered generous guidance, kindness, an open heart and perspective. She has lived an interesting life and shares her joys readily with me. She encourages and protects. She is political and wise. She has great taste, loves classical music, is a wonderful cook; she is what a mother should be. She wrote the best letter when my father died. I treasure it more than 27 years later. She taught me how to grieve, and I use it as a model when I need to write a condolence note. I love her with all my heart.

Thanks to these women, I have been able to synthesize a stable personality for myself. I didn’t distrust “The Man”, I was too busy trying to become a woman.

10 Responses to An Ode to Surrogate Mothers