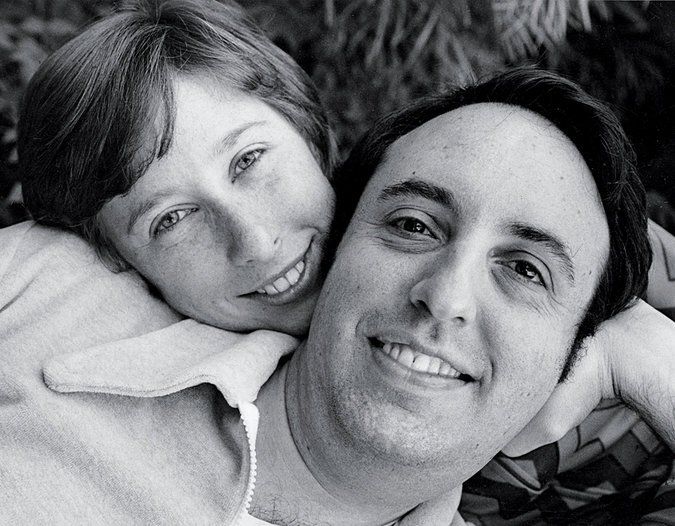 Sandra & Daryl Bem, from an article in the premiere issue of Ms in 1972.

Sandra and Daryl Bem were on the Psychology faculty when I came to Stanford as a grad student in 1972. Daryl was several years older and was already tenured, while Sandy was an assistant professor on a tenure track. They were both popular teachers and I sought out the chance to be a teaching assistant to both—Daryl in his introductory psychology class, Sandy in her class on sex roles. They were both friends and mentors. Daryl served on my dissertation committee.

We all thought equality was a great idea, but it was not easy to translate into the day-to-day work of being married.

Sandy was pursuing a research program in the brand new field of sex roles. Her guiding thesis was that traditional gender roles, where men were aggressive or assertive (“masculine”) and women were nurturant (“feminine”), were maladaptive for both sexes. Different situations called for different behaviors, she reasoned, and both men and women needed the ability to be assertive in some situations (like leading a team at work) and nurturant in others (like child-rearing). She called this flexibility androgyny. She developed a psychometric test (the Bem Sex Role Inventory) to measure a person’s orientation toward traditionally masculine, feminine, or androgynous roles. It was important work in an important new field.

Sandy and Daryl were personal mentors—to me and many other students—as well as professional ones. They tried to maintain an egalitarian marriage and were pioneers in figuring out what that meant. We all thought equality was a great idea, but in those days (or these days) it was not easy to translate into the day-to-day work of being married. They worked it out as they went. They proposed, for example, that chores and responsibilities should be assigned like roommates, not spouses, and that whoever does a task is responsible for determining how (and how well) it gets done.

We looked to Sandy and Daryl as role models and they, in turn, talked about their relationship in public. They gave a joint lecture about egalitarian marriage in Sandy’s sex role class and opened it up for questions. Personal questions did not deter them. “Who’s on top?” asked one curious student. “It depends,” they answered honestly. This lecture became so popular that they took it on the road to campuses across the country. Patti and I worked to apply those principles to our own nascent, egalitarian marriage.

The Bems’ daughter Emily was born in 1974. I remember because I wrote them a limerick:

Emily Jennifer Bem
Will she be masc or fem?
She’d best not be either
For both are beneath her.
She’ll be an androgynous gem.

So of course they began to explore, and model for the rest of us, what egalitarian parenting meant.

Around the time I got my degree, Sandy came up for tenure. The faculty tenure committee recommended her unanimously, and the department chair approved and sent it on to the dean.

He turned it down, citing lack of contribution to her field. Wait, what?

Students protested and petitioned. Sandy’s tenure became a cause célèbre on campus. But the dean held firm, and the provost and president rejected Sandy’s appeal.

It was a short-sighted, misogynistic decision that, predictably, cost Stanford not one popular, prolific professor but two. Cornell swooped in and offered both Sandy and Daryl tenured professorships, and asked Sandy to be director of women’s studies as well. In 1978, they left Palo Alto for Ithaca. Stanford’s loss was Cornell’s gain. And once again, the Bems showed us what an egalitarian marriage looks like.

I lost touch with them after that, yet they continued to serve as role models. In the mid-‘90s I heard that Sandy and Daryl had split up. I reached out to Sandy at Cornell to tell her how sorry I was. “Don’t be,” she replied. “We had a great run. Now we’re moving on to the next phase. Besides, we’re still friends.” What an original, enlightened attitude. How wise she was.

In 2009, Sandy noticed some cognitive irregularities. The next year, she was diagnosed with Alzheimer’s disease. This whip-smart professor, who had changed the way the world thought about gender roles, was slipping into dementia. She resolved to end her life while she still had the capacity to do so. That time came in 2014, a month before her 70th birthday, when she celebrated her life with Daryl and her family, then took a lethal dose of pentobarbital. You can read the poignant story of her decline and death in the New York Times. Bring Kleenex.

Sandra Bem is most remembered for her original theory of androgyny and the research that elucidated the hazards of traditional gender roles. But I remember her for having the determination and courage to live out her principles and convictions. In marriage and parenthood, in life and in death, this brave woman showed the rest of us that we didn’t have to accept the roles that life assigned us. Thank you, Sandy.

Teach Your Children
by Suzy