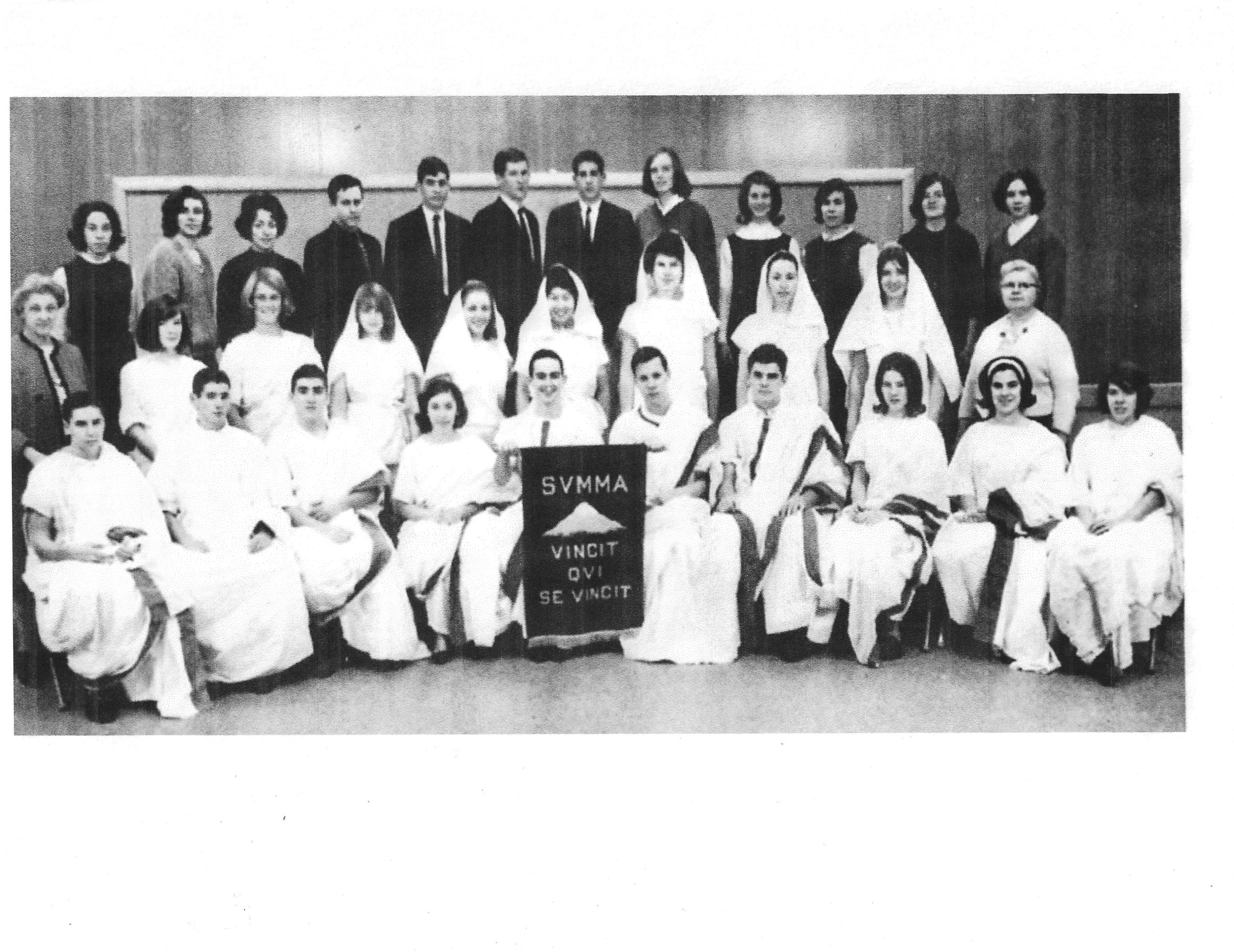 Miss Marion B. Stanhope is my high school Latin III, IV and V teacher. I am the last of my siblings to have her. They have been A students, and she will expect the same of me.

Miss Stanhope was my Miss Chips.

Every day Miss Stanhope is dressed in proper “old school” attire anchored by sturdy orthopedic shoes. She is in her sixties, but sixties look older in the Sixties. Her gray hair is swept up in a loose Edwardian bun. To me she is pretty, but one side of her face is frozen in a droop. I imagine the courage it must take for her to stand before us, so exposed. She wins my heart at once.

The one thing you need to know about Miss Stanhope is that she is formidable but fair, provided you follow

You are prepared. You have done your translation the night before. You may be called upon at random to translate Virgil/Cicero/Horace on demand. There are no excuses. As you begin to recite your passage–and certainly during exams–Miss Stanhope may decide to walk up and down the aisles. She is on the lookout for cheat sheets slipped into notebooks, pencilled prompts in texts, vocabulary words inked on palms. May the gods help you if you are caught breaking The Rules. It is, in retrospect, a fine preparation for matriculation at Harvard Business School, or service in the Special Forces. Or life.

And yet there it is, that twinkle, that half-curve of smile. She doesn’t want to punish us. She wants us to love ancient Rome and its writers as she does. Although I think it cannot be so, she talks about them so rapturously I sometimes wonder if for her the Roman gods actually do exist. She is in every way my Miss Chips.

Miss Stanhope needn’t do more than instruct us, but she does. She supervises our school’s membership in the national Junior Classical League and encourages our participation. The JCL holds annual conferences featuring chariot races and other toga nonsense. It also administers a yearly Latin examination in which her students excel (**college admissions alert**).

Here she is in my brother’s yearbook photo, standing at the left of members of the Latin Club. The Club’s motto is Vincit qui se vincit (“He conquers who conquers himself”), courtesy of 1st century B.C. writer Publilius Syrus. In my yearbook I am identified as the Curile Aedile, an ancient Roman office charged with repairing public buildings, streets, sewers and aqueducts; supervising public decency; distributing grain; and organizing public games. I have no memory of doing any of these things.

Now as a woman I ponder Miss Stanhope’s life outside the classroom.

In the Sixties just about all of our teachers live in town. Not a few have grown up here. And so I look now at the 1940 census and find Miss Stanhope residing in a charming white house just steps from the high school. She is 39 years old, listed as a School Teacher, and described as Head of Household for her mother and a boarder.

I recall a letter I write to her my senior year asking for a college recommendation. In it I reveal my plan to major in Classics and note, in passing, my father’s tough health. I have the letter she writes me back. She is living in retirement in another state now. In her letter she exhorts me not to lose my religion at this college and intimates a different life path for herself had her father not died prematurely. It is unexpected advice and an unexpectedly personal revelation. At age 17 I don’t know quite how to respond. I marvel at the letter’s intimacy then, I appreciate its meaning fully now. It is our last communication.

Oh how I wish dear Miss Stanhope has had a special person to love and to love her. But I realize it may be that, given her profession, her responsibilities and the customs of her time, she has not. No matter. All these years later I rejoice in the certainty that teachers like Miss Stanhope live forever in the hearts of their students.