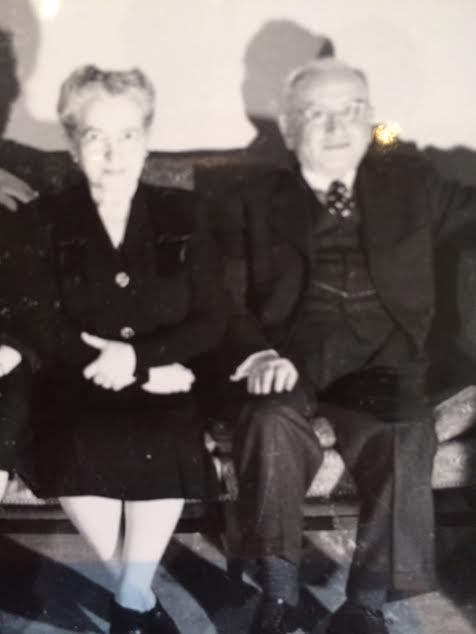 My mother’s parents came from Bialystock, still part of Russia when they met in 1902. I have a fancy dress from Grandma’s trousseau that she brought over on the ship. My mother was always proud that her family came over second-class, not steerage. My grandparents married in 1902 and were successful. She had a maid in the “old country”. He was a watch-maker and went on buying trips to Poland. He was well-educated and eurdite. They had two babies almost immediately, but life darkened for them in Czarist Russia. Though they didn’t live in a small village, they were caught up in the 1906 pogroms, sweeping through the land. They survived due to the kindness of their Christian neighbors, who hid them from the hideous, marauding soldiers, killing the Jews. They came to this country in they following year and made their way to Toledo, Ohio where they shortened the name from Beckenstein to Stein and opened a jewelry store at 612 Adams St in downtown Toledo. Two more children followed. My mother was the youngest, born in 1913.

My grandmother was the oldest of 9. We knew them all. I think my grandfather had 4 other siblings. His two sisters stayed behind. After World War I, that region became part of Poland and, except for one daughter, who married a Zionist and fled over-land in 1937, making her way to Palestine in 1939, all the rest of that branch of the family perished in the Holocaust. I know of one brother who went to South America, and Uncle Willie, who was at my brother’s bar mitzvah. During my brother’s years in Israel, while studying to become a rabbi, he located the lost niece and her family (my mother’s first cousin). She was warm and welcoming. I met her. She drew in her breath when she opened the door to me in 1972, exclaiming that I looked like her dead sister Eshkie. She bore a resemblance to my mother.

My parents were both the youngest of their family, married at 32, had me at 39, so I am the “babies’ baby” and my grandparents were old by the time I came along. We lived in Detroit, an hour away by car. My grandfather didn’t know his birth date, only that it was in December, so he chose to celebrate it on Christmas, so we could all get together as a family. Even though we are Jewish, there are many photos of family in front of a Christmas tree, kissing my grandparents, all dressed in our finery. They didn’t drive, but were driven to a Kosher resort north of Detroit for Passover. I remember as a young child joining them there. I had learned to chant the “Four Questions”. My grandfather cried as I chanted them. He played bingo there and won a stuffed animal for me which I loved and also still have, though Spotty’s squeaker nose no longer works.

My grandparents doted on me. Five years younger than my brother, my parents had given up trying when I came along. Actually, all my relatives doted on me. We didn’t get to see my grandparents often, but it was always a grand occasion when we did. Grandpa fussed over me and would be a little silly. Grandma, was an introvert and wasn’t amused by his clowning around. The home movies show her swatting at him to keep in him in line. As I grew older, he’d play gin rummy with me and deliberately lose so he could give me all the lose change in his pocket. I used to love going to his jewelry store and press my nose against the glass show case. He gave me rings with tiny diamond chips in them for my 3rd and 5th birthdays. I still have them, in their velvet and silk boxes bearing the name “Stein and Son Jewelers”. Treasures!

My grandparents native tongue was Yiddish, they spoke English with thick accents and when they didn’t want the “kinder” to understand what was being said they went back to their native tongue. My parents spoke enough of it to do the same. But hugs and kisses were the language spoken in my presence. My grandfather died when I was 11. It was my first summer away at Interlochen. I got a letter from my mother telling me about his funeral. I was stunned and turned to my cabin mates for support. Every time I go into a voting booth I cry, thinking of my grandfather who came to this country to find religious tolerance. This year I may cry for another reason.

Grandma lived a few more years. She pretended to lose her pearl earrings so that Uncle Joe (who now had sole possession of the store) gave her a new pair. She gave the “lost” pair to me. I wore them on my wedding day. She rarely spoke and sat quietly, slipping into dementia. She was put into a nursing home. My last memory of her is chilling and vivid. She was tied in a chair. She called my mother by one of her older sisters’ names. She didn’t know me, but called me “little girl”. I was 15. She sang me a lullaby, not in Yiddish, but in Russian. I vowed then and there that I would never let that happen to my mother. I kept that silent promise, taking care of my mother, with whom I had a fraught relationship, to the end of her long life.