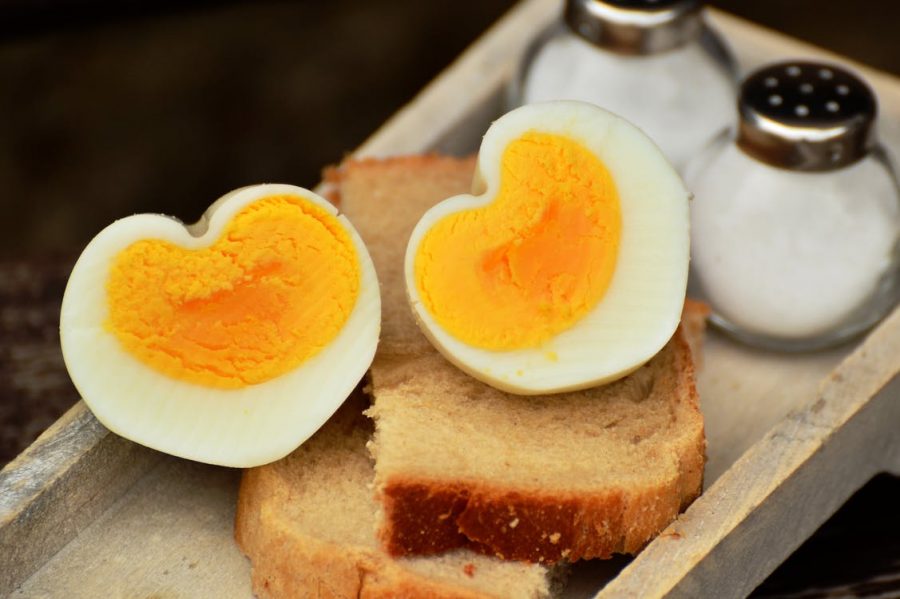 The skin on my grandmother’s hands was paper thin. It’s what I remember most about her. She also had piercing brown eyes and a way of clamping her lips together that signaled her disapproval. She wasn’t a warm and affectionate sort of grandmother. Not at all. She was more of a “my way or the highway” sort of grandmother who served soft-boiled eggs to her two young granddaughters. When my sister and I protested that we didn’t like runny eggs, she sternly informed us that “this is the way I make them.” Pursed lips, hands on hips, those intense brown eyes. Oh, I can still remember sitting at her table and staring at those liquid yolks, trying not to gag and wanting to cry.

My grandmother talked about her hands every time we saw her, which wasn’t that often, since she lived in Detroit and we lived in California. My mother wasn’t that excited to have her mother and brother visit us, and I didn’t blame her. My grandmother did not hide her feelings about the things she didn’t like: my mother’s hair color (dyed red), the fact that we lived so far away, her grown son’s attempts at independence (even though he never married and lived with her until the day she died). I heard her say one time that if she had it to do over again, she wouldn’t have had children—and she said this in front of her son, her daughter, and her two grandchildren.

About her hands, though. If I remember correctly, she blamed my mother somehow for what happened to them. Something about a treatment for an ailment my mother had as an infant, involving a substance that burned and damaged her skin. No one ever challenged her story, just like no one challenged her version of how she arrived in America when she was pregnant with my mother, even though the timeline she laid out would’ve meant an eleven month pregnancy. It was easier to gloss over certain questionable explanations than to run the risk of the harsh stare from those eyes, and the look of disapproval she wore all the time—like the apron she wore every day over her housedress.

When my grandmother heard I was planning to get married to the young man I had been dating for four and a half years, she expressed her feelings about the fact I was marrying outside my religion. With a resigned sigh, she shrugged and said: “Well, we’re all God’s children.” Not a ringing endorsement for my choice of a husband, but it was a close to a positive reaction as we were going to get from her.

A few years after I got married, my grandmother and my uncle came to visit the family in California. This time, they stopped by to see me and my husband in the little one-bedroom apartment we were renting. At one point she wandered off into our tiny kitchen and came back to announce that “They leave the butter out!” I guess she had quietly peeked in our cupboards and wanted to inform the family about our unorthodox butter-storing habits. My husband was appalled, but I wasn’t surprised. Respect for boundaries was not my grandmother’s strong suit.

Several years later, she came west again. By then we had two young children and had moved into a house. I’m not sure whether she made another cupboard inspection, but when I asked her how she liked the place, she shrugged and offered this candid observation: “It’s not the Taj Mahal.” This was true, of course, but perhaps it didn’t need to be pointed out to us in so many words.

During this visit, my grandmother also gave me some unsolicited advice about weaning my baby, suggesting there was something I could do to make him “stop doing that.” Why would I want to do that, I asked. Again, she shrugged. The answer was obvious—to her, anyway. Children are kind of a nuisance, and one should not be at their beck and call, even when they’re babies.

I wish I knew the real story of what happened to my grandmother’s hands. As a young child, I was fascinated by how transparent her skin was, all the blue veins clearly visible just below the surface. The injury caused her pain her entire life, and she didn’t suffer in silence about it.

My grandmother was a master of the guilt trip. I remember how she brought my mother to tears over the phone many times. As I got older, I didn’t blame my mother for avoiding those phone calls, and assigning my father the role of correspondent. My sister and I were also pressed into service, writing letters so our grandmother wouldn’t be “sick with worry” when she hadn’t heard from us. 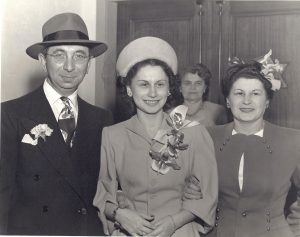 My mother on her wedding day. A rare smile from my grandmother

As grandmothers go, I think I got short-changed. My husband loved his Nana. She was a warm, affectionate woman who delighted in spoiling her first grandchild. I never met her, but I’ve heard stories about what a lovely person she was. My grandmother, on the other hand, wasn’t cut out for the role. Although she always told us she loved us and sang “I Love You, A Bushel and a Peck” every time we saw her, it seemed rote and somehow manipulative. Her hugs carried with them a sense of obligation.

Over the years, I tried to figure out why my grandmother was so bitter. I did find out a few facts that may have had something to do with her attitude.  She had grown up in a relatively well-to-do family in Poland, but they lost everything “to the Cossacks.” She married an educated man who became a house painter in America when his credentials as a bookkeeper weren’t recognized here. I don’t know whether she had any dreams or aspirations for herself. She never talked about them. She had two children and the paper-thin skin on the backs of her hands to show for her troubles. My grandfather seemed like a patient, caring man. I don’t remember too much about him, since he died when I was eight years old. But I can only imagine his struggle to temper his wife’s disappointments while providing for his family in reduced circumstances in his adopted country. There isn’t anyone left to ask anymore, so I’ll never really know the true story. My mother was surprisingly loyal, and never complained about being raised by a distant, unaffectionate mother. I know that she struggled with motherhood  and was unable to break the chain of behavior she’d grown up with.

I’m a grandmother myself now. I’ve given a lot of thought to the way I act around my young grandchildren. Do I spoil them? Maybe just a little bit. But I like to have fun with them, I love to make them laugh, and we’ve created some happy memories already. If I’m still around when they grow up and get married, I will not go through their cupboards and comment on their housekeeping. I’m trying to be a good sport. So far, so good.

And here’s another thing: I know they like their eggs scrambled, and that’s how I fix them.