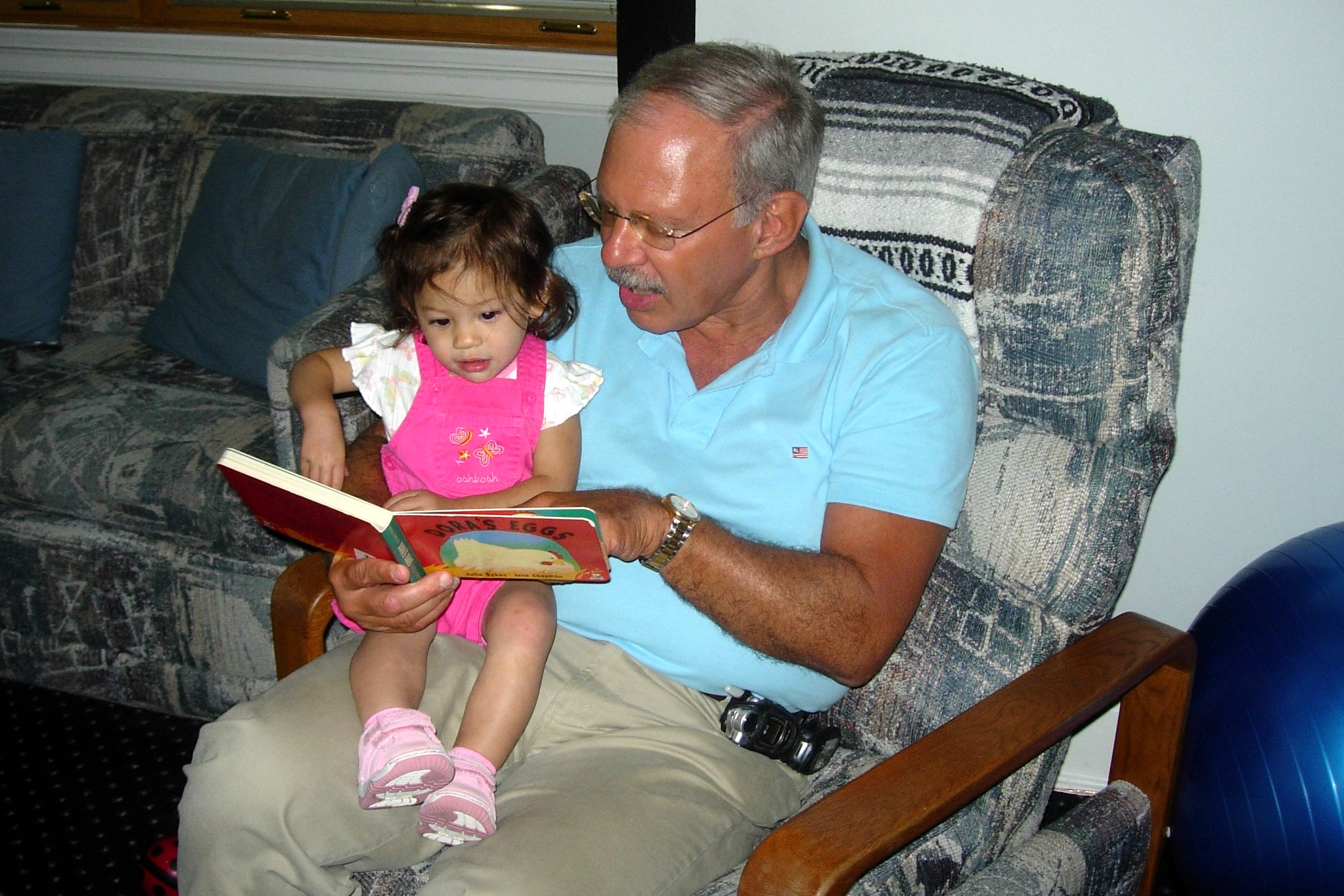 One of my grandchildren’s first sentences (OK, maybe not a sentence but a very importance statement) was “Booka-booka-booka.” She was 15 months old and all she wanted was to sit on an adult’s lap and have a book read to her. As I recall, she would repeat this demand until my voice gave out or she needed to have her diaper changed. She came by her love of books honestly, as her mother and I also loved children’s books at a young age. 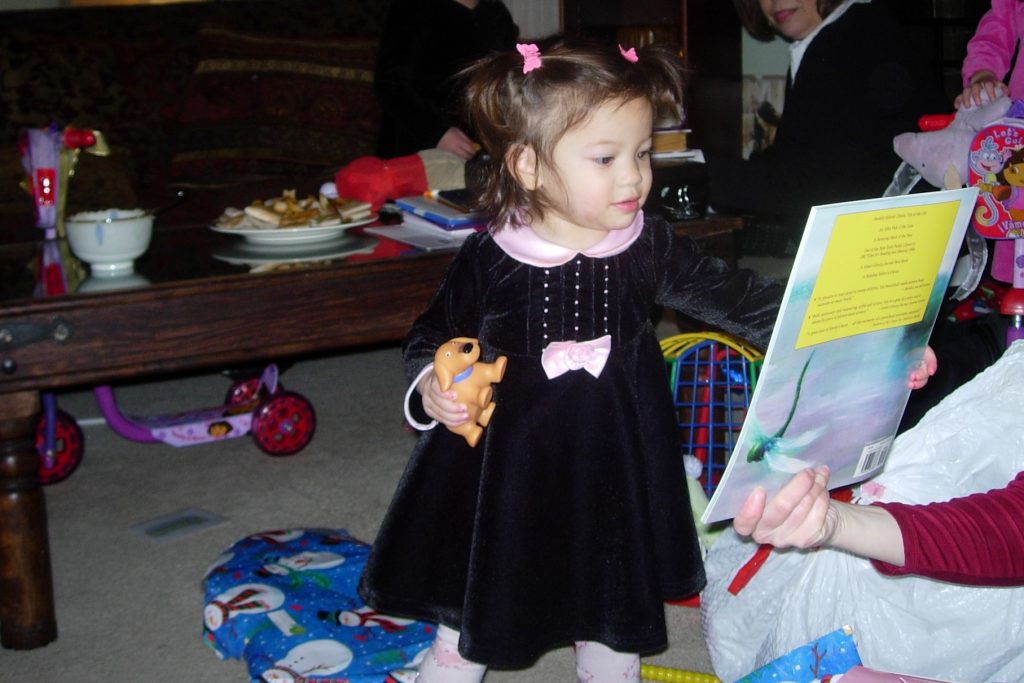 One of my fondest memories of raising my children was cuddling up at bedtime with a book and reading together.

One of my favorite memories of my father was listening to him read to me. The choices were limited when I was very young, but I do remember some of those Golden Books (Three Little Kittens, The Pokey Little Puppy, The Little Red Hen) and The Little Engine That Could, as well as the collection of nursery rhymes, which my mother often sang to me.

When I had my first child, the thing I loved most was to read to him. We started with nursery rhymes when he was a baby. He loved Richard Scarry’s Best Word Book Ever and Dr. Seuss. By the time he was two, he read Hop on Pop to me. Convinced he had memorized it, I took a novel children’s book out of the library and he proceeded to read it to me. While still in diapers, he had cracked the code to reading and our home library of children’s books grew.

His younger sisters also loved to be read to, and each developed a favorite book that had to be read so many times it often fell apart. My older daughter was obsessed with the Disney version of Cinderella when she was little, perhaps needing countless readings of the part where the mean step sisters ripped Cinderella’s dress to master her horror of that concept. She also identified with Freddy in one of her favorite books, The One in the Middle is a Green Kangaroo. By the time she was three, she was “the peanut butter part of a sandwich,” squeezed between an older brother and little sister.

Little sister loved an obscure British book, The Elephant and the Bad Baby. Perhaps she empathized with the bad baby, who always said yes when the elephant offered to steal something from the merchants they passed and eventually got into trouble for never saying “please.” But all was solved when the bad baby’s mother (that would be me) made pancakes for all of the angry merchants and the elephant. I guess they just needed to be thanked. 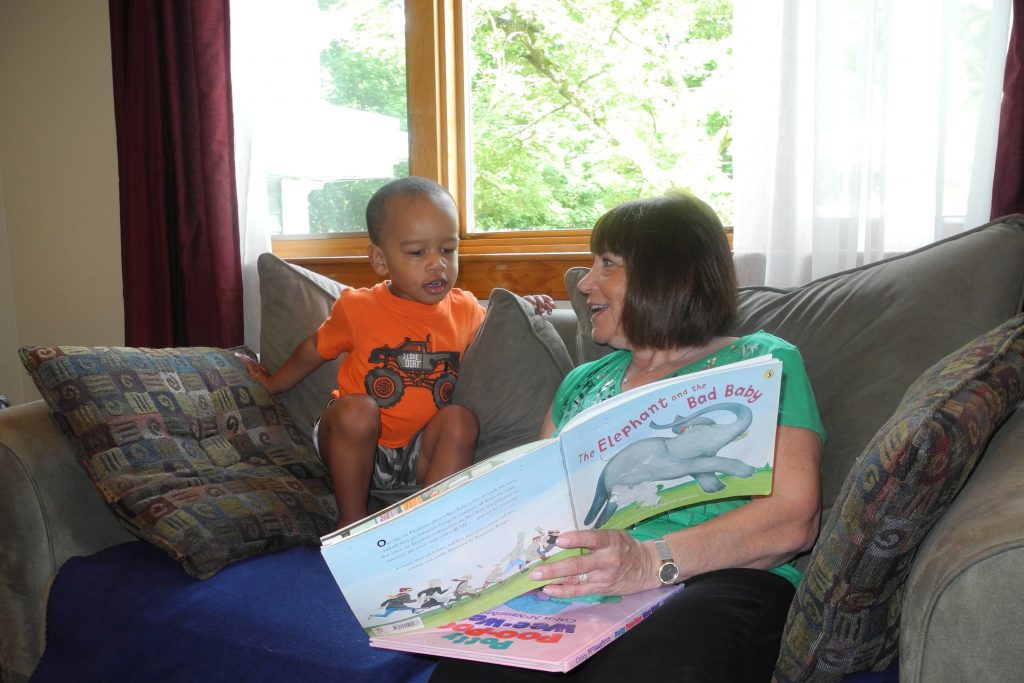 The Elephant and the Bad Baby delights another generation

One of my fondest memories of raising my children was cuddling up at bedtime with a book and reading together.  With three kids, it could take over an hour to give everyone that special time, but it was the best hour of my day.  As the children grew, we progressed from Goodnight Moon to series like One of a Kind Family, Little House on the Prairie, and the Narnia stories to novels. We read together through elementary school, well past the time they could read for themselves. 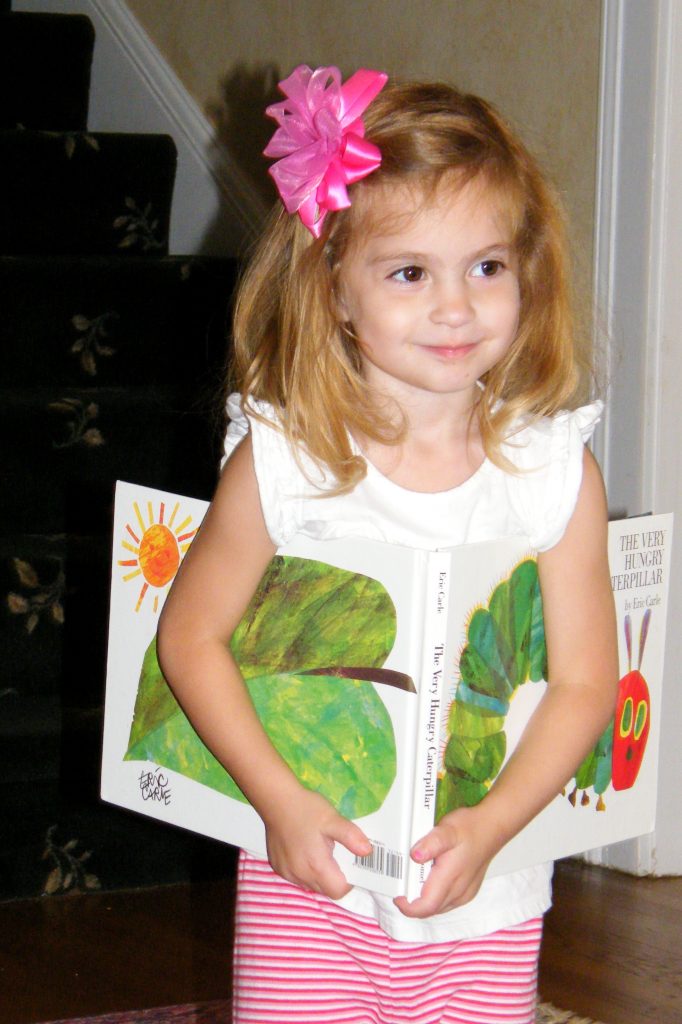 When I started teaching preschool in the early 1980s, my go-to book was The Very Hungry Caterpillar by Eric Carle. The two and three-year-olds loved it for its simple story of transformation from caterpillar to butterfly, the naughtiness of a caterpillar who eats too many goodies, and its repetitive language and predictability.

I created a puppet out of an old sock, glued on the caterpillar’s distinctive eyes, nose, and feelers (from pieces of felt), and turned it inside out to glue in a felt beautiful butterfly. The rest of the felt was used to make all of the food consumed by the caterpillar and the “nice green leaf” it eats after its feast. These things were lined up on a flannel board with the prompting of the children, who knew the exact order of the food. After stuffing all of that food into the mouth of my sock puppet, I pulled it up to create the cocoon and then (the grand finale) turned the sock inside out to reveal the “beautiful butterfly.”

The kids were mesmerized by my crude puppet every time. They knew exactly what would happen as I prompted them to tell the story along with me, but being preschoolers, they demanded repetition. Long after I had retired, my grandkids had the same reaction to my humble puppet. Again, again … they demanded the same performance.* 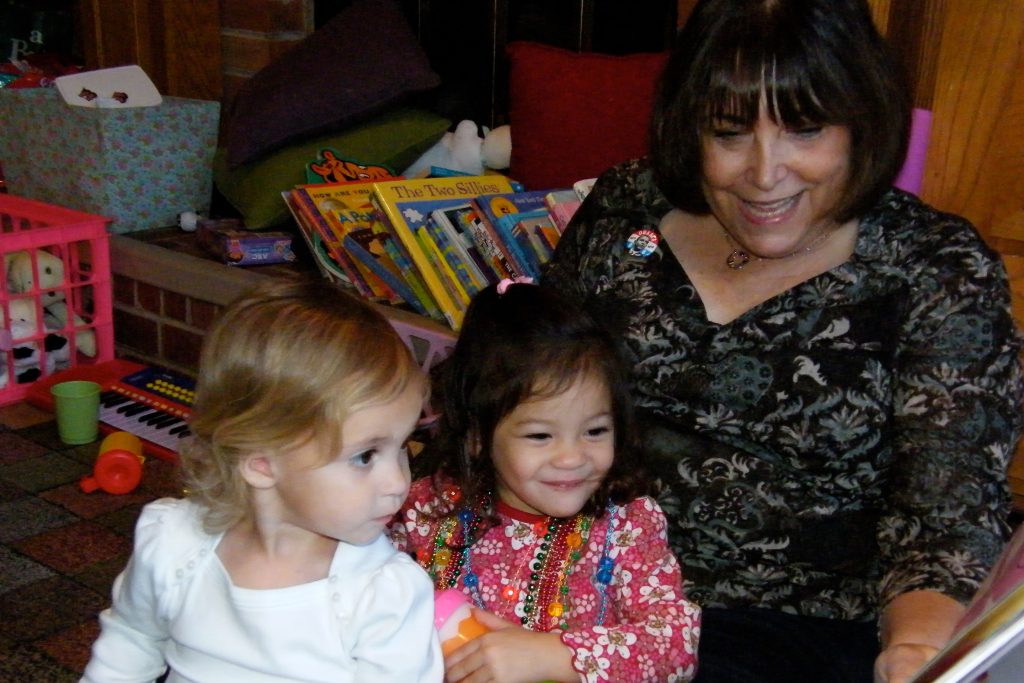 Reading to two of my granddaughters

Perhaps part of my motivation to become an early childhood educator was my love for children’s books. I still remember being moved by watching a little boy at the preschool sitting in the rocking chair, holding a baby doll on his lap. As he rocked his child, he “read” to it from a small book.  What a lucky child. Clearly, someone had read to him in the same loving manner. 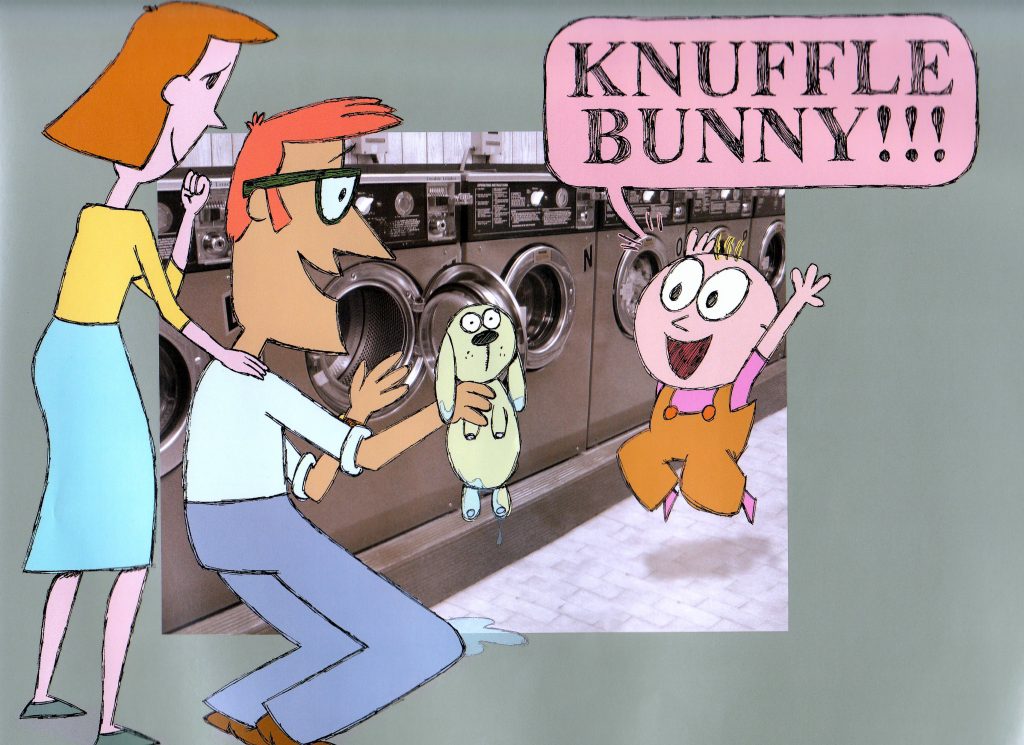 Becoming a grandparent gave me a chance for a do-over. I could never resist buying my grandkids books and discovered many wonderful new ones to go along with the classics I had read with their parents. They loved the Knuffle Bunny series by the wonderful Mo Willems in which a girl named Trixie’s attachment to her stuffed bunny carries her through speaking her first words to preschool to finally letting go of her lovie. Like her mother before her, the booka-booka girl became obsessed Cinderella. Rather than reading it to her hundreds of times, we sought out versions of that story from around the world (most cultures have one) and we took piles of beautifully illustrated books from the library. Several of her cousins loved the Tomie de Paolo series of Strega Nona books featuring the magical “Grandma Witch” and her bumbling helper, Big Anthony. With all of my grandsons, we read quite a few books featuring vehicles and dinosaurs. 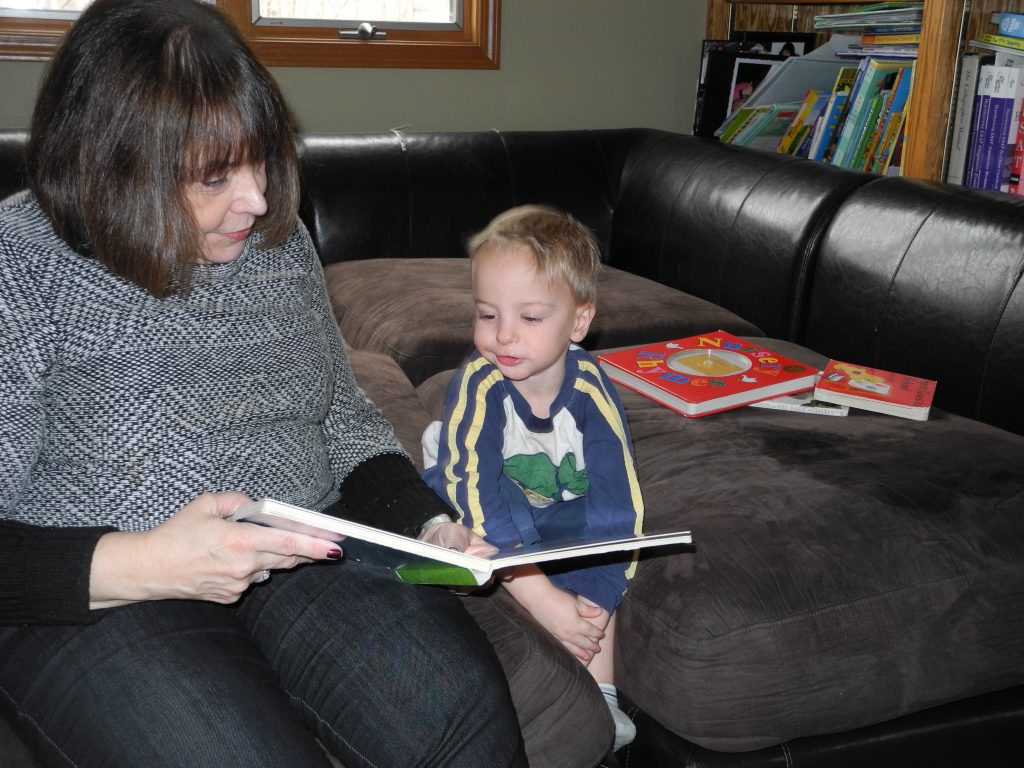 Dr. Seuss tells kids in I Can Read With My Eyes Shut,

If children see books in their homes, enjoy being read to, and end every night with a bedtime story, their love of these children’s books will create the foundation for literacy. And, like Leo the Late Bloomer, in their own good time they will learn to read themselves and experience the lifelong joy and knowledge books bring to their lives.

*Some readers requested photos of my Very Hungry Caterpillar puppet, which I found after I published my story in the back of a cabinet we moved from our old house to our condo. Remember, it’s over 35 years old! 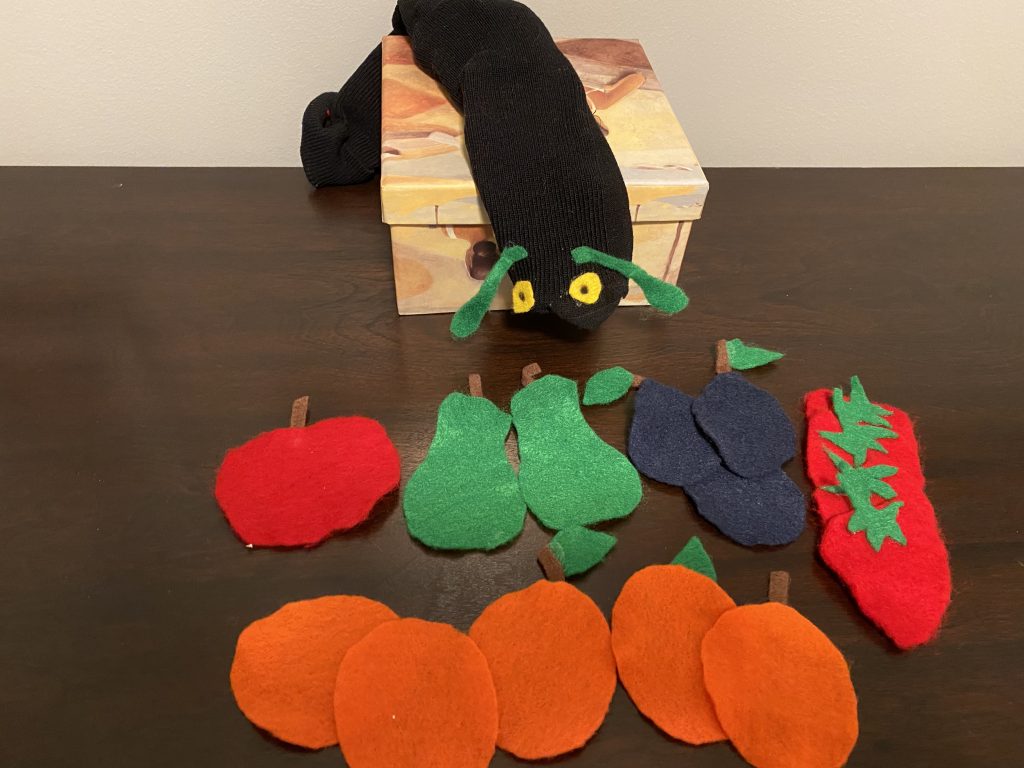 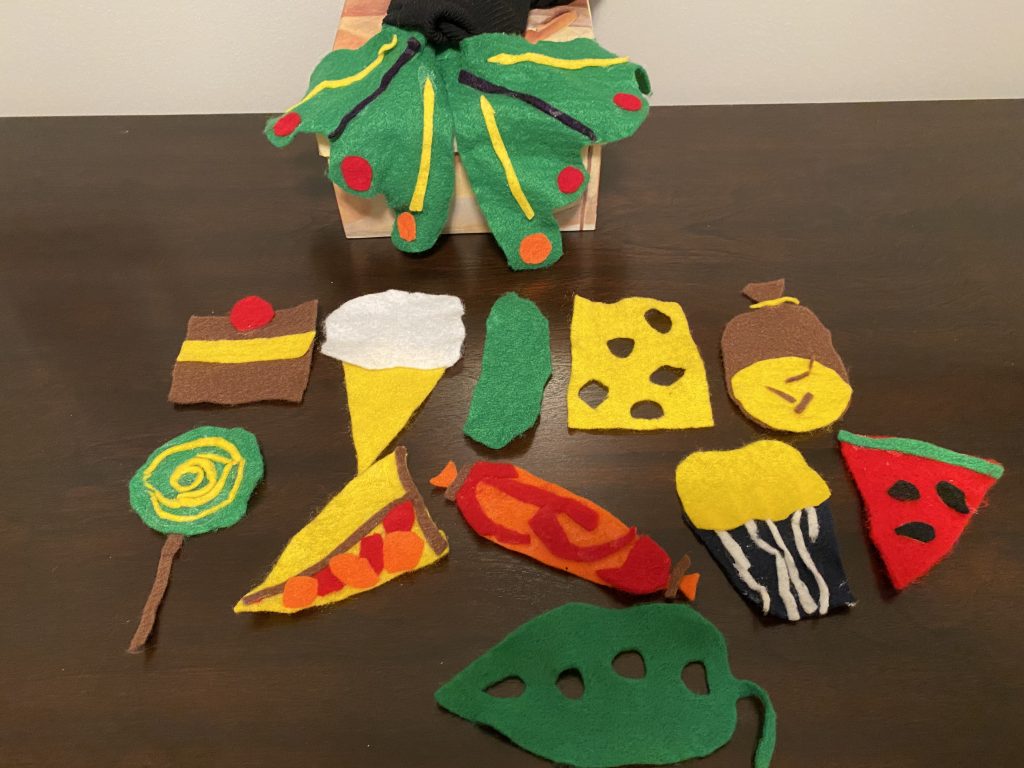