Prompted By What We Wore
12 comments. 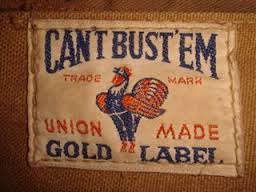 I still own a pair of black Can’t Bust ‘Em dungarees that I wore while working as a timber cutter at the Buckshot mine in Eldora, Colorado. I don’t wear them anymore — I’m a little beyond a 1970 waistline — but the rugged old pants still sport the brass buttons sewn onto the beltline to hold heavy red suspenders. I needed the suspenders to hold up the thick Can’t Bust ‘Ems — worn with waffle long johns underneath, two layered checked shirts, a heavy sheepskin vest and a Carhart “chore coat,” worn shiny by the Buckshot mine’s massive white pine timbers.

I lived and worked in a Rocky Mountain collective, it was October, and I wasn’t sporting bell-bottoms and a flowered shirt. My black Can’t Bust ‘Ems formed a sturdy counterculture variant, drawn from back-to-the-land necessities in an extreme climate, where all — regardless of background — worked with their hands to civilize rickety cabins, coax ancient trucks to life, haul wood, water and coal, and wield a chain saw. My Can’t Bust ‘Em uniform provided me with a warm and loose-fitting costume for those wind-driven days at Eldora’s Buckshot mine.

In 1970, Eldora was an abandoned mining town built within shotgun range of the Continental Divide. The mine was called the Buckshot in honor of the wind that roared through the narrow venturi between the rocky top of the Divide and the dense jetstream air above.

One year earlier, a quiet clairvoyant named Arthur Sigismunde bought the Buckshot. He was convinced that the old diggings still contained ore. It was possible. Previous to our counterculture endeavor, work on the Buckshot had come to an abrupt halt in the 1950s after the two owners had gotten into an argument. While one partner drove his truck down to Denver to talk to his lawyer, the second partner drank himself nasty and lowered a bucket of dynamite with a lit fuse halfway down the vertical mine shaft. The resulting concussion sent splintered mine timbers, copper wire, galvanized pipe and a cascade of gravel, granite, and mud spilling hundreds of feet down the shaft where the whole mess fused into a massive “plug” that blocked access to the ore below.

In an alleged fit of extrasensory clarity, Sigismunde had visualized masses of rich, silver ore pulsating below the plug. He managed to convince a clique of Denver entrepreneurs, men who could smell the romance of silver in the mountains and had money to spend. Sigismunde avoided hiring high-waged miners who belonged to the United Mine Workers. Instead, he hired Eddie Williams to run the operation.

Eddie was a pal of mine. He sported a similar, lived-in uniform to mine, replete with jeans, heavy suspenders and half-leather, half-rubber boots with felt linings for the winter and sweat socks in the summer. He called them “duck boots” and loved to comment that — except for his boots — it was rare to find a duck at 11,000 feet. Eddie was my age but loved to play old-time and was considered a genuine character in the fringes of Boulder’s academic aristocracy.

Boulder’s tiny cadre of literati marveled at Eddie’s “natural” intelligence and unpretentious, cut-to-the-chase style. He and Sigismunde had drifted through many a notable conversation at Boulder parties and Eddie had done a stint as a hard rock miner somewhere in his enigmatic past. So authentic did he appear, that few knew he had been disinherited as the black-sheep son of a Boulder professor emeritus.

Eddie immediately engaged a handful other counterculture workers from the collective. The amateur miners were supposed to re-timber the mine and untangle the mass of dynamited debris that hung, suspended precariously 800 feet above the bottom of the Buckshot’s shaft. Eddie and the others were literally dismantling the floor they stood on. Far above, on the surface, dressed in my layers of underwear, Can’t Bust ‘Ems, checked shirts, burnished leather vest, chore coat, and a blue watch cap, I roared through timbers with my screaming Stihl, ecstatic with the intensity of our wild adventure into the Colorado quartz, while the wind catapulted the sawdust past my leather- and wool-clad shoulders, over my blue watch cap and steel-toed boots, blowing like snow down the hillside.

Never had I lived further from a pair of bellbottoms.

Read more of my work at my web site and peruse excerpts of my ‘resistance’ series @ my Amazon author page.