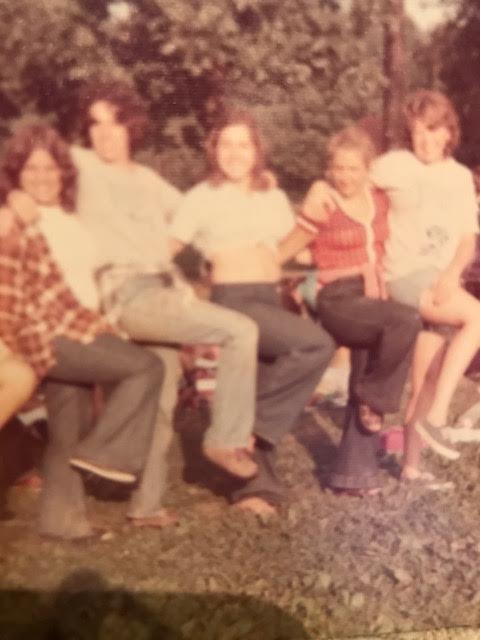 The Pioneer Counselors (minus me…I took the photo)

The summer before my senior year in college I worked as a counselor at a Jewish overnight camp near Ann Arbor, MI called Camp Tamarack. I was assigned to a cabin in the Pioneer Girls, the oldest girls at the camp. The group was situated a little away from the main camp. There was no electricity in the cabin, a covered area with a large trough for a sink on one side, a shower area on the other served for our clean-up. Toilets were private, but this was roughing it. This was also a time when Clairol Herbal Essence shampoo smelled floral and the bees kept trying to pollinate my hair.

My girls were 12 years old. Having been to overnight camp myself for years, I helped them adjust so they wouldn’t be homesick, tried to get them to be a cohesive group…no mean girl antics in any of my groups. Our cabins had our own dining hall and fridge. Though this was a kosher camp, none of our counselors were religious and we sneaked milk with meat (oh heavens!) I sang songs to my girls. “Jeremiah was a Bull Frog” was a favorite, but I also did “Hey Big Spender” from “Sweet Charity”. That got rave reviews.

I was a Theatre major in college, would be student teaching the next semester, so I was assigned to help the Drama counselor. She had the kids acting out stupid things, which drove me crazy. I wanted to challenge them. I had them acting out e. e. cummings poems. The Drama counselor and I did not get along. We did not put on a play during any of the three 20 day sessions. By the third session, I transferred to Arts & Crafts. I was much happier doing clay figures. I like to be appreciated.

Lenny was the head of the camp. He had been there for years and he appreciated me; a bit too much. He and Linda, the head of my division, had been an item the summer before but no longer were. She still wanted to be. I was already very seriously involved with Dan, the man I would marry a year later, but he was back in Boston. We wrote a lot, and called occasionally. I had ZERO interest in Lenny and assured Linda of that. Nevertheless, he persisted and paid me a lot of attention. I was polite, but did not return the interest and reminded everyone of my boyfriend back east.

At the beginning of the summer, I remained back in the division after lights out, writing to Dan. After a while, that grew dull. There wasn’t that much to write about night after night. I developed a friendship with Kitchen Mitch, the head of the kitchen. He, also, had been there forever. The cooks had seen him grow up and he was their special boy. He was now a wild-haired pot-head, utterly charming and lots of fun. He had a girlfriend back at Miami of Ohio and a Carmen Ghia. Because we became friends, the cooks gave me access to the large walk-in refrigerators (though I was trying to diet off 10 extra pounds, which I did). 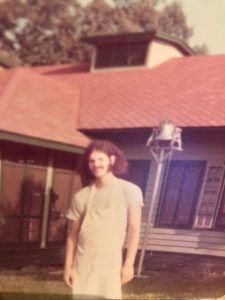 I attained a magical status through my association with Mitch. After the kids were in bed and the kitchen was spotless, Mitch and his kitchen team would go driving in his sports car and get stoned. They called it “cruisin’ for burgers and broads”. I soon joined the pack; the only female allowed along. I toked up more that summer than I did the rest of my life, I am quite certain. I promised to duck down if they found any “broads”. That never became an issue. Cruising in Michigan is an art form, not unlike Southern California, and we just enjoyed driving along the open roads, listening to tunes.

I came back to my division one night, stoned out of my mind. I stood at the trough, washing my face. As I turned to look at the mirror on the wall behind me, a rustle caught my attention. I looked down and saw a huge, well-fed raccoon. “What the f**k do you want?” I’m sure the feeling was mutual. He lumbered off. I was too stoned to be rattled by the encounter.

We had a few Israeli boys as counselors too. During the third session, we held a camp carnival. That evening, various counselors performed acts. With one of the Israelis, I performed a dance number which we had choreographed earlier in the day. It was a mixture of Israeli folk dancing and modern dancing, ending with me hugging him tightly around the waist with my legs, while he twirled around, my body swinging loosely, my long hair flailing behind me. I had a tambourine with a scarf attached and wore one of my mother’s old dance costumes. We made quite a duo. 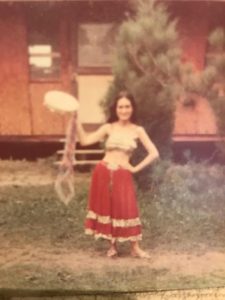 Some nights our pack, plus other counselors wound up in Mitch’s room, which held one of the few TVs at camp, and we whiled away the evening watching old movies. The summer wound down that way, Lenny getting nowhere, me enjoying the company of the kitchen crew, trying to keep my girls happy and counting the days until I could get back to Brandeis and my guy.

6 Responses to Cruisin’ for Burgers and Broads