Summer camp was a major part of my childhood experience. Not only the eight weeks I spent there each summer, but the letters back and forth to camp friends for the other ten months of the year. We poured out our hearts to each other in ways that we would never do with friends at home. I wish I had those letters now.

The first camp I attended was Camp Wasigan, in Blairstown, New Jersey. I went there in 1959 and 1960, when I was almost-8 and almost-9. (My birthday is at the end of August, which was so unfair, because I never got to celebrate at camp OR at school. But that’s another story.) It was a fairly small camp, eight cabins for girls and eight for boys, although at the time it seemed huge to me. This camp was what was known in my family as an “acka-wacka-bicka-wacka” camp. Not sure where the term came from, but it refers to camps where there are Native American (or as we said then, Indian) names for everything, and a “color war” for most of the summer, where the entire camp is divided up into two teams (“tribes”) that compete with each other in all aspects of camp life. At Wasigan each tribe had its own songs and cheers, some that were used every summer and some that were made up for the particular year. There were kids from both tribes in each cabin though, so you couldn’t be too competitive, because you had to get along with your cabinmates. Both summers that I went there, my tribe, Minnetonka, aka the Blue Team, was victorious over the other tribe, Mahowee, aka the Red Team, which felt very good to me. I can’t imagine what it must have been like to spend the whole summer competing and then lose the war. Two summers at that camp were enough for me, because by then I was old enough to go to . . . .

National Music Camp in Interlochen, Michigan, my second camp. My sisters and cousins had been going there for years, and I couldn’t wait until I was old enough to go. I went in 1961, 62, and 63, which I think was before John Z or Betsy got there. This camp was about as different from Wasigan as it could possibly be. It was enormous. I went there by plane instead of by bus. And it had uniforms and schedules and very strict rules. The uniform for the girls was a blue shirt (white shirt on Sundays), blue corduroy knickers, and high socks whose color denoted which division you were in — navy blue for Juniors, red for Intermediates, and light blue for High School. 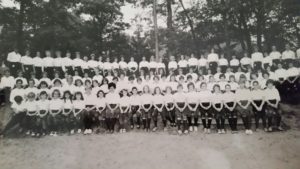 Schedules were decided in the spring, when we sent in our applications. As I recall, in the morning were the substantive classes, which were in the area of music, drama, dance, or art. In the afternoon were physical activities like archery and boating. Then in the evening there were always concerts or plays to attend, which you went to with your cabin. I know in various summers I took courses in drama, modern dance, choir, and orchestra. My first summer I took a fabulous course called Music Talent Exploration in which, over the course of the summer you got to try playing every single instrument in the orchestra for at least one day, even including the harp, and then pick the one you wanted to concentrate on. That was how I decided to play the oboe (which I still play!), and for the next two summers I played oboe in the orchestra, having taken lessons at home during the year. After three years there, it was time to move on, because my parents had gotten into a big argument with the administration, and we were persona non grata.

The last summer camp I went to was dramatically different from both of the previous camps. It was called Lincoln Farm Work Camp and was in Roscoe, New York, in the Catskill Mountains. This camp was just for teenagers, and was promoted as an alternative to conventional camps. It was founded by lefty New York schoolteachers who were friends of my aunt (also a lefty New York schoolteacher), and was made up almost entirely of affluent Jewish kids and African-American kids on scholarship. However, there was no sense of economic or racial differences among us campers. Julius and Ethel Rosenberg’s sons went to this camp, although they had a different last name by then, and we weren’t supposed to know that that was who they were. Leftist views and solidarity with workers permeated everything we did. Each week we chose different activities. In the mornings the choices were construction, farming, or forestry projects. (My first summer I worked on the construction of a new dormitory, and my second summer I lived in it. How cool is that?) In the afternoon we had typical camp activities like ceramics and painting and swimming, but also auto mechanics, woodworking, metal shop, and other skills that would help us be productive workers. We learned a lot about social justice, and sang protest songs from the civil rights and labor movements. We performed an original oratorio about Martin Luther King and his I Have A Dream speech. Every weekend we took overnight trips to interesting places like the Pennsylvania Dutch country and Montreal, and we rode there in the back of big open trucks that had bales of hay to sit on. There was always at least one guitar in the truck, and we sang for hours.

All three camps I went to gave me valuable experiences, but Lincoln Farm had the most profound influence on me. It shaped the political beliefs which I still hold to this day, about freedom and justice and equality. It opened my eyes to so many things. And after working on many construction projects, I’m pretty darn good with a hammer and nails!

8 Responses to In The Summertime