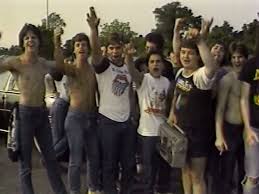 One of my college summer jobs was as a counselor at a YMCA day camp in Phoenix, AZ. Entrusted to me, a 20-year old college sophomore, was a group of twenty boys ranging in age from 8 to 14, to be watched over and entertained from 9 to 4. After a few weeks, the older boys started bringing a boom box to camp to liven up the ‘Arts & Crafts’ sessions that were, to be honest, geared more to the young boys than them. They loved listening to heavy metal rock: MegaDeath, Metallica, Iron Maiden. Some sported T-shirts emblazoned with their favorite band logos and frightening images like bleeding skulls. One day, one of them asked me: “Hey Mr. Braum, do you like heavy metal?” Without much thought, I replied: “No, not really,” and continued to help the younger boys with their craft projects. The next day, these boys stopped bringing the boom box to camp and I never saw another scary heavy metal concert T-shirt. I had no idea why, but one of the mothers clued me in one day during evening pick-up. “My boy told me that you don’t think heavy metal is cool, and so he and his friends decided that it’s not cool, either.” She smiled at me. “Thank you,” she whispered as she turned to walk back to her car with her son. Alarmed by my apparent power over these boys, I fretted over everything I said to the group from then on.

A summer camp counselor realizes the impact he has on his charges.

Another evening, a father picked up his son, who occasionally bullied other kids and often distracted the rest of the group with his antics. When the father asked me about his son’s behavior in camp I told him the truth, hoping that he would have a word with his son and thus make the remainder of the summer camp a little easier for me to manage. I watched him walk away with his son to the parking lot, talking intently to his son. But when they arrived at their car, I watched in horror as the dad pummeled his son repeatedly with heavy blows to the head and, after his son doubled over, to the back until the son sank to his knees, sobbing. The next day, when the dad asked me again about his son’s behavior during the day, I lied to him and told him that his son had been extremely well behaved.

5 Responses to The Power of Words