What is procrastination, really?

Random thoughts on why I’m a procrastinator.

This is a conversation I often have with myself. I’ll get back to you…

It’s why I don’t write more Retrospective stories, even though I want to. It’s why I put this very essay aside more than once, until long after the Retrospect “prompt” for procrastination had expired. Garrison Keillor says if you can’t make your body do what your mind decides to do, it’s all over. Food for thought? Extended thought? Take your time.

Until I first experienced cannabis in 1969, my junior year in college, everyone I knew told me I was too serious. I felt the need to change, so I tried. I grew a mustache, I broke up with _____ and took up with _____. I started cutting classes. I listened to more music. I quit the Young Republicans.

I knew a guy who was so smart that he would only skim his textbooks, then stay up all night before the exam, cramming. He got straight “A”s. I tried it, but without the same outcome.

My dad told me the hardest part of any task is starting it. He was right, of course, and I think it is especially true of writing. He also advised me to, as soon as I got to work, tackle the most difficult project first. Later in life, when I finally had a “real job,” I found that advice hard to follow, and often ended up staying late at the office as a result. I didn’t want to be like my dad, but, once I had kids, I found myself gradually (i.e., kicking and screaming) making the same compromises he had made.

Remember Be Here Now? It wasn’t just a book by the American guru Ram Dass (who was Richard Alpert in his earlier days as a Harvard psychology prof and sidekick of Timothy Leary). It was a catchphrase, a maxim, a mantra for the counter-cultural movement of the late 1960s and well into the 1970s. I should perhaps exempt the activist wing of the movement, but weren’t we all torn between fighting for a better future and seeking joy in the present? It was about letting go, giving up control. Wasn’t it?

Personally, I had so much hope for the Age of Aquarius that I was sure the whole society of the United States would change. I thought I would never have to wear a tie and work 40 hours a week. I didn’t want to conform (except to my own subculture). And didn’t we think life on a commune would be easier?

In college I took a course in comparative religions. I didn’t study for the test about eastern religions because — why bother? As the willow bends with the force of the brook, just go with the flow. It’s OK to be a passive, goal-free, nonjudgmental observer, tuning in to life on this planet and, above all, retaining your sense of wonder.

Like all my friends, I read Siddhartha, Narcissus and Goldmund, and the rest of 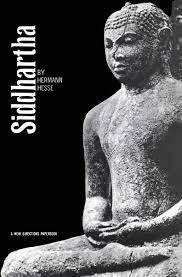 the novels by Herman Hesse. I read Alan Watts, Tom Robbins, Carlos Castaneda, and other authors who, each in his own way, was distilling Taoism, Buddhism, and Hinduism for readers in the western world. Some Native American beliefs, especially their awe of nature’s magic and their view that we are just part of nature, also fit in nicely. When I lived in San Francisco after college, I loved the poetry of Lao Tzu and Chuang Tzu. The message I heard from all these authors was loud and clear: Still the mind. Ambition is not a good thing. The pursuit of material wealth is hollow. In fact, all striving is futile because control is an illusion.

Even back in high school I was captivated by Henry David Thoreau. His writings made me question rat-race mores. Stop and smell the roses. I learned that one of the books he had on his shelf in that cabin at Walden Pond was The Bhagavad Gita.

I can even blame the Cold War for my procrastination. And I do. “Live for today” takes on a gut meaning when you’ve crouched under your elementary-school desk in a drill for a nuclear war that could incinerate you tomorrow. But I don’t want to downplay the emotional scars wrought on today’s kids by the COVID pandemic.

There’s the whole time thing, too. What is time? It’s an artificial construct, right?

“Know the true value of time; snatch, seize, and enjoy every moment of it. No idleness, no laziness, no procrastination; never put off till tomorrow what you can do today.” — attributed to Lord Chesterfield (1694-1773), in a 1749 letter to his son.

“Deep six your wristwatch, for the time it seems to measure is just the movement of its hands.” — The Grateful Dead.

“There’s no such thing as wasted time.” Who said that? Ken Kesey? Vonnegut? Leary?

Anyway, the last two quotations dovetail with the recreational use of hallucinogens. Seeing myself as a tiny speck in the universe took a load off my shoulders.

Despite all the ways to rationalize my procrastination, I do whip myself (not literally) for not accomplishing more. I have a little planner book — I call it my “little book”. In the space for each day, I write, in tiny letters, all the things I want to get done. It’s a guaranteed way to feel guilty all the time. Now that I’m retired, I supposedly have “all the time in the world,” but I can’t seem to get much done. Some days, I don’t even look at my “little book” — I rebel against its tyrannical entreaties to contact certain old friends; run certain errands; fix this; clean that; check out a particular book, website, or film… Every Saturday I carry forward all the uncompleted tasks to the following week or beyond. 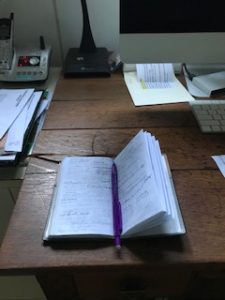 I’m trying to understand how my wife and I found the time to eat, sleep, and raise two kids, back when we were both working full-time jobs. Speaking of my wife, who belittles my “little book” rituals as neurotic, she maintains that she was sold “a bill of goods” (no receipt, luckily) when she decided to marry me. Her reasoning is that — get this — she fell in love with a “be here now” guy. That’s ironic, to my way of thinking. I was honestly trying to be that guy back then, in 1975, and we had a lot of fun together, come what may. Wait — I said I was trying, but was trying allowed? It’s pretty close to striving. Anyhow, come what may turned into here comes a baby. Does my wife seriously think I could have made a living and done the whole family thing as a “being here now” guy? Dinner plans? Hey, just be here now! Vacation plans? Be here now! Who will take our son to soccer practice tomorrow? Be here now!

So Instead, I caved. I delved down deep once things got real, at least deep enough to find remnants of ambition. I even ended up wearing a coat and tie, eventually.

In the weeks before my wife gave birth, we listened to Ram Dass lectures on cassette tapes. We loved him. He calmed us, made us ready to trust in whatever came next. OK, so we baby boomers were self-righteous and self-indulgent. Before we had real responsibilities, and even for years later, we looked down on “ordinary” Americans as Yahoos, Philistines. We were going to change the world. But we procrastinated.

Nowadays I find gardening, looking for new blooms on my plants, picking up fallen sticks, and otherwise puttering in the yard to be therapeutic, which really means I’m escaping from chores, and, temporarily, from the guilt and worries that come from not doing them.

As I age further, I find it harder and harder to set priorities. I guess I’m messed up. I have developed a beer belly, but I can’t seem to make myself exercise. Am I cruising for a bruising? Be here now!

Tags: Drugs, counter-culture, be here now
Characterizations: been there, right on!, well written

2 Responses to Desultory Ruminations on Procrastination

Save the Date
by Dana Susan Lehrman