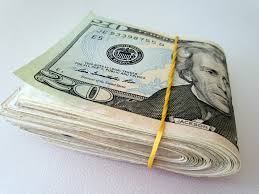 After Aunt Ruth passed away, my sister and cousin and I undertook one of Hercules’ labors…cleaning out her house.  Hoarder?  Raised during the Great Depression, she treasured material possessions not out of greed but as insurance against the spectre of want.  We tackled the easy things first, recycling piles of newspapers, uncovering caches of birthday cards saved through the years, and collecting the dozen-plus  magnifying glasses she placed strategically around the house.  My cousin drew the task of clearing the refrigerator of countless containers whose contents were unidentifiable.  The freezer was much the same, with added treats like packets wrapped in foil and pill bottles. The garbage bags got fatter.

We all know how important it is to listen to the little voices in our heads, right?  My cousin looked at me funny for a few moments, then turned back to one of the garbage bags and fished out a mystery foil packet.  With a deep breath she peeled it open and burst out laughing.  Inside?  Two hundred dollars in – excuse the expression – cold, hard cash. Motivated now, we all dove in with glee until at the final tally we had over two thousand bucks.

My cousin’s daughter breezed through the kitchen about then and said, “Oh yeah, you didn’t know about that?  But you know Aunt Ruth didn’t trust banks.  When we would go to the movies, or out for ice cream, she would stop first at the freezer and pull out some cash.  She called it her freezer money.”

We went on to find layers of buried treasure in that house. No more stashes of cash, but mementos of a life well lived. It yielded up her secrets, laid them bare for our admiration or guarded amusement. I don’t think I’ll adopt the practice of freezer money. But when it’s my kids’ turn to go through my stuff, I hope I will have remembered to leave them something to unearth that will make them laugh out loud.