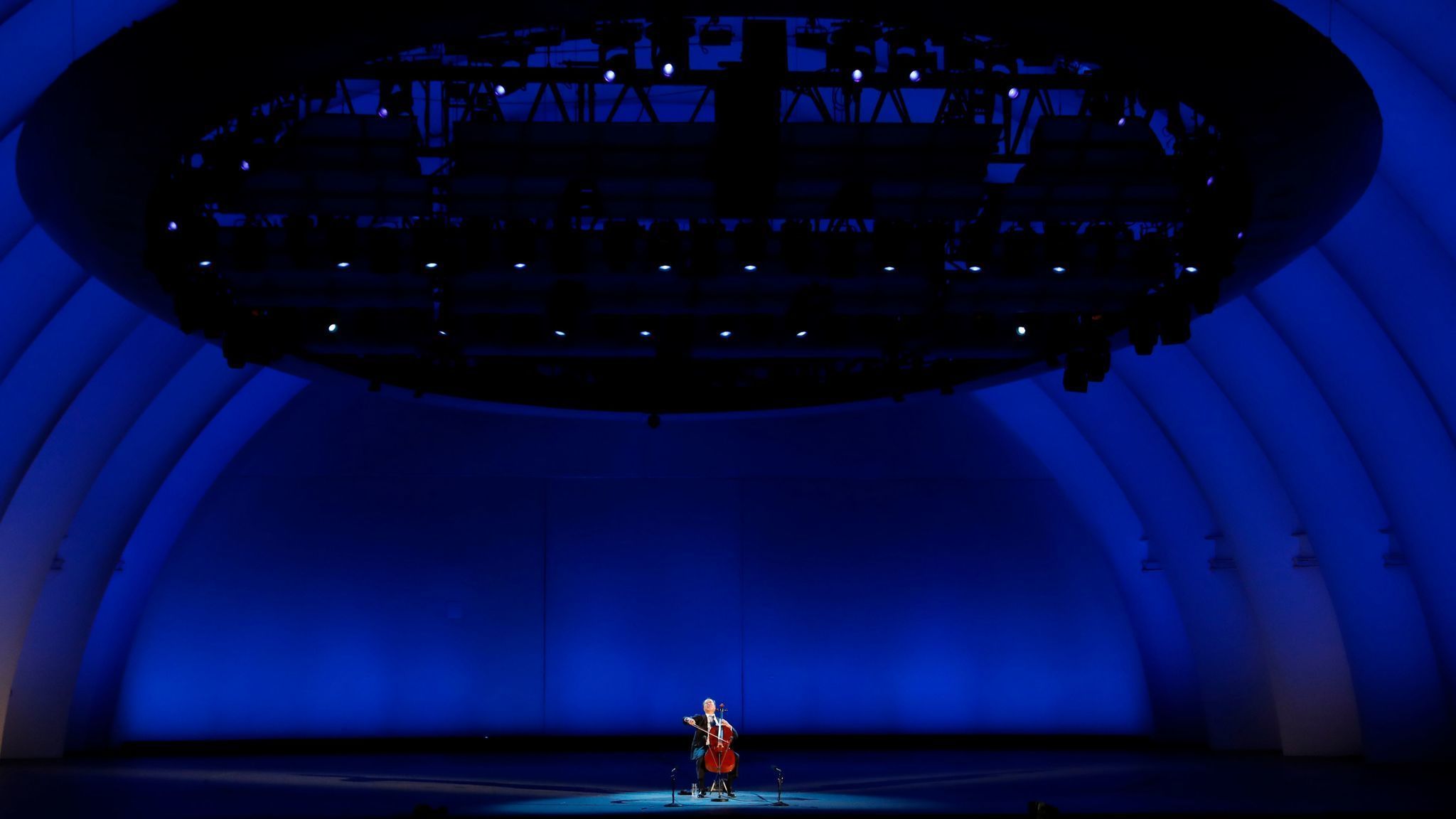 A soft, blue velvet regaled The Los Angeles night. The concentric circles of the Hollywood Bowl’s procenium glowed with a warm, eggshell white. White-jacketed waiters served last suppers on trays and scuttled away. Onstage, two microphones bracketed a single, straight-backed chair. Without announcement, a man in white tie and tails walked from stage right, carrying a cello burnished by age and a rich orange-red hue.

The lights dimmed and the concave shell of the Bowl changed to the same blue velvet as the color of the Angeleno sky. The man sat down, placed the instrument between his knees, and smiled at the amphitheater’s masses. He placed the bow on the strings, took a breath, and began the first notes of the first movement of Bach’s Cello Suite #1 in G major. 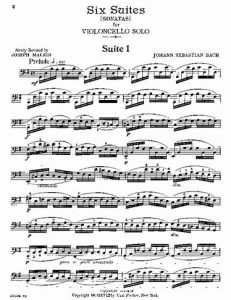 For two hours and 40 minutes, the Hollywood Bowl reverberated to the arpeggios, octaves, and double stops of Bach’s baroque homage to this perfect instrument. The tiny man played on through the intricacies of each suite’s preludes, allemandes, courantes, sarabandes, bourrées, and gigues. When he finished each composition, he launched into the next.

The cello’s rich sound, meticulously amplified, flowed out of the bowl and into the sky. I became aware of layer after layer of impressions — the diminutive figure’s exertions with bow and digits on the ebony fingerboard; the complex timbre and overtones of the instrument; the shape of the sound that rippled out of the layered arcs of the Bowl’s shell; the shower of notes falling onto the placid surface of the warm night; the musician’s synapses sparking with memory and tactile application. 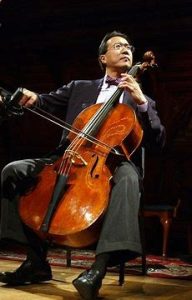 Bach’s cello suites are arranged in order of difficulty, the first being the simplest, continuing through over two hours of notation to the most complex. As he traversed this experimental composition — Bach had rarely written for solo stringed instruments — I became aware of a larger reality: I could trace the sounds of the suites backward, from the vibration of the instrument: the strings oscillating the bridge, which, in turn, vibrated the soundboard, passing through the unseen sound peg placed beneath one foot of the bridge between front soundboard and the cello’s back. I followed the sound into the player’s movements along the neck, where Ma’s fingers altered the resonating length of each string, set in motion by the horsehair bow. From these touch points, I followed his fingers backward through the tendons to the shoulders, each moving independently in their contrary tasks, the strong, smooth sweeps of the bow, the muscular attack of fingers on strings.

I felt the flow of impulses from Yo Yo’s right auditory cortex upward through the top of his skull and into the cosmos where elapsed time disappeared, and Ma’s movements connected to the cerebral energy of the old composer who sat, meticulously present through three hundred irrelevant years of calibrated time. Yo Yo Ma’s boundless energy (he began to tire slightly in the sixth and final suite), radiated the cascading arpeggios of Bach’s composition through the fragile endurance of the Stradivarius instrument, older than the Suites themselves. My senses began to swirl around the focal point of the single man, alone with the rich, red instrument, a unity of precision and love, given to us all beneath the vast, blue arc of the Hollywood Bowl. I suppose I sat as close to my own, weird god as I ever come.