Gates of Eden: the genesis of an antiwar novel* by Charles Degelman
100
(148 Stories)

Prompted By The Draft & Vietnam
9 comments. 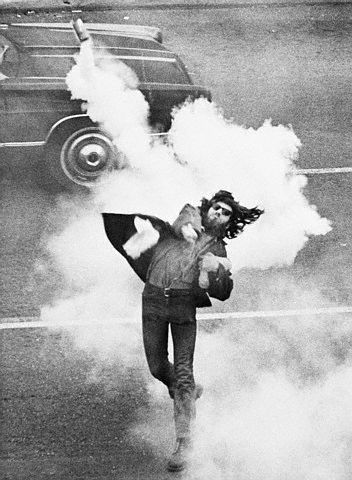 05 May 1970, Berkeley, California, USA — An anti-war demonstrator at the University of California, Berkeley throws a tear gas cannister at police during a student strike to protest the killing of 4 students at Kent State University. The Berkeley student demonstration is one of many across the nation in direct response to the killing of four Kent State University students by National Guardsmen during a Vietnam War demonstration the previous day. — Image by © Bettmann/CORBIS

My antiwar writing began in a theater. I was working on a new play and the antiwar movement of the 1960s came up in conversation. Several of the actors expressed amazement that there had been a determined movement to stop the war. One actor said something like “Wow! We just thought that all you guys did was smoke dope, get laid, and, like, drop out.” I felt my jaw clench and the veins on my neck popped into high relief.

I had already read much of the powerful library of fiction that came from Vietnamese and American soldiers who had fought each other and lived to tell the tale. But what about the war against the war? There was very little literature about the resistance.

I was aware that the accomplishments of the antiwar movement had been eroded by a booming corporate culture that had no time for the past and no room for resistance. And the actors’ ignorance about the antiwar movement reflected a long-term de-education of recent history. The Vietnam war demanded less each year in the nation’s history texts and television empowered law and order. Still, I was shocked by their response to the most powerful liberation movement in U.S. history. They didn’t even know it had happened! I decided to set the record straight.

I wanted to write about the resistance’s impact on the war, about the triumphs of feminism and environmentalism. We had broken the stranglehold on what was being taught at universities, demanded black and Chicano studies programs, womens’ studies. We had redefined the contemporary university as research and profit factories where students and faculty served as workers. With most of the rank and file faculty at our side, we had changed the curriculum!

I wanted to talk about all of that… and more! And so I sat down to write Gates of Eden, an episodic novel named after Bob Dylan’s stark song of corruption and decay. I felt that the resistance chose to stand outside the gates of Eden in defiance of a materialistic nation that called itself paradise while millions of Americans lived in poverty and while our leaders bombed a nation of farmers back to the Stone Age.

Gates’ characters I modeled on those who planned and marched at gigantic protests and demonstrations. They devoured life in bedrooms and ratty movement offices connected by FBI-tapped phones and stinking of mimeograph ink. They gathered in universities, collectives, communes, on city streets, and broadcast their positions in underground newspapers. They weren’t hippies, rock stars, or dropouts. They were artists, writers, street fighters, Viet vets, free thinkers, strategists, lost kids, people who took a look at what was going down and picked up the gauntlet to resist. To rebel. And, of course, to love. They told a different story.

I also wanted to counter misconceptions about the antiwar movement promulgated by popular culture. I think most people knew about the 1960s from films. “Easy Rider,” “Running on Empty,” “The Big Chill”… These were made by people who were building their careers, not fighting The Man.

Granted, many of these artists were talented and well-positioned to make their films. But without having been there — in the streets, in the ratty Movement offices, in the jails, in the free stores, on the communes and collectives with nothing but spaghetti to eat — their stories lacked authenticity. Often – like “Running on Empty” — they echoed the mission of the establishment — to revise, belittle, and to render impotent the real power and success of the antiwar movement.

Gates’ first outline included everything from the origins of the civil rights movement to the Cuban Revolution to People’s Park and every person, place, and anecdote in between. I knew I had to narrow the field. But I had become re-obsessed with the huge tapestry of the 60s, with my own recollections and the people, places, and events of the time. I had to turn this historical laundry list into a human, character-driven drama, get rid of my own, preachy didacticism and let my characters tell their stories. And I had to tell it like it really was, not like the mainstream portrayals.

At the same time, a lot of people didn’t know much about the war, the antiwar movement, and its impact. I couldn’t just ignore history. Instead, I set out to carry it through the characters’ actions, words, and conflicts. I also added “Masters of War” chapters where readers get to spy on the power brokers, the men who made the decisions to continue the colonial war in Vietnam, to escalate it, and make it look like a war worth waging. 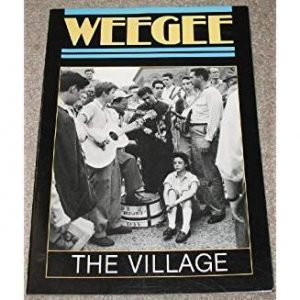 None of these characters are me. Or any of my friends. They’re all hybrids whose characters grew as I wrote. Some faded while others wouldn’t shut up. Madeline, for example, a young Greenwich Village poetess, jumped out of a Weegee photograph I was using to set a folk music scene in Washington Square Park. She just wouldn’t sit still and she wouldn’t shut up, so she became one of Gates’ major protagonists. I invented other characters because I wanted to represent the diversity of the movement, from returning, radicalized vets to COINTELPRO spies and conservative parents.

As I wrote, I hoped Gates would be an exciting book. Certainly, a lot of love, research, imagination, and hard work went into telling a largely untold tale. And, as with all novels, I hoped Gates would transport its readers into a different landscape so gripping and powerful and so delicious that they would make the journey from beginning to end.

*Adapted from an interview conducted on Pacifica Radio.

9 Responses to Gates of Eden: the genesis of an antiwar novel*