Prompted By What We Read
9 comments. 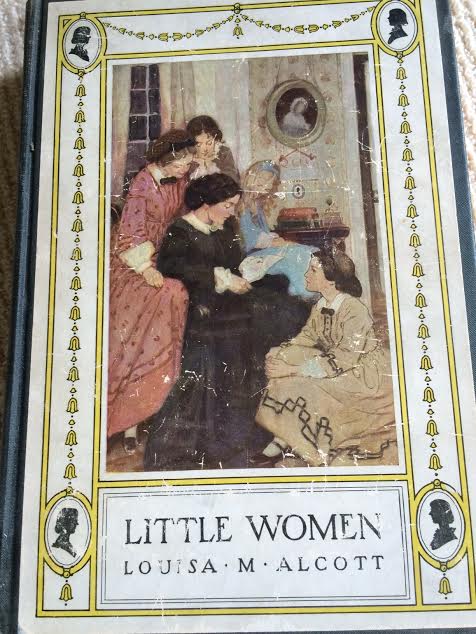 I was an exuberant reader, often reading by flashlight under the covers when I was supposed to be sleeping. I heard my 3rd grade teacher telling someone in the school hallway that I tested at a 10th grade level at that tender age. I loved “girl” books and there were plenty in my household, hand-me-downs from my mother, older cousins, even a neighbor, who I sought out when my older son attended Stanford. She had gone there ages ago. I still have a childhood book with her handwriting in it. I copied it and sent it to her (I got her address from her parents, now gone). She was truly touched and made her way from Berkeley to Palo Alto to say hello when we first visited David, more than a decade ago. So here are my favorite childhood books.

Little Women, Louisa May Alcott. My mother’s 1922 edition, a beloved birthday present from her brother. she wouldn’t part with her copy until after her death. I went through a phase where I wanted to be called Beth instead of Betsy (we are both Elizabeths) for the doomed sister. I now live about a half hour from Concord, MA, real home to the Alcotts. I can visit Orchard House, where the book was written. It is a museum, open to the public. I once took a visiting friend and was lucky enough to be there on a day when an actual dress worn by the oldest sister (Meg in the book) was out on display, as that was her wedding anniversary!

Gone with the Wind, Margaret Mitchell. My mother’s 1936 SECOND edition (one month too late…it would be worth a lot of money if she’d jumped on it a month earlier; also without the dust jacket). I began reading this on Yom Kippur in 8th grade, the first time I fasted on the holiest day of the Jewish year. I had all afternoon with nothing to do and the book consumed me. We were studying American History in class and this seemed like the perfect complement. It would be years before I’d see the movie, which, though great, paled in comparison to this florid epic.

Mary Poppins, P.L. Travers. The first four volumes. Two of them came from my oldest maternal first cousin. One states that printing was held up because of WWII. I discovered there were two more in the series and devoured them. I loved the whimsy and fantasy. I was quite young when I read them, long before the Disney movie. I only discovered that Travers wrote more than these four books after seeing the movie “Saving Mr. Banks”!

Charlotte’s Web, E.B. White. This book was read aloud to us by Mrs. Zeve, my 2nd grade, and favorite teacher. She gave different voices to each character. She encouraged me to explore acting, which became my passion. Wearing glasses was OK because she wore them. I adored her and we stayed friends for the next 10 years. She came to see me in my high school plays, exchanged birthday cards (her’s was two days before mine), until my senior year in high school. It seemed odd that I hadn’t heard from her in December. My mother got a phone call two months later. My beloved Mrs. Zeve had died of stomach cancer at the age of 42. I still can’t watch any version of “Charlotte’s Web”, as I don’t want anything to interfere with hearing her character voices in my head.

The Little Prince, Antoine de Saint-Exupery. We read this in French class in its original language. We all loved the sweet message and I bought an English version, which I cherish. It resonated with us in the late 60s.