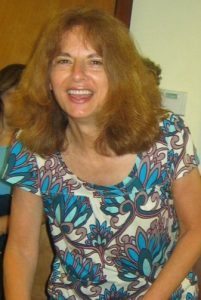 On March 10, 2008, I had my annual mammogram. Never a pleasant experience, but tolerable, and I dutifully went every year without giving it much thought. That year was different. A few days afterwards the imaging center called me and said they wanted to do another mammogram of my right breast, so on March 20 I went back and did it again. Then they said, hmmm, we’re not sure what we’re seeing, so we want to do a core biopsy. I had this done on March 27.

The next thing that happened was that I got a call from my primary-care physician’s office, saying she wanted me to come in for an appointment with her, and I shouldn’t come alone. I couldn’t get them to tell me anything more, but I knew they wouldn’t say “don’t come alone” if they were going to give me good news. When I showed up for the appointment, and the receptionist asked what I was being seen for, I said “I don’t know, you tell me, this wasn’t my idea — I was summoned by Dr. Garcia.” I was angry that I had to come to the office, and even angrier at the questioning by the receptionist. Couldn’t they have put a note in the file so she wouldn’t ask me that?

The doctor said the biopsy was malignant, and she would refer me to an oncologist. She didn’t know the answers to any of the questions my husband and I asked. So basically, the visit was worthless and a complete waste of time. She could have told me this over the phone, and saved me the trip and the $15 co-pay. Apparently they are not supposed to give bad news over the phone, for fear the recipient will do something rash.

In the several days between talking to the PCP and meeting with the oncologist, my brain was spinning. I had cancer. Growing up, cancer had been considered a death sentence. People didn’t even like to say the word, whispering it or referring to it as “the C-word.” I was certain that I was going to die. I knew I didn’t want to have chemotherapy, I had seen too many friends have horrible experiences with it, and what was the point, I was going to die anyway. I made my peace with dying. My kids would be okay, that was the most important consideration. Sabrina was in graduate school in England, Ben was at Harvard, and Molly, although only in sixth grade, would be fine with her father. I could relax and just accept my death.

However, the lengthy discussion with the oncologist, when that finally happened, gave me a different perspective. What I had was called DCIS, Ductal Carcinoma In Situ, which was the very earliest stage of breast cancer, and could be resolved with outpatient surgery and a course of radiation. No chemotherapy required, and all quite simple. Sure wish I had gotten this news in the first place! This was so much better than I expected that it never occurred to me to research DCIS or question whether I even needed surgery.

On April 22, just six weeks after my original mammogram, I went to UC Davis Medical Center for the procedure. On my calendar I see that I had to be there at 8:00 a.m., but for some reason the operation didn’t happen until the afternoon. I had a book with me, but after a while I got bored reading (or maybe I finished the book). I wandered around in my hospital gown until I found an unattended computer. As luck would have it, no password was required. While checking my email, I discovered a note from a friend inviting me to join facebook. So I did. He then started a Scrabble game on facebook with me, it was in beta testing at the time. Amusing that now, more than nine years later, that is my strongest memory of that day.

The next week I had a follow-up appointment with the surgeon. He informed me that the margins were not clear and he wanted to operate again. Since I had totally bought into the program, of course I said yes. The second surgery occurred on May 2, and for that one they wanted me there at 5:45 a.m.! I don’t know why, but that’s what it says on my calendar, and I guess I must have actually been there at that time, even though I am NOT an early-morning person. That surgery occurred more promptly, so I didn’t have time to wander around and get into any mischief.

I started radiation on May 21. It turned out the radiation oncologist was a friend of mine, a 1983 graduate of Harvard-Radcliffe, and an interviewer for the local Harvard Schools & Scholarships Committee, of which I am the chair. Seeing her familiar face was very reassuring. I had to go to radiation five days a week for six weeks, which was a little bit of a nuisance, but my time slot was 10:15 a.m, so I could easily take Molly to school and come back home before going there. My doctor friend was also willing to make the radiation schedule flexible for me, which another doctor might not have done. In mid-June we had a week planned at Stanford Sierra Camp, a wonderful family camp at Fallen Leaf Lake – that’s where the featured image was taken. At the end of June I was going with Molly’s Girl Scout troop on a four-day trip to Disneyland paid for by selling Girl Scout cookies. I wasn’t willing to miss either of these, but fortunately we were able to work the radiation schedule around them. By mid-July I was finished. I went to a couple of follow-up appointments, but then I stopped because they didn’t seem useful. I was ready to be done with the whole thing.

I didn’t tell anyone except my husband and kids about any of this until after it was all over. I didn’t want my mother to worry, and I certainly didn’t want anyone making a big fuss about it. (When I told Molly, early in the process, she only had two questions: would I still be able to take her to school, and would my hair fall out. Since the answers were “yes” and “no” respectively, she was happy.) Even now, I suspect that most people who know me have no idea that I had breast cancer. At least until they read this story.

Recently I have read some articles about DCIS, suggesting that it isn’t cancer at all, and there is no need to do anything about it. This made me upset that I had so gullibly gone along with what the doctors said. I guess growing up as a doctor’s daughter had given me the belief that doctors always knew best. Now I would be a little more skeptical. But it wasn’t a terrible experience overall, and maybe it stopped me from developing actual cancer, so there is not much point in being upset. In the words of Nietzsche – and the song by Kelly Clarkson – what does not kill us makes us stronger.

4 Responses to I Will Survive

Retreat, Isolate, and Shut Down
by Lou Moffett
The Kvetching Diseases
by Marian
Illness – Promises of Ice Cream
by kayakwalker