If I think long and hard enough, I can still summon up the feeling of the rubber mask sitting around my mouth and nose, and the odor of the cool ether hitting the back of my throat as I was being put to sleep for my surgery.  That was back in the 1950’s when tonsillectomies were the norm in the little town where I grew up in Vermont.

... the odor of the cool ether hitting the back of my throat

I was promised that I could have as much ice cream as I wanted after I got out of surgery.  I have no recollection of the ice cream, but I do remember a little boy across the hall from my room who was good at sharing.  He had a “View-Master”!  It was a binocular looking contraption, which when you peered through the eye sockets, you could see pictures of Disney animals or cartoons.  Just by clicking the button, it automatically forwarded the image to the next slide.  The images were in full color and had a 3D effect to them.  (Our family still had black and white television, so these little slides were quite amazing!)

I don’t recall how I made my way out of my bed and into the little boy’s room across the hall, but my memory is marked by hearing my mother call for me. She’d come in to see me on the day after surgery and I was not in my bed… not even in my room.  It was her calling that I remember the most, and her surprise when she found me with the little boy across the hall.

As I mentioned, I don’t recall receiving the ice cream I was promised.  I most likely did get some as we were a big ice cream-eating family (“creemies” as they are still called in those parts), but what I did want instead was a View-Master! 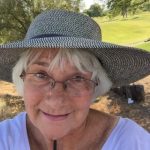 Retreat, Isolate, and Shut Down
by Lou Moffett

I Will Survive
by Suzy
The Kvetching Diseases
by Marian