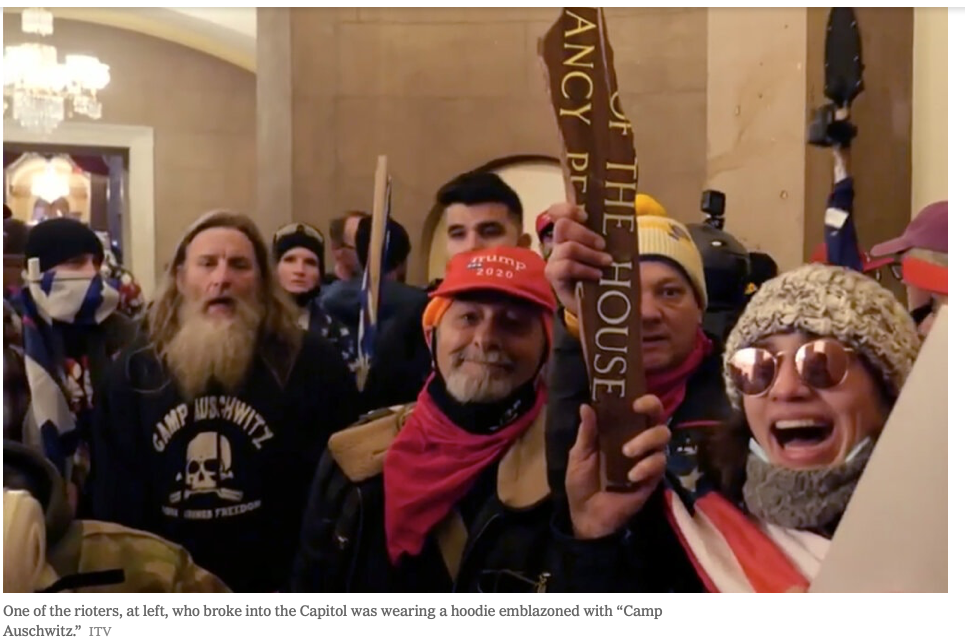 In 1946 George Orwell wrote, “Political language is designed to make lies sound truthful and murder respectable, and to give an appearance of solidity to pure wind.” He went on to complain of the ways political speech had largely become “the defense of the indefensible”. After 75 years his words seem more appropriate than ever; prescient even.

While in my car, I always listen to NPR. I usually don’t drive long distances, so only hear fragments of larger conversations. One day last summer, the program had on three distinguished political thinkers to discuss the current state of affairs. Each was asked to summarize the political parties in one word. I heard political scientist Norm Ornstein, a resident scholar, emetitus at the conservative think tank American Enterprise Institute call the Republican party a cult. He defined cult as a group held together by a shared commitment to a charismatic leader. In an op-ed in the Washington Post on January 14, Eugene Robinson wrote, “[The Republicans are] no longer a political party, but a dangerous cult” for not repudiating Trump’s lies.

I follow news closely but my sources are the New York Times, the Washington Post, the Boston Globe and the 6:30pm CBS newscast. By and large, I am not a cable news consumer, yet I stay informed. I was outraged though not surprised when Trump was caught on tape strong-arming the Secretary of State of Georgia into “finding” 11,780 non-existent ballots to give him a win in the state of GA. If he had done that in GA, it is possible he had done so in other battle ground states as well. We know he applied pressure in MI to certain Republican officials to not certify the votes in Macomb County, home of Detroit, which is majority Black. The Georgia phone call was an impeachable offense. It certainly violated Georgia state laws, but oh…never mind. Are you happy Susan Collins? Do you think after his first impeachment he learned his lesson and became a good boy?

None of my fellow Retrospect writers know what I do on Saturday mornings as these stories go live. When I decided to stop posting them to Facebook, I told the folks who faithfully follow along that I would email to them the morning they go live (I usually write the stories several weeks ahead). I just asked to let me know who wished to receive them. My readership has grown, as cousins learned that in some cases I tell family history, or they wanted to learn more about adult Betsy. Friends just liked my writing and asked to be added to the list. The list has grown and more than 22 people currently receive an email with the link to the story every week. Many respond and we have lively conversations. 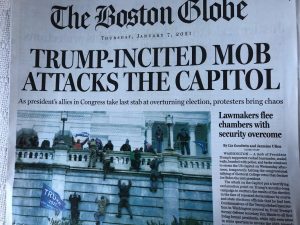 On January 9, I awoke at 4:37am, stewing about what I would say in the email I would write before sending the link for the prompt: “letter to my younger self” to my family and friends. I was so upset with the week’s events. I had to comment; I couldn’t let it pass. This is the email I sent:

“This is my 222nd story. I feel I can say with some authority that WORDS MATTER. Some of you have followed these musings for years and know they are a combination of personal history and commentary, depending on the prompt of the day. I do not shy away from difficult or personal subjects.

But this week was beyond the pale. A few high school friends, a year younger than me, commented on Facebook that Wednesday brought them back to 5th grade and the day of Kennedy’s assassination. I countered that Wednesday we did, indeed, witness history, but of a different kind. We witnessed an unfit president incite the mob he invited to Washington, D.C. on Dec. 19 via Twitter, as he continued his lies about stolen elections, incite an insurrection. He told this whipped up, frenzied crowd that he would join them as they marched up Pennsylvania Avenue to go to the Capitol and end the “steal” of his overwhelming victory, which his enablers, including some sitting in the august chambers of power at that moment as they continued to assure the mob (and many others watching at home) that this deranged man had won the November election in a landslide.

Never mind that every state had certified their votes, the courts had all ruled against those frivolous lawsuits. If you repeat a lie often enough, people come to believe it. It is Propaganda 101, the basic playbook of an authoritarian ruler. Someday we need to return to the truth! Facts matter! We cannot continue to live in alternative universes where people are allowed to spout outright lies and convince millions of people that what they say is the truth when objective facts say otherwise. WORDS MATTER!

I do not watch TV during the day, and almost never watch cable news, but I wanted to catch up on the important Georgia run-offs. Warnock had been declared the winner of his, but in Ossoff’s race, though he was ahead, it was still too close to call. So after my Zoom exercise class, I turned on CNN to check in. I was delighted with the results and decided to stay to see the beginning of the Electoral College certification process. I enjoy watching history in the making. Sure enough, they only got to the third state: Arizona, when the first objection came up, the chambers split up for two hours of debate and I heard the first four speeches including Cruz’s slimy reasoning (“voters have doubts”…gee, where did those come from I wonder, after so many months of you and your co-conspirators, and the right-wing media spewing lies?) when all hell broke loose. I sat, transfixed, with horror for the rest of the day, like so many of you, I’m sure.”

I segued to the prompt for the day.

The day after the horror in the Capitol, my son David and some of his Stanford friends put together a petition to ban Josh Hawley, ’02 from their Alumni Association. My son’s was the fifth name on the petition (though it has since been arranged alphabetically) that now numbers hundreds, including their Dean of Admissions and Issa Rae. It is being spread person to person. If you click on the note below, you will be able to read the petition. 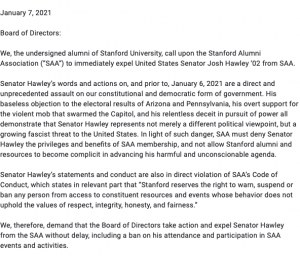 The stories now come out; more will surface I’m sure. Some are horribly disturbing. New member of the House and QAnon follower, Lauren Boebert (R, CO) tweeted at the beginning “Today is 1776”. The terrorists (ignorant as they are of history) think of themselves as patriots (which is what Ivanka called them in a now-deleted tweet). They don’t know that the American Revolution began in 1775 in Lexington and Concord, MA when the first shots were fired and we rose up against King George III to become a new nation, even if the Declaration of Independence was written in 1776. This was the first invasion of the Capitol since the British stormed it in 1814 during the War of 1812. Yeah, real patriots. Ms. Boebert evidently live-tweeted Speaker Pelosi’s location to the mob during the invasion, putting her in grave danger. Photos recently surfaced of Boebert on the steps of the Capitol with a group, including some who were part of the insurrection, the day before the event. Five people wound up dead as a result of the invasion.

The mob chanted “Hang Mike Pence” and erected a gallows to do just that, egged on by Trump tweeting derogatory things about his VP. Pence has been the most loyal lackey to Trump and though he went several days without speaking to his boss, refused to invoke the 25th Amendment, for fear of damaging his own political future with these deranged followers.

The “Stop the Steal” organizer of the “rally” says he coordinated with Congressmen Mo Brooks (R, Al), who spoke at the rally, Paul Goser (R, AZ), and Andy Biggs (R, AZ), who all helped to plan this “rally”.

The Democrats, joined by ten Republicans, one week after the violent attack on the Capitol, impeached Trump for inciting an insurrection. On the day of the attack, Trump, after much prodding, asked his mob to go home, told them he loved them and that they are very special. Days later, perhaps aware there may be legal consequences to his actions, belatedly called for calm during the inauguration. He lit this fire and now cannot put it out. He sat in the White House while the mob attacked the Capitol, enjoying the spectacle (he always loved World Wide Wrestling – wasn’t this the same; reality TV on steroids?), only remarking that those looked like low-class people. He didn’t like that.

Congresswoman Mikie Sherrill (D, NJ), a combat veteran posted a message on Facebook Live on January 12 that she noticed several members of the House giving unusually large group tours on January 5, which she called “reconnaissance”. She and many other members of the House have called for an investigation. Since the Coronavirus pandemic, admission into the Capitol has been restricted, with limited tours. So not only were members of the House complicit with their speeches and votes, it appears they aided and abetted the insurrection. When I was a kid, my family took a trip to Washington, D.C. and visited with our Congressman. I assure you, he did NOT give us a personal tour of the Capitol. 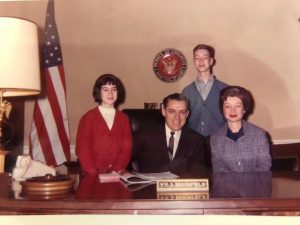 1965, visit with our Congressman, William Broomfield in the US Capitol.

The perpetrators, including Congressmen and Senators must be held accountable to the full extent of the law. Our democracy truly hangs in the balance.