Prompted By What We Watched
7 comments. 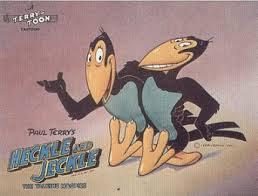 Manys the time I woke up super early on Saturday morning and turned on the TV before the farm report even came on while mom and dad slept in. Cartoons were a lot trippier then and didn’t even seem particularly made for kids. There were Heckle and Jeckle and the really early Mighty Mouse and Micky Mouse stuff with dancing skeletons and little cars that bounced along to the music, tires not needing to stay round, characters with their bloomers showing, When I was little I had a recurring nightmare set in the Howdy Doody Show. Suddenly everyone realized the Grandfather Clock had a real bomb ticking away inside and the kids started to scramble off the bleachers of the Peanut Gallery but couldn’t get away before it went off. Since I survived, Buffalo Bob must have cut to a cartoon just in time, probably Popeye the Sailor Man.

Popeye had his Olive Oyl, SweePea, Wimpy, Bluto, the Sea Hag. An octopus villain could be pretty frightening. Many times I’d be outside playing and pretend to chug a can of spinach, then sing the few familiar little notes, duh da da da da duh daaahhhh, as I raised my fist in order to show my resulting bulging muscles. Robin Williams and Shelley Duval really did the characters proud in the movie IMO. I did a pretty good impression of Woody Woodpecker too, which must have been as much fun for the folks listening after the first half a dozen times as it was when kids were imitating Jar Jar Binks nowadays. Thought that would never die out.

I usually loved the side characters as much as the main ones. Rocky and Bullwinkle had not only the ones deemed spin-off worthy like Boris and Natasha, Mr. Peabody and His Boy, Sherman (I want a Way Back Machine), and Dudly Do Right with his Snidely Whiplash, but how about Captain Peter ‘Wrongway’ Peachfuzz, Edgar and Chauncy, Aesop and Son, Fractured Fairy Tales and that little guy sweeping up after the parade? 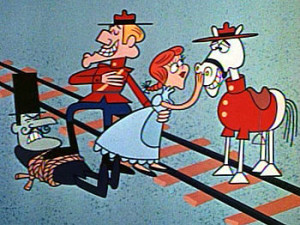 Brain dump, out of order and all over the place, Shari Lewis with Lamb Chop and Charlie Horse, Ruff and Ready, Always Tough and Steady, who would sometimes visit the planet of Munimula (aluminum spelled backwards), Beany and Cecil the Sea-sick Sea Serpent with bongo playing beatnik artist, Go Man Van Gogh, the amazing opening songs to Top Cat (https://www.youtube.com/watch?v=gTyTkD1Pz_E) and The Mighty Hercules (https://www.youtube.com/watch?v=4PrLVgR6J84). Auggie Doggie and Doggy Daddie, Yogi Bear saying,”Let’s go get some pic-a-nic baskets, Boo Boo,” and Boo Boo replying in that nasally voice, “But Yogi, you know what the Ranger said.” There was the futuristic Jetsons with a car that folded up into a briefcase, and way back in time Flintstones, with adult enough themes that it went to nighttime TV. Remember Snuffles, the dog on Quick Draw McGraw that would go insane when given a dog biscuit, hugging himself then shooting up in the air and slowly wafting down? Oh, oh, and Pepe Le Pew, the charming French skunk and would be ladies man? I’m barely scratching the surface of the subject here.

There was a change in quality of the children’s shows by the time Thunderbirds came along, and He Man of the Universe but as there was little competition we either sat there, zoned out, watching with cereal bowls in hand, or maybe actually went outside to play. I’d stay for Lidsville. Just too delightfully weird. I think it begat the likes of Pee Wee’s Playhouse.

Personal highlight, there was a local space themed kiddy show with a young man, Jack Jet, and his ventriloquist dummy that I can’t remember the name of. I drew a picture of an ‘Underground Space Fort’ and somehow it made it’s way to him. I think mom knew his real life aunt or something. What a thrill when he held the picture up on the TV! Later he mailed me a teddy bear dressed like Smoky. I had really hit the big time. Spose that counted toward my 15 minutes of fame?

7 Responses to It All Started with the Test Pattern