Prompted By What We Watched
10 comments.

Television came to our house late in the form of a used 10-inch Motorola with a cabinet as big as the Ritz. Sunday night was family night. Except for dinner, we weren’t big on family rituals but Sunday night was an exception. I’d be called inside to watch “The Ed Sullivan Show” (with varied interest — too many women with little trick dogs, too many guys balancing spinning plates on sticks). 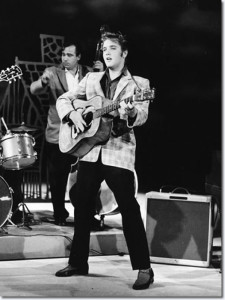 However, I do recall one Sunday summer night when Ed Sullivan booked Elvis Presley for his premier on national television. By that time, I’d become a Top-40 freak, waiting patiently through 45 minutes of dedications to hear Carl Perkins, Fats Domino, and Jerry Lee Lewis really rock it. Elvis’ controversial moves were no more startling than my seventh-grade heartthrob’s audacious attempts to shimmy for the boys from her second-story bedroom.

Many of these guys later collected incognito Oscars for film work, but in 1955 they collaborated to create this witty, farcical morality series about resistance and the abuse of power. “Robin Hood” delivered a tongue-in-cheek drama with men in tights, and the phony-looking Sherwood Forest sets were hilarious.

Every Monday, the kids in my fifth-grade class would gather in the playground before school to recount the previous night’s “Honeymooners” episode. The live, improvised comedy churned out laugh-till-it-hurts one-liners, spats, and pratfalls. Every kid on the playground emulated Art Carney as Ed Norton, the self-styled “sanitation engineer” who worked in the sewers by day and competed by night with Ralph for Fool-of-the Week honors. Spouses Alice and Trixie called the real shots in the Brooklyn tenement with diplomacy, pragmatism and grace.

Next stop? “Mickey Mouse Club” drew me and my pubescent pals to the screen because of its main feature — Mousekateer Annette’s budding breasts. Darlene could really sing. Don’t remember much else about Mickey Mouse.

In high school, if I wasn’t at the recreation club dances, I watched the Friday night morality plays — Rod Serling’s weird and brainy “Twilight Zone,” Mister Dillon, Miss Kitty, and Chester in “Gunsmoke,” and the darker Richard Boone as Paladin in “Have Gun, Will Travel.” Paladin featured few female characters, but back then, who noticed?

“The Many Loves of Dobie Gillis,” left me cold except for Maynard G. Krebs, Dobie’s beatnik sidekick. I couldn’t relate to Dobie. He was as lame as Pat Boone, but Maynard… He was my kinda guy. I looked for the clever side of Maynard’s fool, to no avail. Disney wasn’t into glorifying anything that strayed far beyond the good girl, the cute boy, and three feet out of four on the ground.

After high school, my TV viewing experience went dark. It wasn’t intentional, but television just disappeared out of my life.

Later, I realized that I had stopped watching the tube in Quincy House, after I stood in the middle of my cinderblock living room and watched Jack Ruby kill Lee Harvey Oswald — live on CBS. After watching Dave Garroway point over the Nevada mountains at the flash of a nuclear explosion, after the Cuban missile countdown between Kennedy and Khrushchev, after JFK’s assassination, nothing on live TV surprised me.

In spring semester of my sophomore year, I secured a transfer out of my galoot-dominated dorm suite occupied by a Harvard football player and his equally gigantic toady. I was listening to early Dylan, they were watching the tube and crunching beer cans. I have no idea when anybody studied.

I found shelter, stimulation, and cheer with another Quincy House folksinger and a guy from North Philly named George who took great joy in affirming his Harvard enrollment. “No, baby,” he would say, “not Howard… Harvard!” There was no television in our suite, only guitars, an autoharp, and a phonograph, spinning out jazz, folk music, Appalachian murder ballads, and r&b.

The next summer, I joined an SDS organizing project in South Philly. We lived in a tenement surrounded by a neighborhood where the working-class inhabitants — Polish, Italian, and Black — did not cross to the other side of certain streets. Again, no time for television, but the neighborhood doo woppers were busy on the sidewalks, inventing the Philly sound in the humid summer nights.

After that, I lived off campus on Putnam Avenue with a menagerie of Cambridge fringe fanatics. No television there either. Summers, I migrated to the Bay Area, exploring the Sierras (My cousin was a rock climber… insane.), building gardens, smoking kilos of weed and consuming gallons of Red Mountain rotgut available in  Zinfandel, Chablis, and a horrifying Rosé. 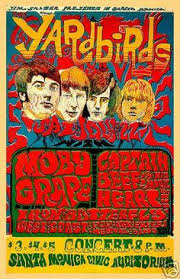 At night, fully loaded, we would cross the Bay Bridge and drop into the Haight to check out the bands — Jefferson Airplane at the Matrix, Big Brother and the Holding Company at the Straight Theater, the Avalon,Quicksilver Messenger Service and the Steve Miller Band, Bo Diddly, Eric Clapton and Cream, and, of course, the John Mayhall Blues Breakers, later to become Fleetwood Mac.

Between the music and the mountains, there was little time for television. But in the Haight or Fillmore, you could see a lineup of knockout rock for a buck and a quarter, dance your ass off, maybe meet somebody, and leave anytime you wanted. What the hell.

After graduation, I jumped into the the revolution with a dogged determination to overthrow the government of the United States thru theater, film, and music. It was a tough job, but somebody hadda do it. Again, no time for prime time.

Fragmented TV recollections from those days evoke images of war, a helicopter tipped over the side of an aircraft carrier, cop-demolished demonstrations, uprisings in the cities. Aside from the visual flashes, television didn’t bring Vietnam into my living room because there was no television and — at times — no living room!

I was already hip to network coverage of Vietnam. Although they later grew fond of congratulating themselves for their wartime reportage, CBS, NBC, and ABC often ignored earnest and urgent dispatches from their front-line journalists in favor of anti-communist demonizing and promoting Gen. Westmorland’s “light-at-the end-of-the-tunnel” mythology. They consistently under-reported antiwar protests, shrinking demo crowd estimates and trivializing demo impacts. The networks also loved to diminish and trivialize the counterculture. Everyone was a hippie or crazed Vietnam vet. Ten years later, the media were still at it. They put a human face on authority with “Hill Street Blues” as if to counteract broad public understanding of how repressive and impersonal law enforcement had been.

When the Movement fragmented and turned dark in the early 1970s, I retreated to a rough little town nestled high Rockies. Wood heat, no running water, no electricity. I’d work with my hands and “get my head together.” My only media experience then was a battery-powered record player and three albums: Carole King’s “Tapestry,” the Stones’ “Brown Sugar,” and The Band’s “Music from Big Pink.” There wasn’t even a television in the café.

Don’t get me wrong — people weren’t avoiding the tube; it just wasn’t happening.

Fast forward to my television reunion. Back in San Francisco, I embraced the medium via my sitcom fanatic, cop-show devotee, writer-actress girlfriend. She offered a brilliant pop-culture prism through which we viewed reruns of “Rockford Files,” “Columbo,” All in the Family,” “Saturday Night Live.” and the perennial “Honeymooners.” The second time around, there was so much to learn.

This world explored in my “resistance fiction series,” published by Harvard Square Editions.

10 Responses to What I watched, what I didn’t…