Prompted By I Swore I'd Never
13 comments. 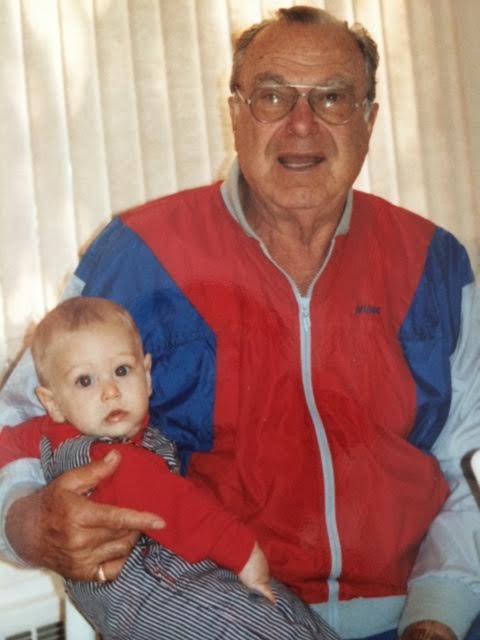 I am going to turn this prompt on its head. Rather than discuss something I saw a parent do that I swore I’d never do, then did, I’d like to give two examples of behaviors from the older generation that I found offensive and I DID NOT do, guided by advise from my father, which I shrugged off when he offered it to me, more than 30 years ago but have found to be great advise, in retrospect.

In the 1960s, in the Reform Jewish movement, girls were not called to the Torah as bat mitvot. Women’s rights came to the movement a few years later. We were Confirmed into our faith in 10th grade and the service, held on the Jewish holiday of Shavouth in early June, was a big deal. Most kids in Sunday School, stayed around for this ritual. Mine took place on June 1, 1968. 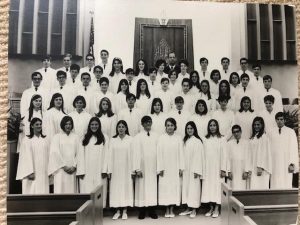 You can see how many of us were in the class. The girls wore white dresses under the white robes. Our rabbi (who, several years later, performed my marriage ceremony, along side my newly ordained brother) is in the back. I’m in the front row, just to the right of center. The holiday celebrates the giving of the 10 Commandments to the Jewish People. Our class wrote our own service. I was a class officer and key author of the service. Family members came in from out of town to be in the congregation to witness the ceremony. It was a joyous occasion. My parents held a big party at our house later in the day.

After the service, we returned to our home to rest and get ready for the evening; a catered party. I undressed in my bedroom to take a nap, as we were hosting this large event. I left my slip out on my bureau, knowing that I would put it on again in about an hour. I saw no reason to put it away. Even with my door closed, my mother entered my room without knocking, saw the slip laying out, became angry, muttered under her breath (but loud enough for me to hear…one of her favorite tactics), “That piece of shit!”, folded it and put it in my drawer, stormed out of my room.

I lay there, quaking with rage. How could she enter the privacy of room, why was she incensed by this one thing, knowing that I would dress again shortly, why did she call me something vile, knowing that I’d hear her?

Shortly thereafter, I got up, got the slip out of the drawer, got dressed and went on with the party. My grandmother was still alive, but just barely. In her name, my aunt gave me a beautiful heart-shaped garnet ring set with a tiny diamond under it, which I proudly showed off that evening. We went on like nothing had happened. That was Mother’s M.O. She blew up, then pretended nothing had happened. Do we look a little tense in the photo below? 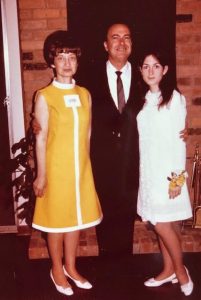 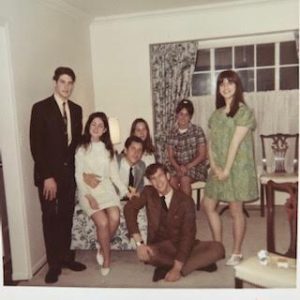 I later spoke with my father about this. He shrugged it off, told me my mother had mental health issues and asked me to forgive her. I couldn’t. I’m not sure I ever did (which is why I did not write about this incident for the “forgiveness” prompt). Don’t get me wrong. I was always a good daughter. When she needed care, I moved her to Boston and took care of her for the final 15 years of her life. I just couldn’t get caught up in her drama. Perhaps I did forgive her on her death bed. I thought calling me that vile name, particularly unprovoked, was unforgivable and I vowed to never do anything like that to any child of mine. I never have.

My father-in-law had a basic shyness about him. He was smart and prided himself on knowing a lot of facts about subjects he’d studied. I first won his approval when Dan and I were dating, about to become engaged and I went to their Newton home for dinner every Sunday night. Sitting to Erv’s left, he asked if I knew the original name of the Royal Ballet (in London). I replied without hesitation, “Sadler Wells”. He was impressed and I passed muster.

He loved babies, but he played with youngsters in a teasing manner or some sort of rough house that didn’t always suit my hyper-sensitive children. They enjoyed his intellectual side; shooting off rockets with him, learning about computers and science and the like, but neither of my kids liked to be teased in any way. 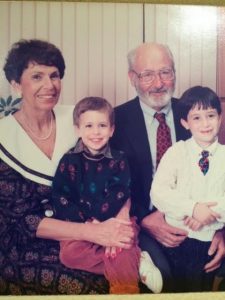 My in-laws with my children

The Pfaus moved away from Newton in 1977, first to New Orleans, then to Hamilton, NY, ultimately retiring to Marco Island, FL. When Jeffrey was 3 1/2 months old and David just turned 4, we visited them in Hamilton over Labor Day weekend. It was a five hour drive for us. Jeffrey barely slept and nursed every hour and a half. I was tired, but we looked forward to being with them. Gladys had been a big help to me when Jeffrey was born and Erv loved the bris.

Friday evening, Gladys decided that Dan, David and I would go into the village (they lived on a hill right outside of town) to see the art opening of a friend, after I’d nursed Jeffrey and put him down. David played with plastic connecting beads, which were hinged. He had them in a circular shape. He sat on a couch between his grandfather and his father. He was very shy and sensitive, cried easily. Erv wanted to engage him, but did so by taking away his toy and playing “keep away”, which made him frantic. He did not enjoy it. Also, the beads came apart. David started to wail. Erv couldn’t understand why David didn’t like this form of play, put the beads back together, but not in the same pattern, now they were “S-shaped”. David wailed harder. Erv was convinced he had put the beads together properly. Gladys wanted to get us all out the door RIGHT THEN, to make it to the gallery on time, so added to the frantic scene.

Dan scolded his father for the way he handled David, which he thought was inappropriate. Erv did not like to be spoken to in this manner, not even by his successful, first-born child. We hustled the fretful child out the door. He calmed down in the car. We spent a little time in the gallery, congratulated Gladys’ friend, came back to the now-quiet house.

We got David ready for bed. We thought we were past the earlier scene. David said good night to his grandfather, who was heading up the stairs and didn’t respond. We didn’t think much of it.

We all assembled for breakfast the next morning, but Erv was sullen and didn’t speak, even when directly spoken to. Slowly it dawned on us that he was taking the posture of an out-of-joint school girl and not speaking to any of us, not even his four-year-old grandson, who was long past yesterday’s incident, really loved his grandfather (he rarely saw my father) and really wanted to engage him. Erv would not engage. He got up and walked away. We were all flabbergasted, including Gladys. We couldn’t believe he could be so petty and immature. But he persisted throughout the day. Dan would have none of this, huddled with me in our bedroom and decided we should pack up and leave.

Gladys was equally as frantic, trying to reason with Erv. He would not budge. She feared if we walked out the door, there was no healing this rift and we would be lost to Erv forever. She negotiated back and forth between father and son throughout the day. I stayed out of it, as I felt the argument was between Erv and Dan and would do whatever Dan decided. We had the car all packed, ready to leave when Erv finally said something small and insignificant to Dan, but it was enough. Dan responded and they were again, on speaking terms.

We sat down to breakfast on Sunday. There was still uncomfortable silence. I asked Erv something about fishing. I don’t care a thing about fishing, I just wanted an icebreaker and it worked. He launched into some long response; more than I could possibly care about. Gladys understood what I had done, pulled Dan aside, “Do you know what a gem you have there?” He probably never will.

Things flowed smoothly after that. A few days after we got home, I spoke with Erv on the phone, trying to explain my bright, sensitive son. “We think he is gifted”.” Come on…he’s not a genius”, was the reply from my father-in-law. “I didn’t say he was Mozart, but he’s very bright. Gifted is technical term.” Erv didn’t live long enough to see that little boy get his undergraduate degree from Stanford  in physics and a PhD in Computational Neuroscience from Columbia. Yes, he’s very bright. Erv has been gone 19 years and ultimately got along well with both my kids.

Shortly after all that episode, I recounted the story to my father, who had moved to Laguna Beach, CA after divorcing my mother, so we didn’t see him often. He was horrified. His response: “Just hug him and tell him you love him.” “Oh Dad, that’s so simplistic.”

Can you feel me rolling my eyes? My father dealt with a lot in his life, from a bipolar mother, institutionalized when he was 12, to the neurosis and ultimate mental breakdown of my own mother. He always tried to look on the bright side of life and keep a positive outlook, and, yes, to love people no matter what, particularly those close to him. He came east to visit for Yom Kippur in Oct, 1989, when the Featured photo was taken. It was the last time I saw him. He died about two months later, alone in a hospital in California.

As my own children became more complex and more difficult to deal with, his words have always come back to me. And I have tried to stay calm, not lose my temper and just love them.

Tags: swear at my child, angry over nothing, ruin a happy day
Characterizations: moving, well written

13 Responses to Just Love Them

Right, then wrong, then almost right
by Marian