Loved the material, loved the students by Marian
100
(149 Stories)

Prompted By An Unforgettable Person
8 comments. 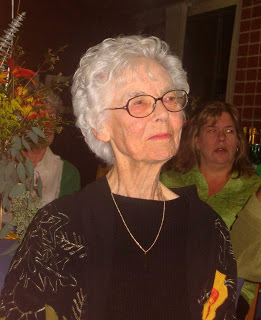 Dr. Roussel Sargent was the first professor I met on my first day at Mills College. I was reasonably sure that I wanted to major in English, so I had signed up for a freshman seminar that she was teaching. I can’t remember what we studied, but I recall being so impressed by Roussel that I identified as an English major from that time on. In contrast to the semester at another school where I’d been, when I had only TAs, it was thrilling to have a full professor and a class of just ten people! And, how inspirational it was that a woman could get a PhD and have an academic career.

Roussel was tall, elegant, very perceptive and demanding, but always kind and encouraging.

Roussel was tall, elegant, very perceptive and demanding, but always kind and encouraging. An English woman with a degree of reserve, she was a perfect complement to the department head, Dr. Elizabeth Pope, a tiny, round woman with a sweet demeanor and a demonstrative personality.

I believe I took at least one course every year from Roussel. English majors had to take a senior seminar, and I took hers on Yeats. That seminar was really challenging, and again, with about ten people in the class, there was nowhere to hide if you weren’t prepared. One of the best learning experiences during that seminar was when Roussel had each of us teach a Yeats poem to the other students. That helped us learn deeply. We also learned to argue our points persuasively with evidence, which helped a few of us in another professor’s Chaucer class, when we refuted what we saw as a flawed interpretation by two male graduate students.

Roussel probably remembered every student, and she always remembered me at reunions and when I came to campus as a volunteer. She was really happy that I could use my writing in my career. The photo above is from her 90th birthday in 2007, and this is how I remember her from my student days, although she really was only in her mid to late 50s at that time.

It wasn’t until Roussel passed away in 2015, at age 97, that I learned some amazing details of her life. Modest by nature, she hadn’t revealed very much to students. After graduating from high school in the UK, she had a job as a bank clerk in London, experiencing the air raids. During World War II she did volunteer work, and afterward went to the University of London, where her academic career began and she received many awards. A chance meeting with a Mills alumna in 1958 led to Roussel coming to Mills for a temporary job. At Mills she stayed, and taught for 27 years.

An open office door was more than a slogan for Roussel, and she was known for never turning a student away. There wasn’t one interaction or incident that makes her unforgettable, just her consistency and encouragement that set me on a path. One of Roussel’s favorite sayings was that great teachers love the material and love their students, and I can’t think of a more fitting description of Roussel Sargent.

8 Responses to Loved the material, loved the students