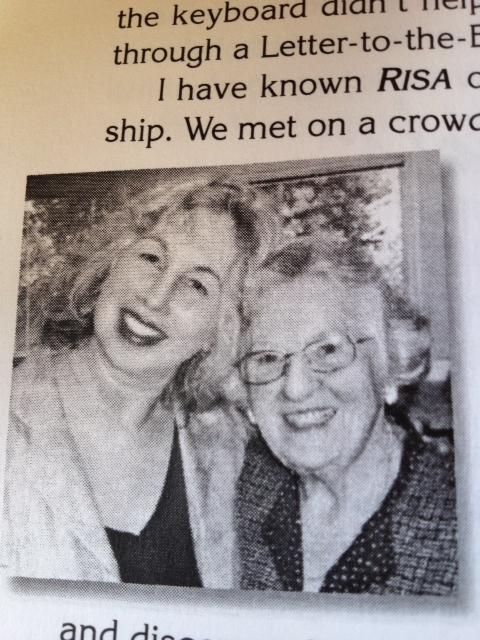 As they say in the movies, we met cute. My husband and I were flying home from a trip to San Diego, sitting across the aisle from each other the way we do. We had flown down south to take his Aunt Bette to lunch to celebrate her 80th birthday.  It’s the only way I can pinpoint when I met Martha—November of 2003.

"It was bashert," she used to say, using the Yiddish word for destiny

The plane was crowded, and the middle seat to my right was taken up by a small, pleasant, gray-haired lady. During the flight I took out several pages of a manuscript I had promised to look at for a friend. The work was dreadful, and I am sure I groaned and sighed as I slashed away at it with a pen.

The lady next to me leaned over and asked, “Is that a manuscript?”

I looked up and answered, “Yes. And it’s terrible.”

I laughed and said no,

“But are you a writer?” she asked.

Well, I fancied myself to be a writer, since at that time I’d had a few things published in the San Francisco Chronicle and other places. “I’m a writer too,” she said. At the time, she was well into her 80s. As we talked, she told me she had grown up in Berkeley, graduated from Berkeley High, and then from Cal around the same time as my father-in-law, in 1941. She had written a couple of books and had a regular column in the Modesto Bee called “Our Turn.” 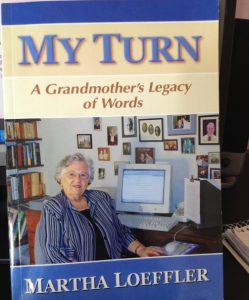 One of Martha’s books

We compared notes on our publications, exchanged emails and business cards and agreed to stay in touch.

And we did. We had a lively correspondence via email over the years. I wrote to her in 2007 about my daughter’s first pregnancy. “You’re much too young to be a grandmother!” she wrote. We shared many joys –both personal and professional–and shared family photos as well. She sent me links to things she thought I would be interested in and I did the same for her.

I also wrote to her about the deaths of my father-in-law and my mother within a few months of each other. I told her about weddings, graduations, births, and other life events that you share with your friends. She wrote back congratulations, condolences, mazel tovs and encouragements, and filled me in on her many travels and visits with family. She did not sit still much, except to write. And she wrote a lot. She began teaching a class to “seniors” on memoir writing, and we exchanged ideas for her students to try. I sent her something I had written, based on a poem, and she immediately borrowed the idea for her class.

She expressed her delight when I returned to grad school for my MFA. She wanted to hear all about it. Along the way, I asked her to contribute to the empty nesters anthology I was working on and she sent in a lovely piece about what it was like when her twin boys went off to college. And I realized when she sent in her bio for the book that she had started her “second career” as a writer in 1985, when she was 65 years old!  She was also delighted when I gave her a copy of the book and showed her what I had written in the acknowledgments:

“My deepest thanks to Martha Loeffler, a wonderful role model–both as a writer and as a human being. I’m so glad we met over a manuscript on a crowded plane.”

We re-told that story many times. Martha even wrote about it in a piece on the unusual ways she had met three special friends. I was one of the three. She ends with, “So here’s a rare salute to crowded airplanes: Thanks for letting me meet Risa!” 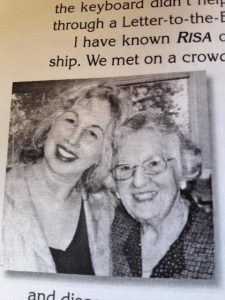 In her second collection of essays from the Bee, she included some advice for a new mom I had asked her to contribute as part of a little book I put together for my daughter’s baby shower. Here’s a picture of me holding my newborn granddaughter accompanying the piece in Martha’s book. 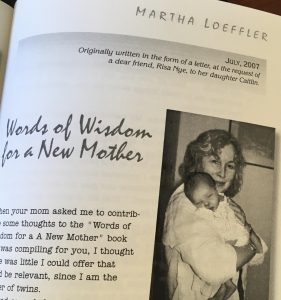 Even though I am the same age as her two sons, Martha and I were more like girlfriends who share a love of family, a good story, and writing. Reading over our old emails, I can feel the love and support she never failed to include. “We write about the same things!” she told me once, when I sent her a piece about my dad. I felt the same way about her writing.

I drove to Modesto to see her number of times. She showed me her home office and took me to lunch. She insisted on driving and paying, every time. Would not hear of my picking up the tab or chauffeuring her around.

Over time, I noticed that our email correspondence had lapsed. I sent her a couple of short “how are you?” notes and did not hear back.  I called her house and got a strange voicemail message.

I tracked down one of her sons and spoke with him. He asked me a few questions (we had never met, and I wasn’t sure he’d recognize my name as a friend of his mom’s) and then he told me that she had begun showing signs of dementia. I mentioned my latest emails, and he told me, sadly, that she was not on her computer anymore. I asked if it was OK to call. He said he thought if I identified myself a few times, she would possibly remember me.

So I did call. It took a while, but after repeating the airplane story, I could hear the old excitement in her voice. “How’s the family?” she asked. And asked again moments later. It was a short conversation, but I wanted to believe we had connected in some way. She sounded like her cheerful self on the phone, if a bit confused.

Martha and I both have November birthdays, one week apart. I always thought of her and what she meant to me at that time of year. One morning around our birthdays in 2013, I started to write again to her son. I was aghast to see that it had been almost a year since we had spoken, since I’d talked to Martha. But before I hit “send” with my gentle inquiry about his mother, I typed her name into a new search box. Martha’s father had lived past 100, after all. Still…

And that is how I learned she had died the year before, in December of 2012.

I called my husband at work in tears. I could barely get out the words to tell him Martha died and I hadn’t known. I felt waves of grief as I remembered that fateful day we met on the plane. It was bashert, she used to say, using the Yiddish word for destiny, that she and I would meet and become friends thanks to a terrible manuscript.

I consider myself lucky to have had dear Martha in my life for as long as I did. I treasure the memory of the years our lives were intertwined through our shared love of family and of writing.

14 Responses to Martha My Dear