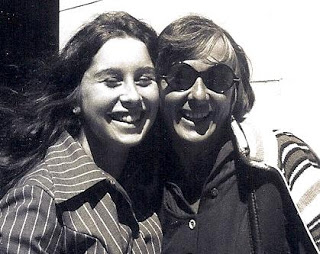 Aunt Ruth used to chide me when I complained about being exhausted after chasing my young children around. “In my day,” she said, “we’d put the kids to bed—and then figure out how to save the world!”

Saving the world meant throwing herself into the fray: she’d hoist a sign, march and demonstrate in the streets—for civil rights, for social justice, against the bomb, against the war, against the next war, and the next. She kept her vast collection of politically inspired buttons pinned to a large piece of felt, ready to stick on her hat or jacket as she headed off to the next rally or picket line: We Shall Overcome. Make Love, Not War.  Another Mother for Peace.

I loved the time we spent together during my summer visits to my aunt and uncle’s crowded apartment in L.A.  During these critical pre-teen years, my aunt matter-of-factly shared some important tips: she showed me how to apply three shades of lipstick, how to shave my legs without nicking divots into my shins, and how to have fun while shopping—things my mother hadn’t taught me.

A constant parade of unemployed writers, between-gig actors, labor organizers, and fellow progressives showed up at the L.A.  apartment, arguing politics over red wine and plates of pasta long into the night. Hugs and handshakes always followed the loud voices and f-bombs at evening’s end. Things were not like that at my house.

When her family moved back home to San Francisco, my aunt began contributing articles and photographs to her neighborhood newspaper, The Potrero View. She subsequently took on the roles of editor and publisher. 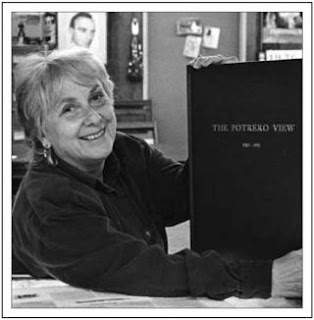 photo courtesy of the Potrero View

]During her three decades at the paper, Ruth was honored for her service to The View, and to the Neighborhood House, a community center where she helped organize after-school programs, classes for adults, and events that celebrated the scrappy diversity of the “nabe.” 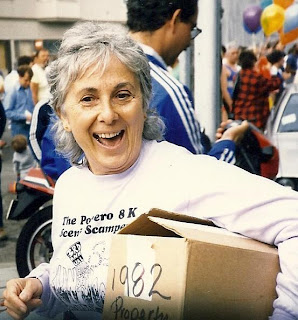 At the Potrero Hill Scamper

At an event honoring my aunt for her work, the mayor read a proclamation loaded with “whereases,” and declared a day in her honor. When he finished speaking, my father leaned toward me and pointed proudly at his “baby” sister. “Look at her—she’s the richest person in this room.”  And I knew what he meant.

My aunt encouraged me to write when I first got started, and published some of my essays in her paper—my first bylines. Writing was her passion. She talked about writing a memoir, but never started it. “I’m not a writer like you,” she told me once. “You do it for both of us.” 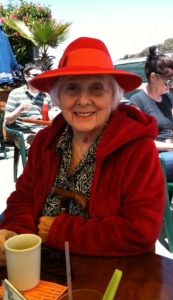 Ruth never pandered to anyone: you could always count on her to be outspoken, feisty, honest but kind, and a champion of the underdog. She would confront racism or social injustice wherever she found it, no matter who the guilty party might be. And she mastered the art of being cool without even trying. 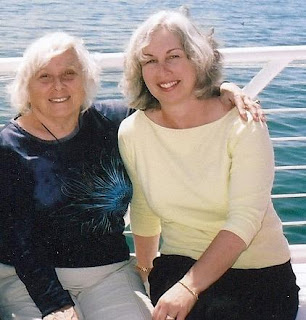 When I went back to graduate school at age 58, I hoped I could model myself after Ruth. She was always able to engage effortlessly with everyone: young and old, well-off and well-connected,  or down-on-their luck.

I often asked myself: what would Ruth do? And I knew that she would act like it was no big deal to be sitting in workshop with students a few decades younger. I could imagine her saying, “Get over yourself and do the work you came to do.”

Now over 90, Ruth has slipped into the foggy world of dementia.It’s not the world she tried to save so many years ago, but that’s the world she lives in now. The sparkle is still in her eyes. At least, that’s what I want to see. And I tell myself she may not recognize me anymore, but she still  knows I’m someone who has always loved her.

2 Responses to My Aunt Ruth