If I strain my brain I can picture flat tires, failing brakes, an air filter installed backwards, lost keys, check engine warnings, rear enders, side swipes, road rage, blizzard conditions, the wings of my mother’s 1957 Plymouth, the magic powder that stopped my Olds’ radiator leak, the stink of my diesel Benz, my ’66 Mustang midnight blue convertible (correct, it wasn’t all relentlessly bad and sad), and assorted other automotive anecdotes from my dimming past.  But the following is fresh in my mind, and its engine is still running:

Maybe I should have subpoenaed my grandchildren as character witnesses?

I thought I could avoid the trouble of parallel parking by going front end first into the space and then, as I approached the curb, spinning my steering wheel hard left so as to swivel my chassis rightward, and hit my spot like a figure skater completing her double lutz.  A very elegant conception with, as it turns out, an unanticipated degree of difficulty.

As I effectuated my swivel I misjudged, by no more than an inch, the leeway between my right rear flank and the protruding front bumper of the parked Audi sedan which I was seeking to park in front of.  The vehicles kissed—a slight graze of my flank against the Audi’s protruding front bumper—which the Audi could claim with some credibility was a non-consensual kiss, as the Audi was just parked there minding its own business, notwithstanding a more cynical view that the protruding bumper was looking for it.  The kiss was audible (pardon the near pun) for a nanosecond of grinding plastic on plastic (since my vehicle was also an Audi, I could call it a nanosecond of grinding Audi on Audi).

I got out to inspect the damage, if any.  There appeared to be some white dust, residue of stressed (caressed) plastic on the Audi (the victim Audi) bumper and its surrounding cheeks, evidencing the area of the kiss like a lip stick smear. With my moistened thumb I wiped away much of the white dust.  For a moment I thought I had dodged an expensive bullet.

I planned to leave a note of explanation on the victim Audi windshield, apologizing for the nearly undetectable episode, adding a “…but call me if you are so inclined.”  As I looked for a pen in my glove compartment, the victim Audi owner appeared.  Gracious to a fault, I leapt up to greet her, doffed my hat as it were, and advised her of the good news that no harm was done. “You see”, I said, “the while dust disappears with the rub of my moist thumb…”

She was not so elated as I.  She thanked me for sticking around—“…a lot of folks would just hit and run…” she said with a wan smile—and proceeded to eyeball her bumper and surrounding cheeks for a long and thorough while.  “Let’s exchange contact information,” she said.  “I’ll show it to my garage guy. I think you’re probably right, that it’s no big thing, but…”

It turned out that she came up with a garage guy repair estimate of $1,200, which I thought was ridiculous.  I offered her cash of $700, which was about $675 more than I valued the damage, if any.  I wanted to avoid the uncertainty, and possible premium increase, of insurance company involvement.  But she rejected my offer, driving me into the institutional arms of my insurance company.  “Fine”, I said to myself.  “I bet she’ll regret not grabbing the $700.”

I was wrong about that.  Through the wizardry of modern accident inspection and appraisal services, my insurance company paid out $4,000.  I said, “What?”

I appealed for re-consideration, but the payout was affirmed.  I was told an expensive little bumper grommet was damaged, and needed to be replaced, plus labor.

Then I lost my next appeal.

I’d been ticketed for speeding on Route 6A en route to Wellfleet, in December 2020, at the height of pandemic panic.  Pre-vaccine.  I was driving to see my daughter and her family (two kids, one dog, one lizard, one husband) who were sheltering out the pandemic in her husband’s family’s Cape home.  I hadn’t seen them in close to a year.  I was eager to arrive.  I was bringing many gifts.  I was traveling briskly, but I deny culpability for speeding.  I recall being in a line of traffic.

I appealed the ticket.  I was given a zoom hearing before a magistrate a few months later.  I told my story, emphasizing my excellent driving record, and the difficulty the police officer may have had in accurately estimating my speed while traveling past me in the opposite direction, and that in any event I was in a line of traffic.  The wise magistrate ruled that if I incurred “no new incidents” on my driving record in the next 6 months, the ticket (including the significant fine attached thereto) would be dismissed.  I thanked her.

I assumed that “no new incidents” meant no new speeding tickets, or the like.  Wouldn’t you?  But to my surprise, the Audi kiss and subsequent pay-out was deemed by the authorities to constitute a “new incident.”  My ticket and its fine were automatically re-instated.

I appealed the injustice of the re-instatement and of the underlying ticket to the judge.  I lost.  I paid the fine, increased by the cost charged for taking the appeal.  I await to see the effect of the ticket and kiss incidents on my insurance premium.  And I grouse.  I’ve convinced myself that there was a win hidden in this material, and I rue that I didn’t find it.  Maybe I should have been more humble and apologetic?  Maybe I should have more forcefully interrogated the police officer?  Maybe I should have prepared a compelling graphic?  Maybe I should have subpoenaed my grandchildren as character witnesses?  Maybe I should have dressed down, and not worn the lawyer costume (white shirt, striped tie, dark suit)?  Maybe this and maybe that.  I feel like I am Bill Murray trying over and over to catch the elusive heart of Andi MacDowell. 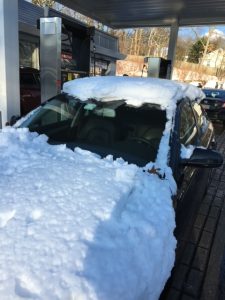 10 Responses to My Driving Record (Updated)