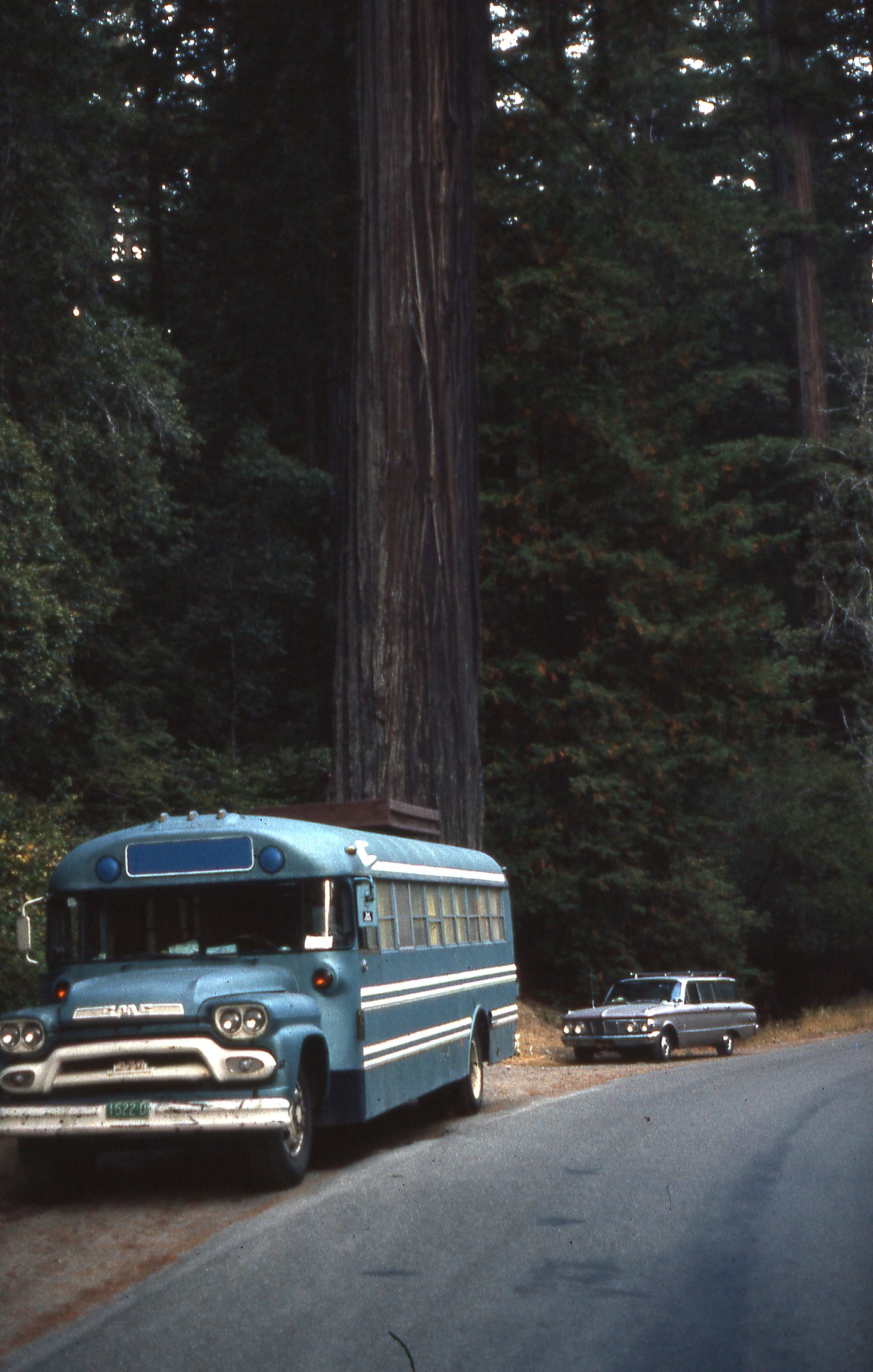 June, 1973. We’d been on the road since May,1970. Granted, we spent much of our gypsy trucker days in a small mountain town in Colorado, on a farm in Maryland, and at another farm in the Berkshires where we lived communally with a pack of former SDS politico pals who had fled the city for cows, apples, and hardwood cabinet making.

I smelled the rubbery stink of an overheated engine.

Still, it wasn’t home, and we wanted to return to San Francisco. I hadn’t yet gotten theater out of my blood, and we wanted to get the kids back in decent public schools where they could stay put through their middle- and high school years.

We’d been traveling much of the time in a beautifully decked out ’56 Chevy pickup with utility boxes on the bed and a nicely crafted redwood camper on the back. But we had a crew with us for the cross-country voyage, and we weren’t sure where we would land.

A friend who ran the local food coop had outfitted a school bus with a galley kitchen, bathroom and shower, and lots of bunks in cubbys to accommodate us, the kids, and our newly adopted fellow travelers. It wasn’t nearly as pretty as the redwood camper, but it was large and well-purposed, and the GMC had a strong engine and good tires. What more did a body need?

We headed west in a roundabout way, first traveling south to Tennessee and the Smokey Mountains where we performed a few times in local fiddlers’ conventions. My favorite part of those conventions was the warmup tent, pitched behind the stage, where a cacophony of stringed instruments twanged and wailed, everyone tuning to everybody else’s intonation until middle ‘C’ had probably become ‘D.’

Then we started out in earnest for the West Coast. Traveling through the South in those days tended to inspire paranoia in people who looked like us and traveled in hipster-tricked-out gypsy wagons. Our GMC bus seemed innocuous, almost conservative, in relation to some of the glorious gypsy truckers we had run with in our travels, but nonetheless, we very much felt like an island unto ourselves, rolling along the Interstate at a steady 50 mph.

Halfway across Arkansas, all was well. The engine hummed, the tires sang, the kids were goofing around the kitchen table.

When you’re operating a big vehicle that has a few years on it, you tend to drop your eyes regularly to the gauges measuring engine temperature and oil pressure. I rolled along the broad highway, periodically glancing down with satisfaction. Both gauges stood at attention. These were the days of truckers’ convoys, and as we rolled along, the first of a succession of 18 wheelers roared past on the left. 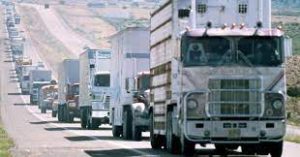 These convoys gathered momentum as more truckers joined the caravan. They were in constant radio contact with each other and clearly, someone had called in the freak show with the hippie chicks in the blue bus. The truckers had decided to conduct their own freak show, each semi pulling up close behind us, then darting out into the passing lane, blasting their air horns and roaring past us, taillights blinking. Some of you may remember those guys.

I got me ten forward gears and a sweet Georgia overdrive.
I’m taking little white pills and my eyes are open wide.
I just passed a Jimmy (GMC) and a White (primo truck manufacturer),
I been passing everything in sight,
Six days on the road and I’m gonna make it home tonight.*

The convoy took nearly an hour to pass us. The huge, segmented organism seemed friendly enough, but it was intimidating to have one massive vehicle after another roar by, leaving us to rock in the maelstrom of their slipstream.

When the final truck pulled past us and disappeared into the distance ahead, the bus ticked along, quiet by comparison. I glanced down at the gauges and my heart seized. The temperature needle had snuck from its normal straight up-and-down position to a crazy tilt to the right. I smelled the unmistakable hot rubbery stink of an overheated engine.

Hypnotized by the passing convoy, I’d stopped checking the gauges. I pulled into a woodsy rest stop. Everybody craned their necks from various sleepy perches as I shoved open the bus door and clambered down.

Steam rose from around the edges of the hood. What had I done? Or what happened? Doni, one of our pilgrims — he’d left the commune in Massachusetts to throw in his fortunes with us and remains a good friend to this day — climbed down to join me.

I raised the hood. The entire front of the engine was painted with a spattered mural of rusty radiator water.

I checked. “Nope. Radiator hoses are all fine.”

I crawled under the front and there — gaping at me from behind the rust-splattered fan — a hole the size of a tennis ball opened into the cooling system. A major artery had burst and a plug, placed there in case the water in the engine block froze, had popped out. If the water in the engine block froze, the ice would crack the block. The freeze plug served as a safety valve. It had popped out and — instead of releasing the pressure on the block from expanding coolant ice — the cavity had pushed all our coolant out the front of the engine block. The fan implemented the rust-spattered mural effect.

I knew I’d have to hitch back to the town we’d cruised past, a well-worn but well-kempt farm town. The car dealer had bright green John Deere combines for sale next to the Ford pickups. 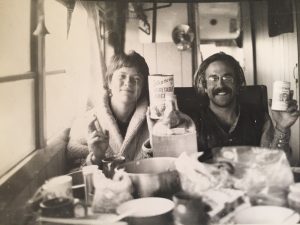 Who knows where the freeze plug had popped out? I’d have to go into that town looking like this. I was wearing jeans, a blue jean shirt, a leather vest shiny with use and my hair would have served well as the roof of a small but sturdy hut.

Arkansas. Who would be running the auto parts store? Had to be one in a town like that. Was I about to run across a town full of Arkies like the Okie from Muskogee? How many of them?

After receiving a bracing benediction from the school bus crew, I tucked my hair under my hat and crossed the grass of the Interstate.

The auto parts store looked like any auto parts store in America except for the herd of tractors that had been tethered in the parking lot next to the pickups. I took a deep breath and walked inside.

The counter sported the usual suspects: heavy-lidded clerks in blue company shirts facing booted, blue-jeaned, straw-hatted fellas with the familiar array of back-pocket billfolds on chains and butt cracks on display. The crowd turned to survey me.

I bellied up to the counter, eyes following, ears open. “I need a freeze plug for a Jimmy 426 inline six,” I growled in my best guttural.

“Freeze plug? What…Cold where you been?” some wag whinnied.

“They tend to do that around here,” somebody brayed. Laughter.

“Convoy passed us up,” I drawled. “Convoy was so damned long and they was movin’ so fast, they froze us out.”

That brought a few guffaws and agreeable nods. “Them truckers’ll do that to ya,” somebody added. “Ev’ry time.”

The clerk returned with the freeze plug, a small, stamped-metal circle that had brought our ramble to a steaming halt. “Need gasket cement with that?” he asked.

“Make sure he brung you the right plug,” a farmer said. “Right, Lennie?”

“If it’s the right plug, won’t need no gasket cement,” I said. “If it’s the wrong plug, won’t matter neither,” I philosophized in my best country mode. Two years in the Colorado Rockies had given me a solid background in country jargon and mountain fatalism.

“Attaboy” a farmer said. “All you need is a hammer.”

I stopped. Almost made it I thought.

“Where you broke down at?” 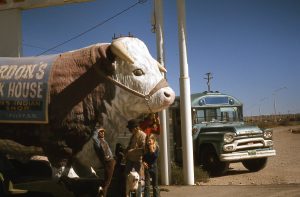 Should I tell them? I thought. Did I want a bunch of yahoos showing up at the rest stop full of booze, jingoism, and curiosity? What the hell, I decided. Give ‘em the benefit of the doubt.

“Up on the Interstate, a little further west.”

“Hell man, that’s a ways. You’re gonna want to get that freeze plug in before nightfall.”

He grabbed the carburetor Lenny brought him and ushered me out to a chorus of “goodbyes.” We climbed into a big Ford pickup festooned with off-road field lights. The cowboy bounced us out of town and onto the Interstate. “Where you headed?”

“Hey, man. Nobody who was really against the war spit at any G.I. We all knew about the draft.”

“Yeah, well,” the cowboy said. “We heard all these stories…”

“Whatever.” He pulled up behind the bus. “Nice rig,” he said.

“Thanks,” I said, and climbed out. “Really appreciate the ride.”

“Glad to help out,” he said through the open window. The pickup roared off playing a new Eagles tune.**

I’m runnin’ down the road

Tryin’ to loosen my load…

I watched the pickup accelerate onto the Interstate bound for some place he called home. I turned back to the bus and its open hood. The freeze plug fit perfectly.

13 Responses to The Great Arkansas Freeze Plug Blow Out