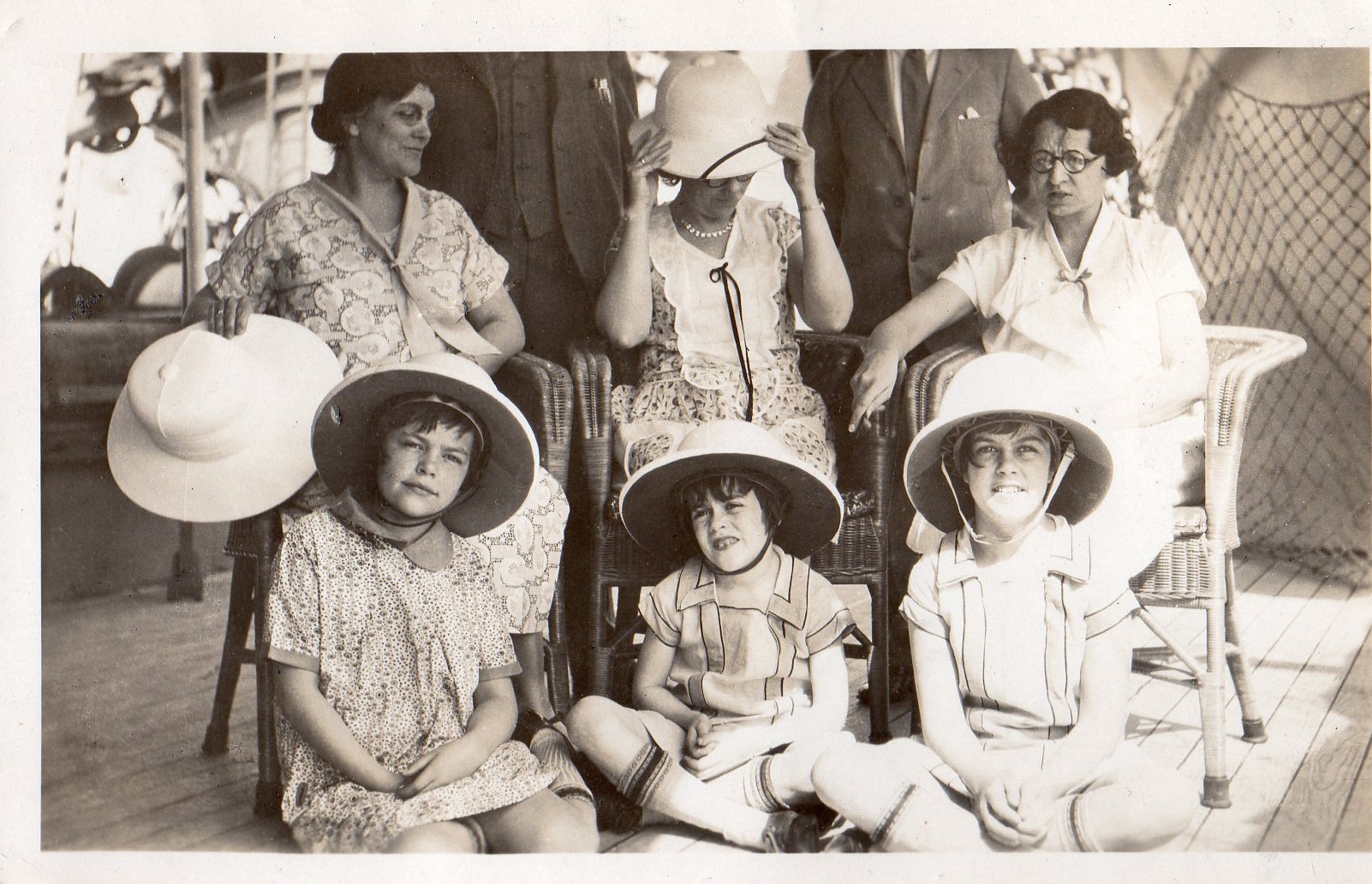 I don’t know how old I was when I first developed an interest in my parents’ early photographs. I might’ve been 7, maybe younger. Inquisitive by nature, an asker of questions even then, I was fascinated by family lore — and in those photo albums discovered a gold mine of images and stories to stoke my curiosity. 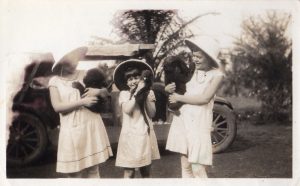 I can’t say exactly why I’m so drawn to family history and the mysterious links that cross generations and inform who we are. But it’s something I’ve always had.

There was Bushman, the baby gorilla that my mother and her sisters kept as a pet at their home in Cameroun, West Africa; Minkie, their pet monkey with amber eyes and a 27-inch-long tail; my aunts Arta Grace and Elizabeth standing by a papaya tree, the photo retouched with my grandmother’s delicate watercolors; crossings to Africa on German freight steamers, stopping at every port and wearing mandatory pith helmets on board once they approached the Equator.

These photos were my first exposure to my missionary grandparents, Fred and Roberta Hope, both of whom died before I was born: Fred a robust, hale-fellow-well-met Midwesterner with warm eyes and a big round belly; and Roberta, a staid, modest lady who never smiled in photographs and whose decision to join the Africa missionary field seems at odds with her extreme reserve. 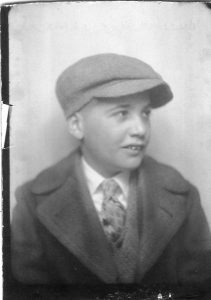 And the Guthmanns: my father as a chubby toddler, as a bucktoothed 13-year-old with a glint of mischief and later as an American soldier in the Philippines, gleefully (or recklessly?) mounted on a water buffalo for the sake of a photo. I see the grandfather who died when I was 2, so stern and forbidding that I only remember being afraid of him; my grandma Sadie, who I knew as very old and nearly deaf, surprisingly young and girlish in early snapshots.

I can’t say exactly why I’m so drawn to family history and the mysterious links that cross generations and inform who we are and how we experience the world. But it’s something I’ve always had. Today, in my sixties, that urge is stronger than ever – in part, I’m sure, because I don’t have children of my own. I cherish these photographs and realize how profoundly lucky I am to have them. 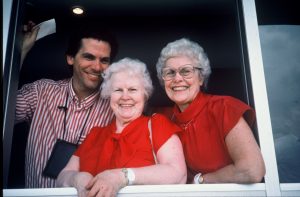 In Cameroun with my aunts Esther and Winifred, 1989.

Family history is huge to me. Twenty five years ago I made “Return to Cameroun,” a one-hour documentary about my grandparents’ lives in Africa, and interviewed my Mom and four aunts about their childhood in the tropics. Family photos were a large element in that film, as well as vintage 8mm missionary films I found at the Presbyterian Historical Archives in Philadelphia; footage I shot during a trip to Cameroun in 1989; and the voices of actors Gena Rowlands and Pat Hingle, reading from letters my grandparents sent home from Africa.

When my mother’s earliest photo album started to fall apart, the pages frayed and crumbling, I decided to remount the photos in a new book. At first I thought I’d simply reproduce the original album, but the more I studied the photos the more I wanted to tell the stories behind them. I interviewed my mother and aunts again, asking them to identify the people, places and back story in each photograph, and with their help was able to place the photos in the rich context in which they were taken. 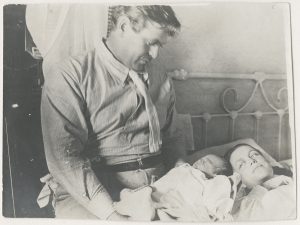 My maternal grandparents Fred and Roberta Hope with their firstborn, Arta Grace. Cameroun, 1912.

Creating a new album was tricky. Many photos had been glued to the page – roughly seventy years before — and I realized I couldn’t remove them without damaging the photos. A friend recommended Karen Zukor, a photo conservator in Oakland, who meticulously removed the photos by peeling the old album paper off the back of each photo and slowly scraping off the adhesive. She also cleaned each photo using soft, non-abrasive erasers and damp cotton swabs, and flattened them between polyester sheets, blotters and weights. In a few cases where photos had faded or flaked, Berkeley artist Gary Bogus carefully retouched the images with fine-point pens.

Irene Imfeld, a book designer and longtime friend, designed and printed all the pages for the photo album, arranging captions and text so that photos could be mounted in the blank spaces. Karen Zukor then mounted the restored photos, using a hinging technique. Bookbinder John DeMerritt created a binding for the finished book and, since the final product was so valuable to me, also created a large box in which to store the book. 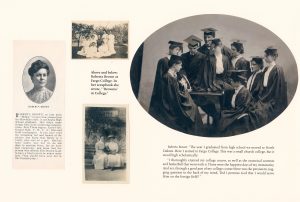 A page from the family album I created, with the help of several gifted artists.

I completed the memory book in 2003, dedicated it to my mother and presented it to her as a Christmas gift. She passed away in 2006, and when my father died two years later and my brother and I cleaned out their home, I discovered a box of loose photos on a closet shelf. They were mostly photos of my grandmother as a college student in North Dakota and as a schoolteacher and fledgling missionary. The book expanded by another six or seven pages, and in 2018 grew again when I received new information on my great-grandfather William Alexander Hope, a Civil War veteran. It’s now 104 pages long, each page 11” by 17”. 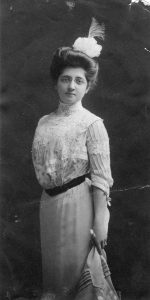 My grandmother Sadie Kaufmann Guthmann. On her wedding day, 1902.

It was a tremendous amount of work, a true labor of love. More recently, I created a similar memory book with photos from my father’s childhood – only this time I did it digitally using Shutterfly. It’s a fairly simple process: you upload your photos and format the pages however you like; crop or enlarge photos; combine images with captions and text; and choose typefaces and background colors or decorative embellishments.

In the late 1980s I videotaped interviews with my dad, his brother and sister, and I used highlights from those conversations to complement the photos. I took a class to get familiar with Shutterfly and although I was slow at first, I loved it once I got the hang of it. By enlarging the photos, some of them 100 years or older, I discovered details in my father’s and grandparents’ faces — tenderness, vulnerability, apprehension — that I’d never seen before. When I found a quote from my dad Marv, my Aunt Rosalyn or Uncle Dave that corresponded perfectly with a photo, I was thrilled.

I’m so glad I interviewed my parents at length several years ago, and grateful for the legacy of their photos and stories. One of the greatest benefits of creating the two albums was sharing them with my brother and nephew, cousins and aunts and uncles. On both sides of my family, I’m regarded as “the family historian” and occasionally I receive notes of thanks. One more priceless gift.

4 Responses to My Parents’ Childhood Photos: A Very Rich Legacy

A Grand, if not Royal, Wedding Portrait
by Betsy Pfau