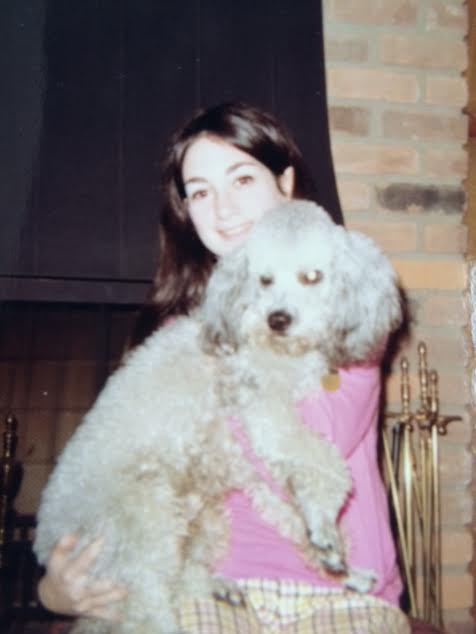 My father and I were crazy about dogs. My mother was terrified of them. All my lobbying fell on deaf ears for years. Finally, my brother was off to college and I was a lonely 14 year old.

Evidently, my mother had had an interesting discussion with an aunt while I was at school one day in 1966. At the time, Aunt Roz and Uncle Roy, one of my dad’s numerous brothers, had a pure-bred miniature French poodle named Jacques. Their older son, my cousin Steve, was an optician with a client who wanted, but couldn’t afford, contact lenses. She had a female poodle named Penny. They decided to breed the dogs and with the money made selling the puppies, the client could afford the lenses and Steve got pick of the litter. The puppies had been born, there were five in the litter, and were evidently very cute. “Don’t tell Kenny or Betsy”, my aunt warned. “You know they’ll want one”.

My mother never could keep a secret. She blurted out the whole conversation as soon as I arrived home and Saturday we were looking at the puppies. There was only female in the litter, Steve had picked her. I picked a precocious male. We lived in Huntington Woods, this was a French poodle and there were five in the litter. I was only in first year French class and didn’t yet know the French word for “woods”, so we named him “Nicole de Foret”, or Nickel (because his mother was “Penny” and he was one of five) of the “forest”, but I meant woods, I just didn’t know how to say it in French. That was his American Kennel Club name, but we called him Nicky and he was adorable. His puppy fur was black with silver peaking through. We never gave him a fancy poodle cut; always left his fur in a puppy cut, as the silver took over from the black.

My mother was still fearful, so my dad took Nicky to his car dealership one day a week, to give my mother a day off (she wasn’t good with human babies either). Poodles are known to be smart and Nicky certainly was, though as a puppy, he teethed on the corners of our kitchen cabinets. But he understood that he was not allowed on any carpeted areas in the house, nor could he come upstairs. If we were all upstairs, he stood at the foot of the steps and keened, but never disobeyed. I was SO happy to have him, but he was my father’s salvation, the only creature who loved him unconditionally and was always happy to see him when he came home at night.

If my father and I had something important to talk about, we took Nicky for a walk. When my father wanted to escape from the house, he’d walk Nicky to his best friend’s, who lived around the corner. Eventually, Nicky’s retinas atrophied and he went blind, which happens in pure-bred poodles. He did alright navigating our home, as long as nothing was moved. I got a frantic call from my mother once. She had left the basement door open. He walked into it and tumbled down the stairs. My dad bought a condo in California and they began spending a month there. It was difficult, but Nicky had to be put down before they went away, as he couldn’t survive outside our home in Huntington Woods.

I missed seeing Nicky on the rare occasions when I returned home, but it broke my father’s heart.