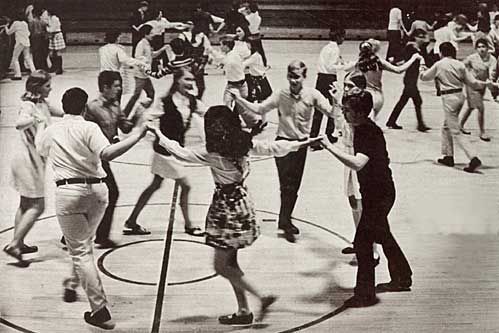 My first day at Arcadia High School was a hot November day, just after Thanksgiving and a few days after my parents and I had moved to Phoenix, AZ from Europe. The first two hours my mom and I sat in the office of Mr. Pentecost, a gentle guidance counselor who exhibited infinite patience with my halting English skills as he helped me decide what classes to enroll in for the last few weeks of the semester. Then I spent the next three periods (English, Algebra, World History) writing down all the English words I didn’t understand so I could look them up after school in my German-English dictionary. So I was excited for what awaited me after lunch: P.E. Finally a class where English would not be required! I could run. I could jump. I could play basketball (I thought). I could learn gymnastics, or whatever one does in an indoor gymnasium in America. None of it required talking!

P.E. does not provide the expected relief on the first day of school in a foreign country.

I was running late, probably because I struggled too long with the infernal combination lock on my locker, yet another unfamiliar obstacle that would terrorize me in those early days (oh how many times I had to ask a strange student passing by to help me open it after several unsuccessful attempts, as I always forgot whether to turn the dial three times to the right and two times to the left, or vice versa). In the empty locker room, I quickly changed into my shorts and tank top, then rushed through the hallway to get to the gym. As I opened the doors to the gym, a bizarre scene unveiled itself to me. The other kids were grouped in circles of eight, holding hands and stomping their feet to the rhythm of a fast-talking man who stood on a small wooden platform and sported a 10-gallon hat. The boom box on the table next to him blared violin- and banjo-twanged country melodies. Why this ‘sport’ is called ‘square dancing’ when everyone stands in a circle was just one of many English language mysteries that flummoxed me in those early days, but nothing confused me more than the auctioneer-like patter emanating from the instructor. I understood exactly zero words and thus was forced to follow the lead of those whose sweaty hands I held. That, of course, meant that I was always a fraction of a second off and thus I ruined the harmony of every circle I joined. Apologetic, yet unable to do anything about my lack of understanding and rhythm, I endured the class until the end. Then I skipped the remaining two weeks of PE until the semester was over and winter break began. Clearly relieved that he didn’t have to deal with the foreigner disrupting his square dancing class, my teacher never mentioned or recorded my absences and I passed with a C.

3 Responses to Nightmares of P.E. Class