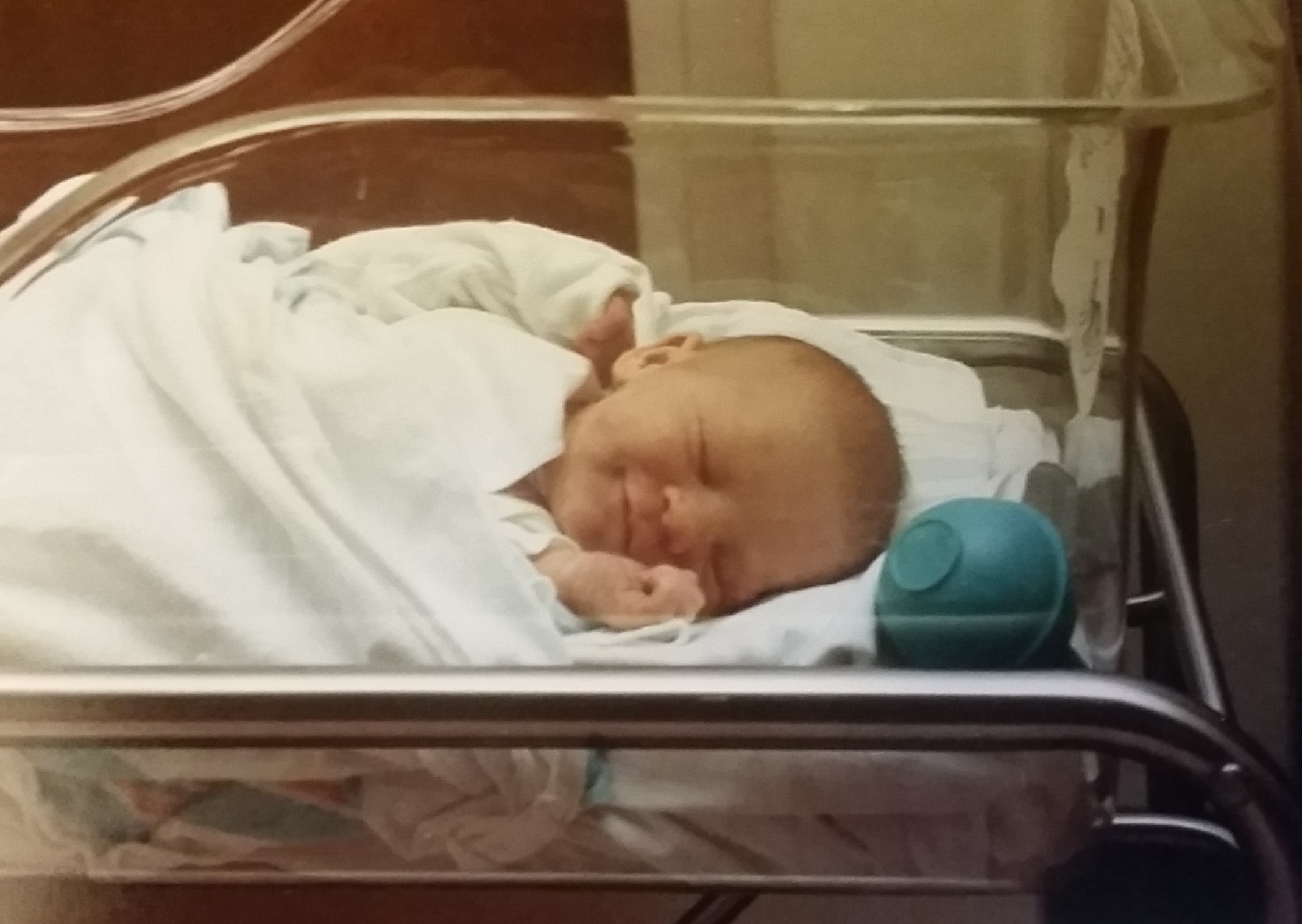 All my babies looked like this, I can only tell which one it is by lookng at the date on the photo.

In my early twenties I had absolutely no interest in babies. I didn’t find them cute, or interesting, or cuddly. When friends or classmates were showing off their babies, I would of course say Oh your baby is so adorable, but I actually thought they were ugly and noisy and smelly. I certainly didn’t want to have one of my own.

Then in 1977 my sister had a baby. I was still not all that excited, until I went to visit. When I saw my little niece, by then about four months old, for the first time, I had such an overwhelming feeling of love, like nothing I had ever felt before. This baby was so beautiful, and I was ready to do anything for her.

So at age 26, I decided that having a baby was an appealing idea, assuming I could find the right person to do it with. That was an obstacle for quite a while. I had women friends who went the sperm bank route, or the get-pregnant-on-purpose-and-don’t-tell-the-guy route, but I didn’t think I wanted to do it that way. When I was 29, I met someone who wanted children too, and two years later we got married, and two years after that (and after one miscarriage), we had a baby.

She was two weeks late to be born, and had grown very large — 9 pounds, 8 1/2 ounces, as it turned out. I was in labor for many, many hours, and they kept lying to me, saying the baby was coming, just a few more contractions. . . . Finally the doctor said the baby isn’t coming out, and I recommend having a Cesarian, but I know this is a big decision so I will give you some time to think about it. As he started to walk out, I grabbed my husband’s arm and said Don’t let him leave. Let’s do it RIGHT NOW! So they gave me something that made my midsection completely numb, and that was the most wonderful feeling (or lack of feeling) I think I have ever experienced! 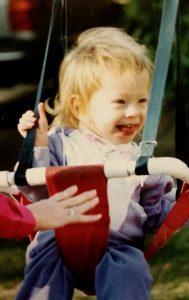 Sabrina was a joy. I was so in love with her from the moment she was born. Everything was new with her, and I was fascinated by each milestone she reached. She started talking early, and had such interesting things to say. She had a puzzle of the United States, and she learned the name and shape of each state. She seemed like a baby genius! I nursed her until she was three years old, when she lost interest and weaned herself. I was pregnant again by then, and apparently pregnancy makes the milk taste different. Here she is, in a swing at a neighbor’s house, just shy of two years old. 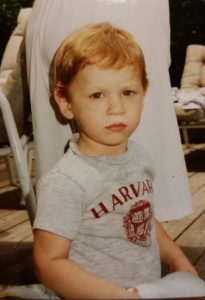 I wondered if I could love a second child as much as I loved her. It seemed impossible. And yet when Ben was born, I felt that same overwhelming sense of love and connection as I had with Sabrina. He was a scheduled Cesarian, so we just showed up at the hospital at the appointed time with a suitcase, like checking into a hotel. Easy peasy. He was a little more challenging than Sabrina, but that was due, at least in part, to there being two of them, both wanting attention at the same time. I nursed him until the age of three also, but the third year was a little problematic, because my husband and I split up a couple of months after his second birthday, and then he was spending weekends with his father. Here he is, also just shy of two, wearing the t-shirt of his future alma mater.

I had my third child, Molly, when the other two were eleven and eight. I had to be talked into having another one, because I was already over forty and much less energetic than I had been in my thirties. Also, it turns out that it’s much harder to get pregnant in your forties, probably because nature thinks you are supposed to be done with that sort of thing by then. I went through fertility treatments, but only ended up getting pregnant after I had stopped the treatments and given up trying. Ironic. She was also a scheduled Cesarian, so off to the hospital with my little suitcase, someone else took the kids to school where they proudly told their teachers that their mother was having a baby that day. When school was over, they came to the hospital to see Molly and me, and we have Polaroid pictures of each of them holding her. They thought she was the best new toy we could have gotten them! Here she is at eighteen months.

Each child has been a joy and a challenge, in wholly different ways. I kept thinking that I was learning from my mistakes, and that I was getting wiser with experience. Turns out that what works with one child will almost certainly not be right with another. They have grown up into three such different people, it’s hard to believe that they are products of (mostly) the same heredity and environment. They are all wonderful, and I am very glad I had them. I cannot imagine my life without them, so I am thankful that my sister’s baby convinced me all those years ago that having children was something I wanted to do.