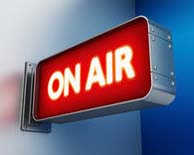 I was sitting in the reception area of the TV studio when she walked in carrying a house plant in each hand. At least that’s how I remember it. Short red hair and a cute, crooked smile. One of the production staff introduced her to me. Andrea. Accent on the “drey,” which was also her nickname.

“And so when WE get married, blah blah blah…"

It was 1984 and this was the brand new De Anza College TV production facility. Andrea was one of the producers of an investigative news show called “Valley Focus.” I was the new camera man. We were all volunteers, and this was going to be fun.

I learned quickly that her current boyfriend was the show’s director. I also learned how smart, articulate, and politically aware she was. Not to mention fun and sexy and handy with a smart retort if you teased her. When armed with her coffee and cigarette, she was someone not to be trifled with.

When we contemplated what local news stories to cover, she always had an opinion – and she had done her homework. She was warm, gregarious, witty, and filled with personal integrity and purpose. It was as if she wanted herself, and all of us, and the world to get better at what it did.

So, one day when one of our colleagues mentioned that she had broken up with her boyfriend, I quickly asked her out. We went to see “Romancing the Stone,” and that was that. I was certain -as if it were just a simple fact of nature- that this was the one. At some point in the middle of some conversation about the future, I casually said, “And so when WE get married, blah blah blah…”

And so, we did. Thirty-two years and two amazing children later, my original certainty about us is proven every day.

One Response to “Ready Camera One”