Rocky on the Second Ballot by John Zussman
50
(86 Stories) 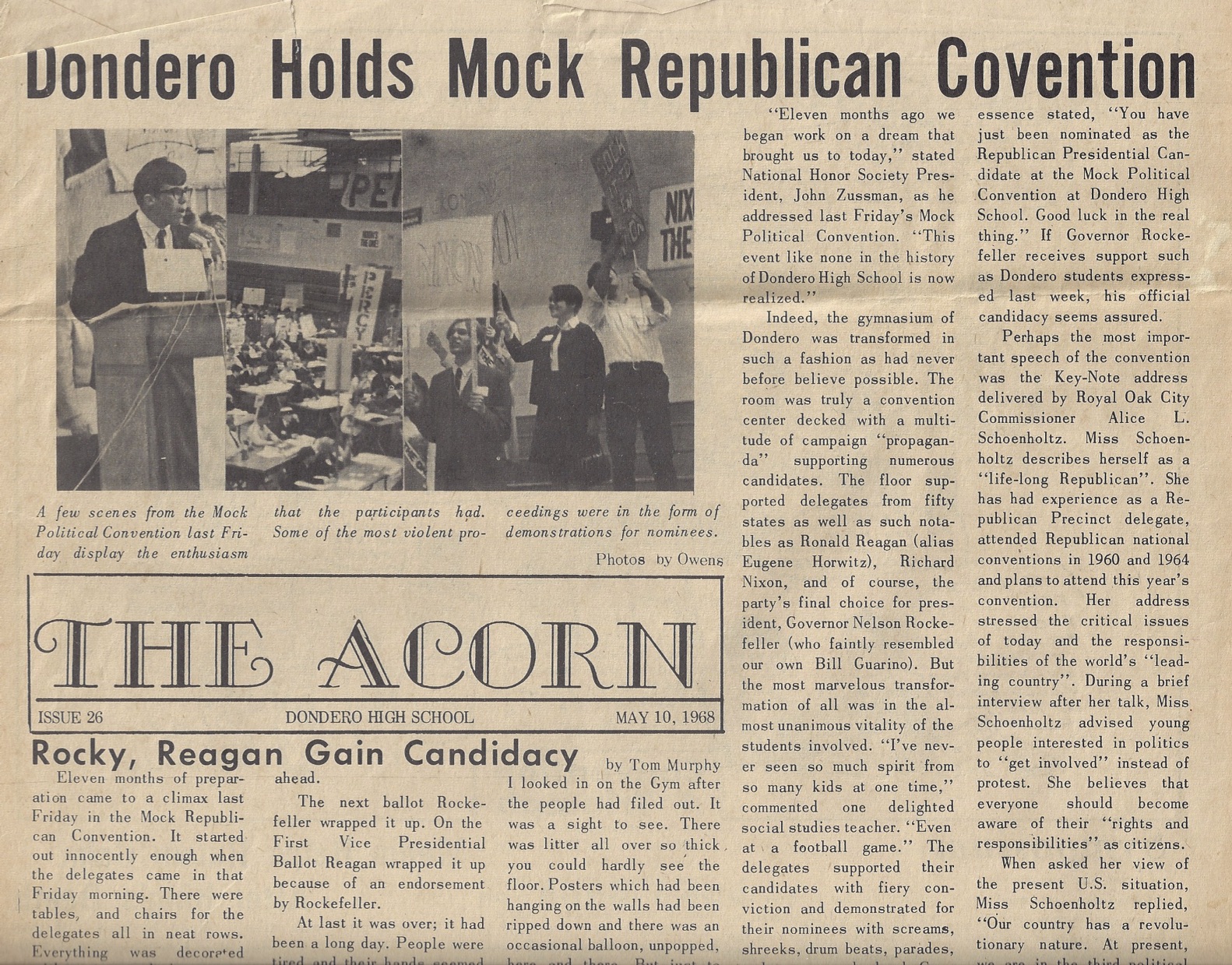 The lead story from our high school newspaper about the mock convention. At left in the photo, Bill portrays Nelson Rockefeller.

The idea came to us at the previous year’s Model United Nations in downtown Detroit, where high school students from all over the area came together, representing the nations of the world at that time, to simulate what a day at the U.N. would feel like. (My high school’s U.N. Club delegation was assigned the role of Paraguay, which turned out, when we did our research, to be the United States’ sole reliable South American ally in those anti-colonial times. Who knew?) It was fun, it was cool, and we actually learned about international relations.

We had all been inducted into our high school’s National Honor Society chapter, and I had been elected president for our upcoming senior year. Why couldn’t we do something similar? Though 1968 would be a presidential election year, few of our classmates were yet politically aware. Let’s hold a mock political convention—involving not just NHS but the whole school. It would spur political understanding and involvement in a much more dramatic way than dry lectures and tedious textbooks.

When we arrived back at school in the fall, we pitched the idea at a meeting of the Social Studies faculty. Each participating class, we proposed, would represent either a state delegation or a particular candidate. They would have to research their state’s or candidate’s positions and represent them fairly at the mock convention. Three students from each class, excused from all classes for the day, would participate actively, while the rest of the class would support them and attend as spectators during class time if the teacher permitted.

To our delight, the faculty approved our proposal on a voluntary basis, which meant that any teacher or class could opt out. (Few if any did.) We set a date for the following May, booked the gymnasium for two full days—a Friday for the convention and the day before to set up—and got to work.

There was a lot of planning to do. We had to assign all the participating classes to delegations and committees and make sure they knew what was expected of them. We had to plan seating, table space, and decor. And we had to plan the program to end with the school day, no matter how many ballots were required and no matter how long-winded the speakers were. 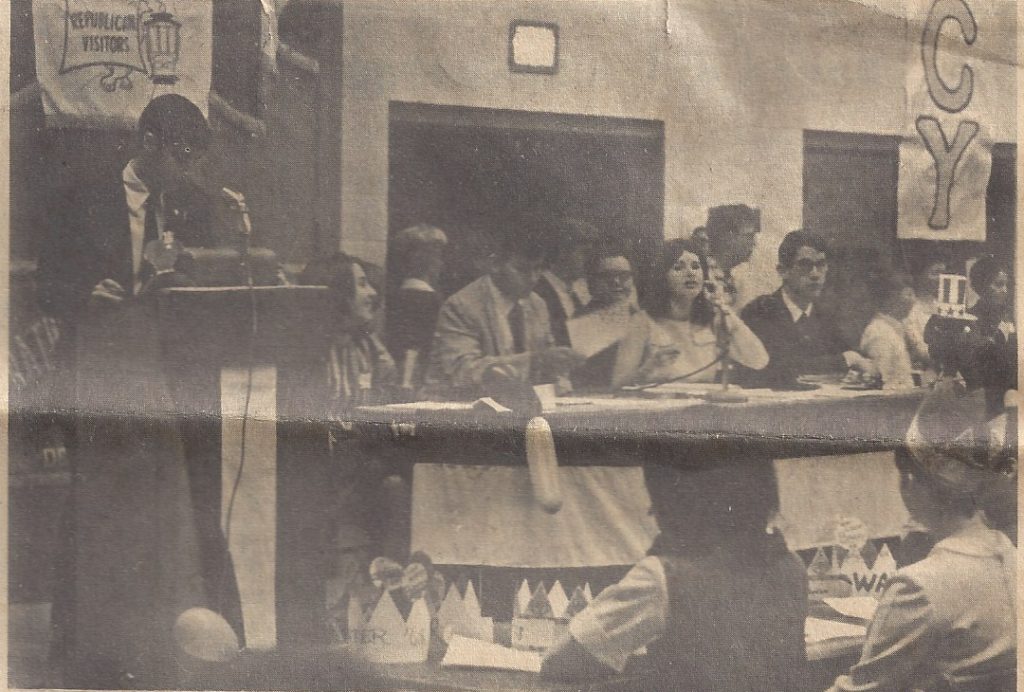 That’s me at the podium. On the dais (from left): co-conspirators Mary, Jonathan, Patty, and Pat. Source: Royal Oak Dondero High School Acorn.

We made one decision that seemed like a no-brainer but later came to regret. We decided to simulate the Republican national convention, whose race was wide open at the time. Richard Nixon, Ronald Reagan, Nelson Rockefeller, Charles Percy, Barry Goldwater, and local favorite George Romney all seemed like viable candidates. Like everyone else, we expected the Democrats to simply rubber-stamp President Johnson’s re-election candidacy. When LBJ withdrew from the race in late March, leaving the Democratic nomination in chaos, it was simply too late to change our plans.

We threw in a few curve balls of our own. For example, we assigned two classes to represent competing Mississippi delegations—one integrationist, one segregationist—and let the credentials committee sort it out. I can no longer remember whether they chose the entire integrationist delegation or accepted some delegates from each, but the school newspaper described it as “a very close decision.”

When we walked into the gym the morning of the convention, we were amazed. We had provided bunting, balloons, and tasteful signs for each state, but the students had transformed the place, going all out with posters, signs, and (we learned later) confetti. Delegates wore hats and buttons. The “candidates” circulated biographies, newspaper articles, and mimeographed position papers on the issues of the day—Vietnam, civil rights, poverty.

After the school band played the National Anthem, I welcomed the delegates and introduced our keynote speaker, a local (female, even before Emily’s List) city commissioner. Next came the committee meetings and reports. Finally we began the nomination process, going through the states in alphabetical order. The delegates orchestrated mini-celebrations, marching around the gym, throwing confetti, shouting slogans, and even recruiting band members to play. The nominees’ supporters applauded enthusiastically and pounded on the tables. We gawked in amazement that everyone had embraced their roles so avidly.

I made a procedural error when one state tried to “yield” to another. I thought this was the same as a “pass,” so I continued through the roll call in order. But the delegate objected (“Point of order!”), arguing that it meant to yield immediately to the selected state to make the nomination. I consulted Jonathan, our parliamentarian, on the dais. He confirmed that the delegate was correct—but that’s not how I had drawn up the rules. We ended up sticking to alphabetical order, and it turned out to be our one misstep in simulating a real convention.

Once all the candidates were placed in nomination, we began the actual voting. Each ballot took time because, in addition to announcing their vote allocation, the delegates had to praise their state. “The great state of Ohio, the Buckeye State, birthplace of aviation, which gave the nation eight U.S. presidents, casts 19 votes for its favorite son, our great Governor Jim Rhodes …” and so on.

Once the votes were tallied, New York governor Nelson Rockefeller (portrayed by our classmate Bill) was the leader, but had not obtained the majority necessary to win the nomination. We took a break and let the candidates and delegates wheel and deal. Remember, these were the days of smoke-filled rooms, before universal primaries and caucuses allowed candidates to wrap up the nomination long before the convention.

On the second ballot, Rockefeller achieved his majority, aided curiously by many previous Reagan supporters. Rocky took the podium as balloons dropped, confetti flew, and the delegates applauded. He accepted the nomination and endorsed Ronald Reagan for vice president. Apparently a backroom deal had been struck! A roll call vote confirmed Reagan’s nomination, and Reagan (my friend Eugene) accepted.

We closed the convention on a triumphant note and the delegates and spectators filed out, leaving the floor littered with flyers, posters, balloons, and tiny bits of confetti. The organizers hugged each other, exhausted but elated. We understood that we had set something truly extraordinary in motion.

Of course, three months later, the actual Republican convention chose to ignore our stellar example and nominated Richard Nixon, a prologue to the dark history of Watergate. In retrospect, we could have predicted that even in early May, when Nixon was already the front-runner. Our nomination of the more moderate Rockefeller (Nixon’s runner-up at the real convention) perhaps reflected wishful youthful optimism, or maybe a prescient attempt to save the nation from Nixonian ignominy and disgrace.

Still, we had succeeded far beyond our expectations, and our fellow students were now energized and involved in the political process. Or at least they were until late August—and the ugly Democratic convention in Chicago.

9 Responses to Rocky on the Second Ballot