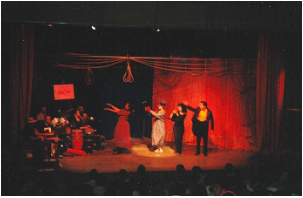 I’ve never been much of a tourist. From my days residing in the Haight-Ashbury to my thin-air existence in the Colorado Rockies, from my street musician days in North Beach to my current residence under the Hollywood sign (nope, not homeless), I’ve been an objet du tourism more frequently than I’ve been a tourist.

Hollywood tourists never listen but the fact is, there has never been a Hollywood beneath the chimeric glitz. Only recently, a succession of mayors have moved to create an iconized Hollywoodland, complete with post-modern film academies, an Oscar theater, and fledgling actors costumed as superheroes.

I often take my out-of-town friends to the flatlands of Hollywood, where low, windowless buildings shelter actors, directors, post-prod outfits, and technicians who spin the magic of Hollywood from green screens, pixels and props.

“Here it is, folks,” I say, sweeping an arm along the drab facade of a sound stage or food craft service parking lot. I feel bad for the tourists, vacationing in such a vacuum of glamour.

When I do travel, it’s usually to attend or present at a conference, scribble or teach or at a writers’ workshop, or tour with a band or theater company. Yes, those journeys often involve hard work, stress, and responsibility, but I like to vacation that way —it’s usually companionable (or conflict-ridden, or both) and you get to dig beneath the surface of a new, often-unique community and relate on a quality basis with the locals.

One such vacation still strikes a high note for me. In 1993, our theater company was invited to a Cuban theater festival during a time called el periodo especial. After the fall of the Soviet Union, Cuba was left to fend for itself. As much as the Cubans love American jazz, baseball, cars, and customs, they were forced to depend on trade relations with the cold and distant Soviet Union after the Eisenhower administration established el bloqueo, the blockade.

“Why would we want to trade with the Soviets 10,000 miles away,” Fidel complained, “when we could reach across 90 miles of Caribbean to our American neighbors?” Of course, Fidel was being purposely naïve. He knew why we cut Cuba out of our lives.

We had blockaded Cuba in 1960 after refusing to sell U.S. crude oil to the young revolutionary government. At that point, Cuba was forced to import Soviet crude to keep the island economy afloat and, when American-owned refineries refused to process the commie oil, Cuba was forced to nationalize Yank refineries.

For the U.S. government, it was okay for Cuba to break the mafia’s hold on Havana hookers, gambling, and nightclub fantasy, but — as we have seen more recently in the Middle East — you mess with Yankee petroleum and you mess with The Man… The Big Man…The Very Big Man.

For over thirty years, Cuba and the Soviet Union embraced, until 70 percent of the island’s economy depended on interaction with the Ruskies. When the Great Soviet Socialist Experiment fell to its knees and collapsed, Russia withdrew from Cuba precipitously and completely.

By 1993, Cuba had no petroleum, no paper, no ink or paint, no new vehicles, no manufactured goods. Had it not been for their national health system, they would have had no medicine. During the periodo especial, Cubans in the cities and the countryside often went hungry.

It was at that point that our theater company arrived in Santiago de Cuba for an international theater festival. We were very excited and honored. We were the first American artists to travel to Cuba for nearly two decades. We managed to fit a theatrical stage set into two duffel bags.

Five actors and six musicians stripped down to one piece of luggage and a musical instrument per artist and flew from Miami to Havana to Santiago de Cuba in a swanky Haitian Airlines 727 and a funky wreck of an Aeroflot jet. There were chickens in the overhead compartments and the white mist that ascended from the cracks in the floorboards was described by the implacable flight attendants as aire acondicionado. Many of us held hands during takeoff and landing. Who knows, perhaps some prayed.

In Santiago, we were welcomed with open arms by the Cubans who considered us heroes for defying the anti-Castro wrath of our government. At the time, before the Bush Administration shut every door to Cuban-American relations, we had a State Department license to travel to Cuba to perform, but the Cubans didn’t give a damn. We were heroes… unless we were spies.