Prompted By What We Wore
6 comments. 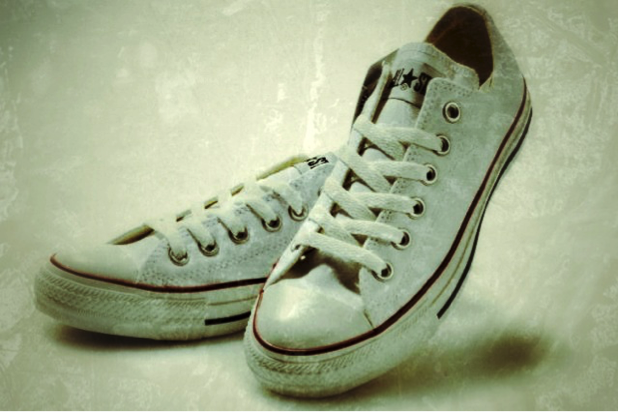 The rising sun was already blazing the Monday I walked to school for the first time in my new Converse sneakers. November in Phoenix had been unusually hot, and I had convinced my mother on the weekend that it was too uncomfortable to wear the black leather dress shoes and dress pants that I had worn to school in Belgium just a few weeks earlier. To my surprise, she had consented. Up until then, she had only ever bought me new shoes when my previous pair didn’t fit anymore. On that same shopping trip, I had also wrangled out of her a pair of corduroy shorts and a shirt emblazoned with a surfing motif. As I watched my new, tan and white sneakers hit the black asphalt I was, for the first time since we had moved to the US, eagerly anticipating, rather than dreading, my arrival at Arcadia High.

About fitting in after moving to the US during high school.

For three weeks, I had been the object of fascination, derision, and repulsion. The only foreigner at my school, I was an exotic creature that attracted and intrigued my classmates. Many of them had never heard of Belgium until I mentioned it, or believed it to be a part of France, or worse: thought it was a country in deep Africa. My formal outfits stood out from the shorts, T-shirts, tank tops and flip-flops everyone else was wearing, although it took me a while to realize it. But today — today would be different. I would finally blend in with the rest of the crowd, and as long as I didn’t open my mouth, be one of them.

The sneakers smelled of rubber, and in the morning heat my sockless heel grew a blister because my frugal mother had bought me shoes ‘to grow into.’ But that didn’t stop me from practicing the swagger I had noticed on the popular boys, the confident football and basketball players. I was one of them now, and I was going to walk through the front gates with the same confidence as everyone else. I slowed down my walking pace so I could arrive when most of the other students would already be there, loitering by the entrance and checking each other out.

I could already see, in the distance, other shorts-and-T-shirt-clad students ahead of me, their backpacks casually slung over one shoulder. I was still carrying my briefcase that was the standard school equipment in Belgium, and wished I had pestered my mom for a backpack as well, but I was afraid I had already pushed my luck far enough. Now I slowed down even further, to arrive when most students would already be in their chairs, so I could quickly hide my briefcase in my locker and enter the classroom bearing only a notebook and my new outfit.

I managed to do exactly that, and when I sat in my chair, just seconds before the teacher started the class, one of my classmates hissed: “Nice shorts.” I was elated. Someone had noticed! I stretched out my legs in front of me, showing off my new sneakers, but garnered no more comments. I would have to wait until break to enjoy my newfound acceptance.

“Nice shirt.” “Where did you go, K-Mart?” “Shouldn’t wear shorts until you get a tan, man.” “Did your mother dress you?” Those were just a few comments I heard between classes. Apparently I hadn’t bought the ‘right’ shorts, or the ‘right’ shirt, and thus nobody noticed the gleaming Converse sneakers that matched everyone else’s. The next day, I switched back to pants but kept the Converse, and I slowly melded into the background at school.

6 Responses to Shoes that Fit