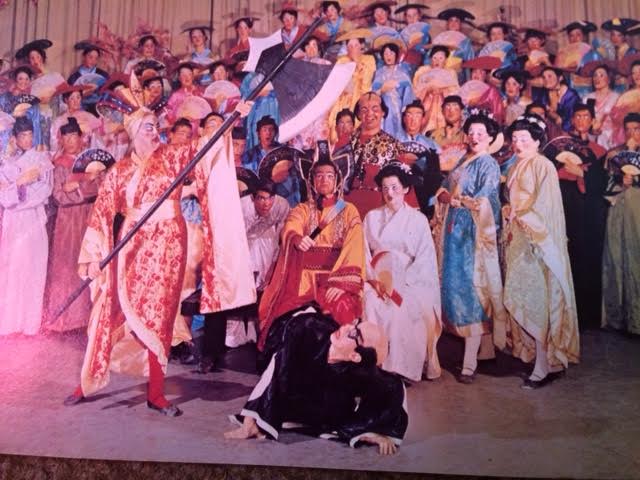 I spent six glorious, formative summers at the National Music Camp in Interlochen, Michigan. Founded in 1928 on an old logging camp, in a pine forest, between two lakes, it is the granddaddy of arts camps and was heaven on earth for me and like-minded friends. We waited all year to get there and not be misfits…to belong somewhere. I made the friends of a lifetime there.

I was a voice and drama major, though as an Intermediate taking Operetta (we performed Gilbert & Sullivan) I couldn’t be in the drama, so wasn’t accepted as a drama major my first summer in High School Division and had to patch various courses together to fill out my roster: Operetta, Chorus, Vocal Techniques, Dance, Costume Shop. I learned to iron that summer, a good life skill, never acquired by my mother. But I longed for the stage and got there the next summer.

We all adored Clarence “Dude” Stephenson, the director of Intermediate and HS Operetta for more than 50 years. At 88 years old, he and I remain in close touch. He no longer teaches, but has a summer cottage in Interlochen and returns each summer.  He memorized everyone’s name within the first few days of camp (there were about 125 kids in HS Operetta) and always paid attention to what everyone did on-stage. He somehow got the whole troop to move around and make sense of the movement. The featured photo is MIKADO in 1967. I am in blue just to the right of the blade of the axe with the “OH” expression. I am still in close touch with the fellow who played the Mikado (the Emperor of Japan). This is the most famous of the G&S Operetta’s. For the Mikado’s entrance, Dude had us enter from way off-stage after sunset with a sparkler procession, the Mikado was carried by several strong chorus members on a litter. Being the shortest person in the chorus, I led the front row of the procession. A stage hand stood just where we entered with a bucket of sand for our sparklers. The boy behind me forgot to deposit his, panicked, put it in the sleeve of kimono and nearly set himself on fire!

As young girls, we spent more time in our cabins and formed closer relationships with cabin mates and counselors. In High School Division, it was our classes that mattered and we bonded closely with others with similar interests. Those bonds remain strong to this day. Through the years I visited many times, I served six years on the National Alumni Board; with one friend I gave a half scholarship for Operetta, which we stopped when they stopped producing a full-lenghth operetta. Facebook allowed us to re-establish ties with others we’d lost touch with. Once one has been to Interlochen (rebranded Interlochen Arts Camp some years ago), there is a common link that is very strong, indeed.

9 Responses to Sound the Call to Dear Old Interlochen