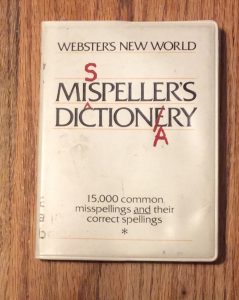 Ah, spelling.  It has been a frustrating struggle all my life.  For my father and two of my brothers, it was always easy.  That added to my frustration. My mother understood my frustration since she was a poor speller too. She told me that when she took an open book test in college, the book she always took was a dictionary.

My struggles with spelling. Included are my early problems and a reflection on the possible reasons for my poor spelling.

My struggles started in grade school.  Rules like “‘i’ before ‘e’ except after ‘c’ or when it sounds like ‘a’ like in neighbor or weight” made no sense to me. My mind got confused since there is no “i” in the word “way”.  When I had a math test and a spelling test on the same day, I only studied for the spelling test.  Generally, I got a better score on the math test. It was ironic. As they say, hard work does not always guarantee success, otherwise coal miners would be the richest people in the world.

At the beginning of most school years, I had to fill out a personal data form with my name, birthday,  date of birth, place of birth, etc.. Since I was born in Albuquerque, NM, I was always searching for a book with a map so I would spell “Albuquerque” correctly.  After a couple of years, I made it an objective to learn to spell “Albuquerque”. After I learned its spelling, my mother told me I should also know how to spell the county I was born in, Bernalilo.  Fortunately, I never had to answer that question.

Off to college.  By that time, I mastered using the dictionary. That worked most of the time. However, for my botany class, tests were the essay type written in blue books.  While I knew the science well, the instructor took points off for spelling errors. Most of the class was not impressed with this rule, especially me.  I ended up with a “B”, not an “A”.

Off to work, and my spelling became less of a problem. Most of the papers I wrote were typed by a department secretary or my secretary.  The secretaries corrected most of my spelling errors.  Later, when all the employees got personal computers, we typed our own papers.  Fortunately, the software had a spell correction feature.  Of course, I still had to be careful since the software could not tell the difference between real and “reel” errors.

I often thought about my poor spelling skills.  I blame the US Army.  When I was 3 1/2, I spent three months at Fitzsimmons Army Hospital in Denver since I was very ill.  During these  months, my mother visited me twice a day, but otherwise I was generally isolated.  The hospital did not have a separate pediatric ward.  I was in Denver even though we lived in South Dakota since my illness was initially a mystery to the physicians at the US Air Force base in South Dakota. The air force did not want to fly us home until they were sure the problem had been fixed so I stayed in the hospital for three months. Fortunately, there was no charge for the stay or air flights since I was a military dependent. However, I think that I did not learn vocal sounds well, and thus I was behind most children at that age. Then, at seven, the illness returned, and I missed two months of second grade. During that time, my peers were learning arithmetic and spelling skills.  I was able to teach myself math, but did not learn how to spell on my own.

In spite of my struggles with spelling, I feel I adapted well.  While good spelling is a valuable skill, I am thankful for dictionary.com and spell check programs.

7 Responses to Speling Is Hard For Me