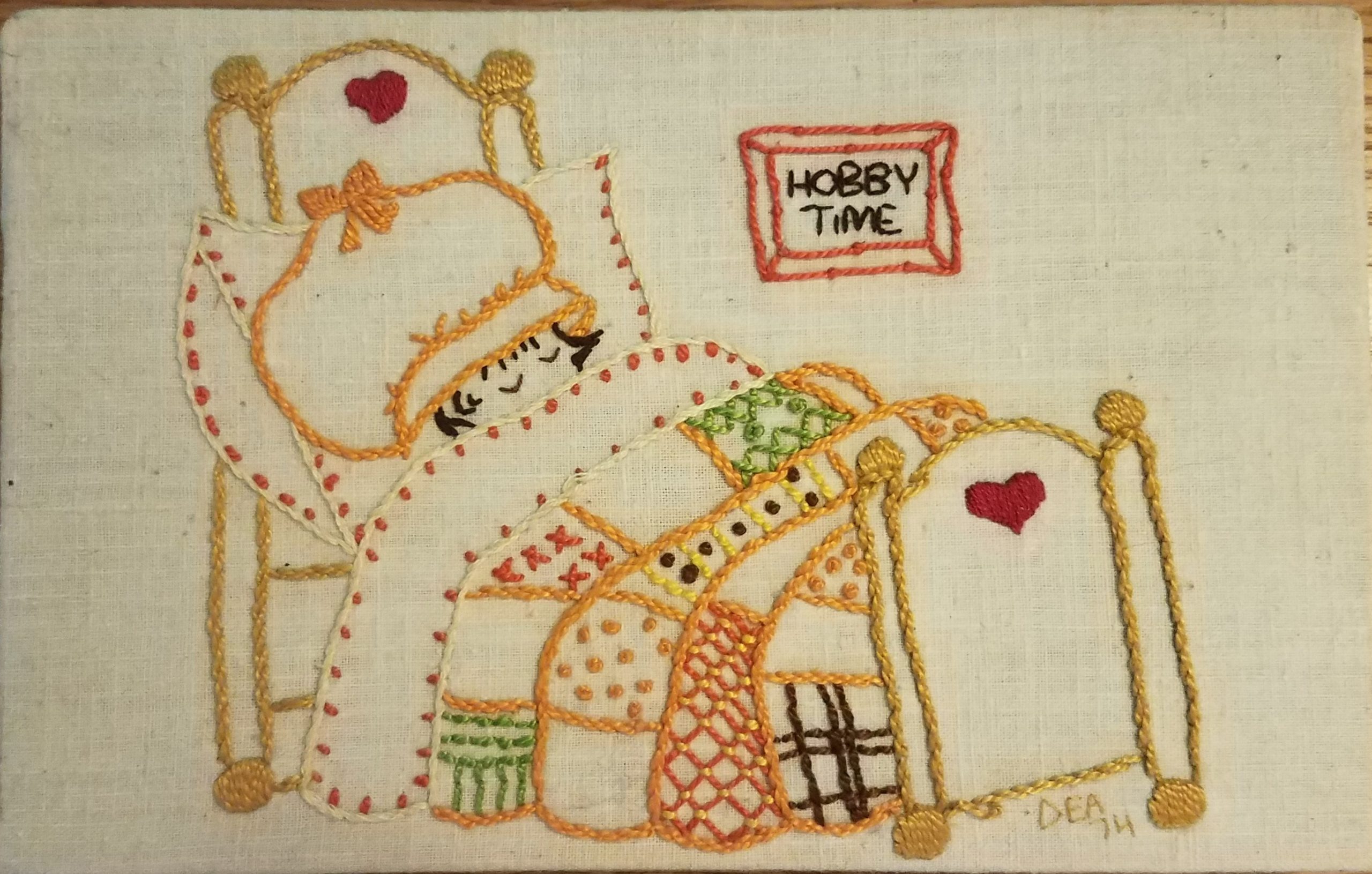 Long-time Retrospecters may recall my favorite story about my father, which I recounted in Father and Daughter in 2017. When I was little, I had a recurring nightmare about a witch chasing me. I think it must have started after I saw The Wizard of Oz, because the witch who was chasing me certainly looked a lot like Margaret Hamilton. When I finally told my father about it, he said “The next time that witch starts chasing you, you turn around and look her in the eye and tell her to leave you alone or else your father will get her!” It may sound silly, but the next time it happened I did as he instructed, and after that I never had that nightmare again.

She captioned the needlepoint "Hobby Time" because when I was asked what my hobbies were, I generally said "sleeping."

The only other bedtime memory I have from my early childhood occurred when it was time for me to go upstairs to bed, but my sisters, who were much older, were staying downstairs. When I would protest, my oldest sister would sing and play this song on the piano. There was a tinkly high part she played with her right hand that sounded like a music box. Here is an audio clip of the piano part.

Here are the words, so you can sing along if you like:

After she played that song, I willingly went up to bed. It was as if I had been hypnotized.

I don’t remember ever being read to before I went to sleep. It probably happened, but I can’t conjure up any memories of it. I do remember being allowed to read to myself in bed once I was old enough to read chapter books, and then when my mother would say “time to go to sleep,” I would say “let me just finish this chapter.” Of course I could never bear to stop at the end of that chapter, I would go on to another, and maybe a third, before she came in and insisted on turning out the light. Sometimes I would read under the covers with a flashlight, and if she suspected or knew I was doing that, she never said so. But that never lasted too long, because it got pretty hot with my head under the covers. And I got sleepy.

All my life I have been a good sleeper. In college, even when I stayed up late writing papers and drinking coffee, as soon as I finished my work I could go right to sleep. The coffee helped me stay awake when I needed to, but didn’t prevent me from sleeping when I was ready to turn out the light. I’m not sure that would still be the case, and to be on the safe side, I now don’t drink coffee after about 4 p.m.

The featured image is a needlepoint done by my law school roommate Diane. She captioned it “Hobby Time” because in those days when people asked me what my hobbies were, I generally said “sleeping.” During law school, sleeping definitely was my favorite thing to do, and I didn’t get to do enough of it. I still treasure that needlepoint, which she glued onto a block of wood so I could hang it on the wall.

Even now, at my (ahem) advanced age, I very rarely have trouble sleeping. The night before a trip I may wake up frequently, or when I am worried about one of my kids. But most of the time I sleep like a rock. Sometimes I read before bed, but more often I am on my computer, even though I know they always say that you should avoid screen time right before bed. That last hour of my day, between 10 and 11 p.m., is when I am at my most productive. At least, that’s when I generally write my Retrospect stories.

8 Responses to Sweet Dreams Are Made of This

Sleep, How Strange It Is
by jonathancanter

A Senior Sleep Routine
by Marian