Tattoo Me by Barbara Buckles
50
(58 Stories)

Prompted By Rites of Passage
11 comments. 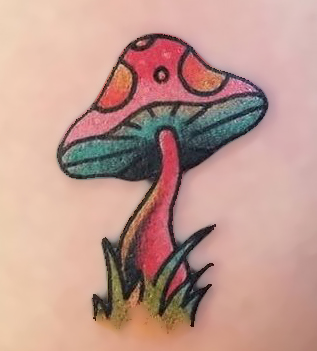 In 1968, when I turned 21, I didn’t rush to the nearest bar, because drinking was for losers. Instead, I got a tattoo. I didn’t actually know any other women with tattoos, but Dona, my best friend at the time, thought it was a good idea as well and even decided to get one herself. We nibbled on a little something just in case of pain, and off we rode on the back of our boyfriends’ hogs up to Lyle Tuttle’s tattoo parlor on the Sunset Strip. (Now long gone, and Tuttle himself died last year at the age of 87.)

Because all appearances to the contrary, I tended to play it safe...

Dona got a marijuana leaf tattooed within her bikini line; I opted for a ‘shroom (for obvious reasons) on my left inner ankle. Because all appearances to the contrary, I tended to play it safe: when someone offered me a joint, not being a fan of angel dust, I’d take one hit and wait to see how it affected me before taking another; when someone offered me a pill, I’d often take half first — and if it was a capsule, even going so far as to stuff one half with a bit of bread to keep it closed before swallowing it. And so it was that when I became a court reporter years later, it was easy enough to wear skirts and high heels and just hide my ink with a  Band-Aid. But usually I left it uncovered, and when I wanted to draw attention to it, I’d add a jingly anklet or two.

I have not for one moment regretted getting my tattoo. It was never as pretty as today’s tattoos, and it’s now kind of blurred and saggy, like the rest of me. (The featured image is how I wish it still looked.) But it’s a reminder of a time, a place, and a state of mind I don’t ever want to forget, of psychedelia, of a defiant me that still exists, albeit without the need to advertise.

In fact, 12 years ago, for my 60th birthday, I went back to the island on which I’d lived and raised my daughter during the ’80s and had “Kauai” tattooed under my mushroom. I don’t regret that, either — even though I no longer want to live there, I just want to remember how I felt when I did. Who knows what I’ll do for my 75th … my big toe is still pretty firm and smooth. Hmmm …

And now, for your listening pleasure, a great earworm from the Rolling Stones’ “Tattoo You,” released in 1981. And P.S., surprisingly enough, none of the Stones have tattoos — at least not to my personal knowledge.

11 Responses to Tattoo Me

A Degree Day of Observations
by Marian