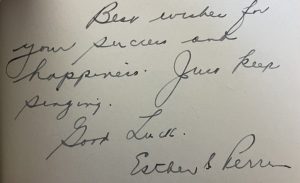 If there were a fitting phrase to describe my academic prowess in elementary school, I believe I would have been described as an  “airhead”, My elementary school reports were mediocre.  My kindergarten report  card was sprinkled with a few “N’s” for “Needs Improvement”, and  the comment on my kindergarten report card  was  “talks too much and loves to dance for the class.” My parents didn’t seem to care.  I was a girl and they had my  brilliant older brother  to brag about.

My parents had very low expectations for me academically. They  saw me as  affable, talented in music, with  average intelligence. I once heard my father say, “It’s a good thing she’s pretty!”  My mother had been  a good math student and had an amazing talent with words. She would do the Sunday NY Times crossword quickly and in ink.   I  felt I was a disappointment to her for not having the same skills.

My first few years  I glided  through the school system as an uninspired  student.  But there were glimmers of hope when in  the fifth grade I  was lucky to be in Mrs. Perrin’s class and received an “outstanding” in social studies!  Surprised, I asked her why.  I had never received anything better than an “S” for “Satisfactory” by any teacher.  She said, “Because you are  excellent  in social studies”!

So Mrs. Perrin was the first teacher to make me feel really good about myself, and she became my all time favorite.   Fast forward 12 years and I found my first job in my old elementary school which had been converted into a junior high. My first day on the job was meeting  my  8th grade class and I felt overwhelmed by the administration of delaney cards, seating charts, attendance and,  most of all, discipline.  Mrs. Perrin was still on staff and remembrered me! She swooped into my classroom and guided me through my first day jitters.

I have to admit, however, that It was a little awkward for me when i mingled  with the  staff in the teachers’ room.  I loved chatting with the fellow teachers but  I could not bring myself to call Mrs. Perrin  by her first name.    In the few years that our careers overlapped at JHS 127 in the Bronx, I could never call her “Esther”.   But the  greatest satisfaction I had was not only working with my beloved 5th grade teacher who gave me confidence in myself.  It was because I was now licensed by the New York City Board of Education to teach …..social studies!

8 Responses to Thank you, Esther Perrin!