Prompted By My First Paycheck
3 comments. 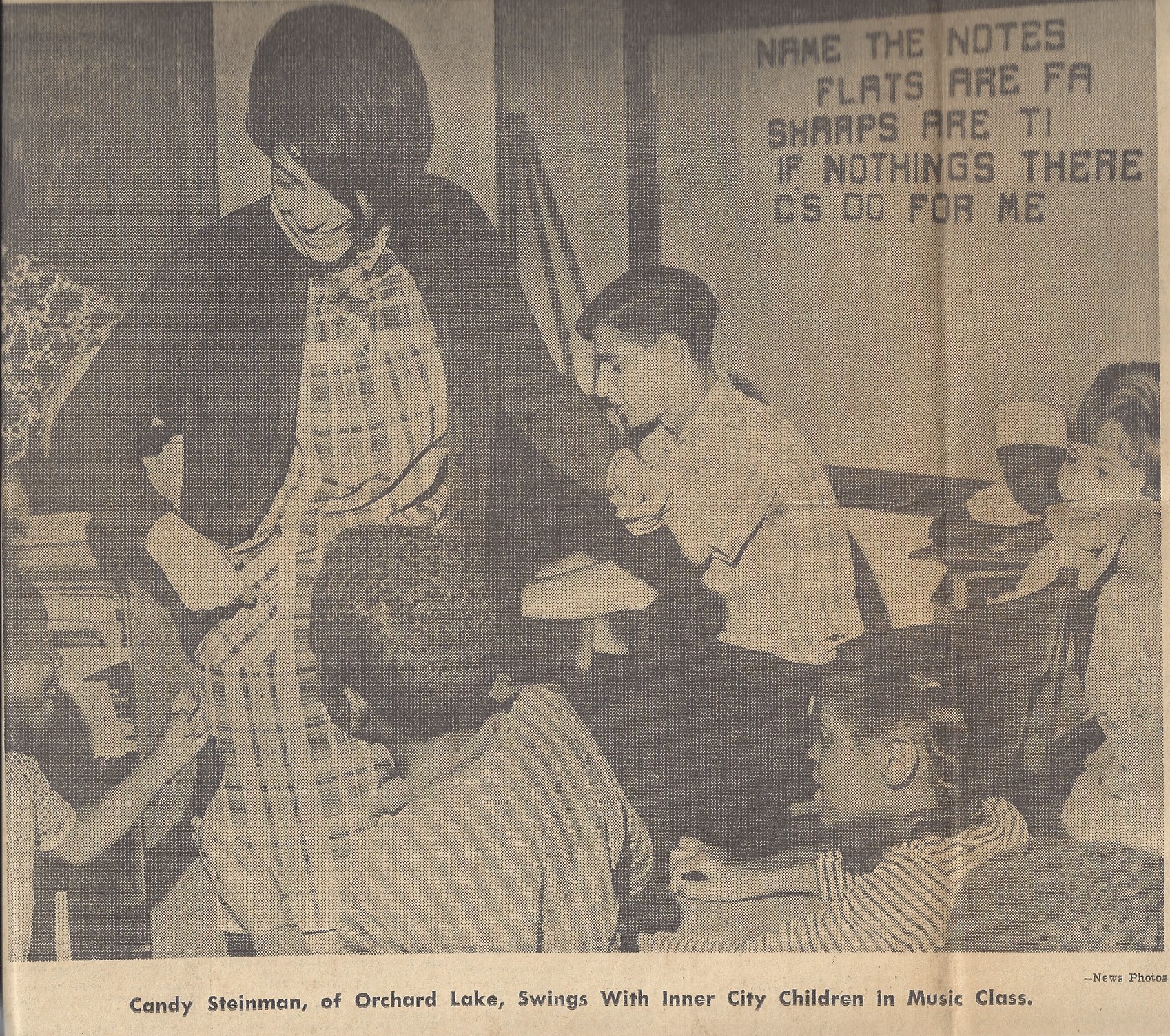 Candy, John (at piano), and students at Chaney School in 1967. Detroit News photo.

While passing through the halls, inside these dear old walls,
We realize how thankful we should be.
And when we leave someday, most all of us will say
My Chaney years were happy ones for me.
Our friends at other schools say we have bias,
But let them know the truth—they’ll want to try us.
So now, for all to hear, we’ll tell why Chaney’s dear!
Just listen, friends, and with us you’ll agree.

Was the song meant to instill a false sense of pride in his students, or a fever dream of a school where he’d really like to teach?

In 1967, when I was 16, I spent the summer teaching at Chaney Elementary School, a stately but run-down old building in Detroit. I was part of a platoon of thirty Jewish teenagers who volunteered in a program called “Mitzvah Corps,” taking its name from the Hebrew word signifying “good deed.” Every day we took a charter bus from the predominantly white suburbs to two schools in the inner city. None of us had teaching experience, but we had bright eyes and idealistic dreams and had been invited by a grateful school staff, which gave us (as I recall) a day or two of orientation and training. 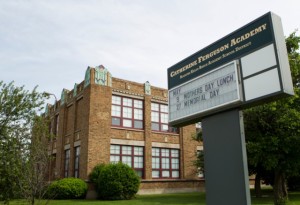 Of course, nothing can truly prepare you for that first day in the classroom. In the mornings I team-taught reading to third and fourth graders with another volunteer named Candy. The kids clearly did not want to be there. They chattered and looked out the window and rarely responded to our questions or instructions. We’d chalk a sentence on the blackboard and ask them to read it. No one volunteered, and even when we called on someone, they might not respond. We had no authority in that classroom and the kids knew it.

In the afternoons I taught music with Nora, a girl I knew from music camp. On orientation day we scoured the music room for songbooks and sheet music to find out what songs the kids might already know. Most of them were full of old-fogey songs like “The Sidewalks of New York,” which we knew wouldn’t work. We also found the Chaney school song, written by their regular music teacher. It was old-fashioned too—in waltz tempo, no less—and full of praise for this very school.

The Chaney clocks are never wrong,
The bells are always right.
At drill we know just where to go,
Our rooms are clean and bright …

Aside from the absurdity of revering a school for its clocks and bells, the song was packed with lies. Some Chaney clocks didn’t work at all, and those that did were invariably off. The bells often rang randomly and the rooms were anything but clean and bright. We weren’t sure whether the lyric represented the music teacher’s attempt to instill a false sense of pride in his students, or his fever dream of a school at which he’d really like to teach. (It occurs to me that I’m probably one of a handful of people alive now who still remembers the Chaney school song.) 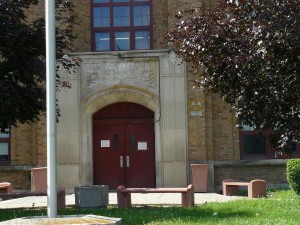 Still, when we tried the song with the kids, they not only knew it, they liked it! We supplemented it with songs we sang ourselves at youth group gatherings and retreats. One song they loved was “Flea Fly,” a call-and-response nonsense song accompanied by a clapping rhythm. Like most Detroit-area teenagers, even from the white suburbs, Nora and I also loved Motown, and we occasionally added popular songs of the day, like “My Girl,” in which we could guide the kids in simple doo-wop harmonies. Some days I brought my guitar. It helped that we were only a handful of years older than the kids themselves.

By the second week, Candy and I realized that a significant percentage of our “reading” class was struggling because they didn’t know their letters! We decided that our mission for the summer would be to make sure all our students had mastered the written alphabet. We knew they liked to sing, so we led them in the Alphabet song. Few sang along—they didn’t know it either! (This was before Sesame Street made it ubiquitous.) In desperation, we tried putting the alphabet to “Flea Fly.” “A,” I’d call out, and “A,” they’d respond, clapping along. “A, B.” “A, B,” they’d respond. “A, B, C!” “A, B, C!” and so on. This, they liked. We began to make progress.

Meanwhile Nora, a musical theatre fanatic, suggested that we excerpt and rehearse a musical in our afternoon music class. We could even perform it the last week of the summer program! We settled on “Peter Pan” and started teaching the songs to the kids. “Tender Shepherd” gave us the chance to teach them a round, and they loved “I Won’t Grow Up!” not just for the sentiment but also because it was another call and response.

One of our students, Henry, had been sullen and withdrawn. But when we cast him as Mr. Darling (the children’s father), he began to come out of his shell. He started smiling and participating. It was a minor part, but he loved having a part of his own.

By the end of the fifth week, we felt like we were making a difference. There was one week to go. In reading, now that they recognized the letters, we could work on words and sentences. In music, we had a show to put on!

We do not fight, we read and write
And learn to use our brain.
No teacher fuss, it’s up to us
If we’re to gain.

But we woke up on Sunday to the news that Detroit had erupted into race riots. Police had raided an after-hours bar in the inner city, and the confrontation between cops and citizens had gotten ugly. Stores were being looted, cars and buildings were burning. The rioting continued all that day and into the night.

By Monday, it was clear that a group of suburban white teens could not safely venture back to the inner city. Reluctantly, our adult advisors canceled the last week of Mitzvah Corps. Our job was unfinished, but there was nothing we could do.

The rioting went on for five days. Governor George Romney (yes, Mitt’s father) mobilized the National Guard, and soldiers patrolled the streets. When it was over, Wikipedia tells me, 43 were dead, 1,189 injured, 7,200 arrested, and more than 2,000 buildings were destroyed.

The next summer, due to widespread fear of more riots, Mitzvah Corps was canceled. The riots’ failure to materialize was widely attributed to the fact that the Detroit Tigers—with four African-American players—became a contending team that year, funneling passion into sports. They won not only the pennant but the World Series as well, and Detroit—black and white—came together to celebrate their victory.

Mitzvah Corps was resurrected the following year, and again a busload of teens taught in two Detroit schools, including Chaney. I had now completed my first year of college and came back as executive director, at a salary of $50 a week. It was below minimum wage but seemed like real money. I no longer taught actively, but went to both schools every day, coaching the teachers and troubleshooting problems. We finished out the summer without incident.

But Mitzvah Corps had lost its innocence. The teachers were more fearful and the students more wary. Even Henry was back in his shell. We now knew what could happen and, despite the fact that it didn’t, youthful idealism was no longer an option.

3 Responses to The Chaney Clocks