The Green Hornet by Constance
10
(18 Stories) 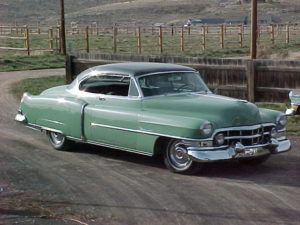 As the family upgraded to newer, better cars, it got so I could drive the older one almost exclusively even though I wasn’t technically the owner. A two-tone green Cadillac that was old but didn’t exactly qualify as a beater became known as The Green Hornet. What a tank. It was like a couple of big, comfy sofas wrapped in metal that has made all subsequent cars feel like a tomato can to me.

My friends and I would bomb around in it, ski-jogging in winter, cruising Riv in all seasons. Riv, or the Riv, Riverside Avenue, the main drag going through downtown, was all of maybe 10 blocks and kids from all over the city would come and cruise slowly, windows down in every kind of weather, checking each other out. At the end they would turn around and cruise back again, looping on endless repeat. Once, around Halloween, we wired a pumpkin to the hood ornament. Woo hoo. Would have loved to be getting up to more mischief than that, but mischief was in short supply on the ground.

Here is a pic of one like it. You lifted up one of the tail lights to put gas in.

6 Responses to The Green Hornet