The Lotus and the Schoolboy by Charles Degelman
100
(155 Stories) 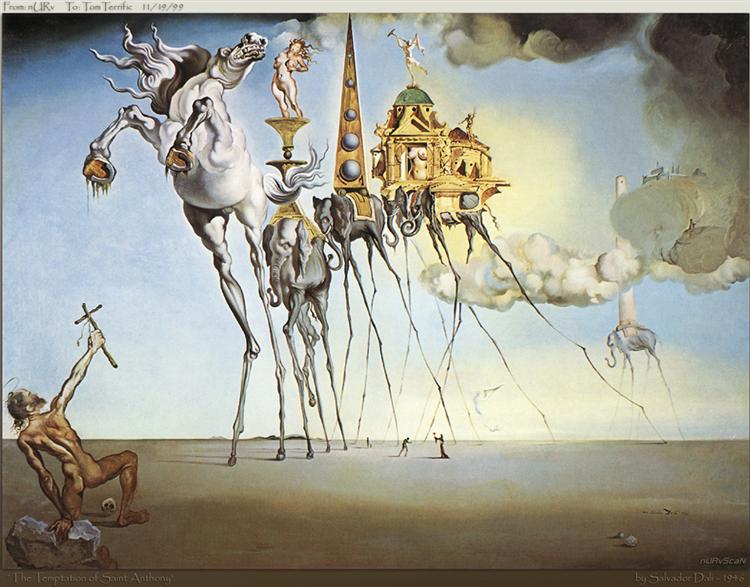 I’ve never been big on sin. Sin belongs to a god thing full of good, evil, and punishment, straight-jacketing people with shame, and excommunicating so many nice things. Regardless of my godless stance, at age 11, I helped myself to three temptations.

First, I sought out pictures of naked women in magazines, stolen from my biggest brother’s bureau drawer. The secrets these women held helped me to elaborate upon my first temptation — sex, albeit with myself.

Second, I stumbled upon James Dean and the hip generation of the 1950s. James Dean looked the way I wanted to look, cool, with the perfect mix of hip/tough guy hair and a casual manner that I yearned to affect. 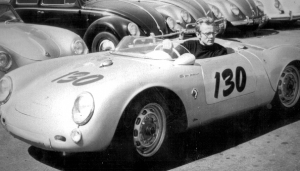 My new hero, James Dean, drove a Porsche Spyder, the hottest racing machine ever seen by this eleven-year-old boy. And the boy’s hero died in that car, on a narrow, California road, after yielding to the temptation to drive very, very fast.

But dead or alive, James Dean and his badass Porsche Spyder interfaced with temptation #3 — fast cars.

Gazed upon by pubescent boys, fast cars become sad but workable surrogates for sex. Speed and beauty carry the beholder to temptation’s fine line — danger and ecstasy, real or imagined.

At ten, already no virgin when it came to the temptation of speed, I had convinced my old man to help me build a soap box racer. At 11, I discovered “Hot Rod” magazine, a pristine rag that celebrated our post-war rebellion via the American automobile. Nineteen twenty-seven and ‘32 Fords were tops, as was the Ford flathead V-8 packed full of goodies like steep-profiled Iskendarian crankshafts and camshafts, chrome-plated Edelbrock heads, and Stromberg dual-throat carburetors.

At 15, my buddy and I defiled a classic ’36 Chrysler we found in a barn, chopping its elegant lines, stripping it down to racing trim, and racing our fast car — we called her Serafina — on the local jalopy circuit.

I had recently read a novel about a young boy who meets Frenchy Lascalle, a displaced, sadder but wiser playboy European racing driver-turned-mechanic. Parted from his exotic career through tragic circumstances, Frenchy set out to prove to our young protagonist that a tiny red MG-TC with its agile suspension and hard-working engine could beat our hero’s bullying high school antagonist in his bull-powerful but poorly suspended ’48 Ford.

Temptation reached a tipping point. The fictitious Frenchy Lascalle and his red car lured me away from hot rods and drag strips and transported me to foreign shores where I was introduced to the Ferraris, Maseratis, Alfa Romeos, Jaguars and Mercedes Benzes of European road racing. 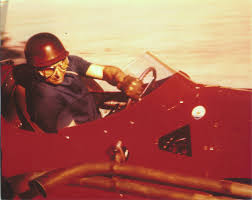 I learned all I could about the cars, the drivers, Fangio from Argentina, Stirling Moss and Mike Hawthorn from Great Britain, the wealthy Marquis de Portago, a playboy who yielded to temptation and fulfilled his own death wish in a fiery high-speed crash.

Still, I was too young to race and had begun to realize — as I became aware that life was complicated and often unjust — that racing cars and the people surrounding them weren’t doing much to make the world a better place. I turned my attention to more serious matters.

Fast forward two years. I had graduated high school and been accepted to college. I floated in limbo between two lives, one in the New England town behind me, the other beckoning from inside the open gates of academia.

One muggy June afternoon, shortly after my high school graduation, I was driving my mother’s VW along the sinuous New England roads between my home and Fitchburg, a mill town, where I had accumulated a college fund via my work after school and in the summers.

On the way home with my $2500 bank check, I stopped, as my mother had requested, to give the VW a lube job and a tune up at an out-of–the way garage. With nothing to do except hang, I pulled a coke out of the cooler between the gas pumps, and decided to wander.

At the far side of the garage, a long tin-roofed shed stood beneath a giant maple. The shady door yawned open, so I approached. Peering inside, I could discern a tool bench with a vise, a pegboard wall of mechanic’s tools, and boxes of auto parts.

My eyes adjusted to the darkness and there, lurking in the shadows like a jungle cat, stood a British racing green Lotus Super 7 America, crouched low to the ground, ready to pounce.

I approached the gleaming car. The Lotus was designed purely for speed. With its boxy cockpit and lanky fenders, some considered the car ugly, but its beauty lay in its design and engineering, and with the lean pragmatism of its lines.

After racing my mother’s VW over the New England roads, I ached to feel what it would be like to settle into the drivers’ seat of this small, but aggressive machine and go very fast… and very loud. In two months I would be 18, old enough to race.

I walked to the Lotus and stood over it, shoulders shrugged, hands stuffed in my jeans pockets. I noticed a hand-lettered card tossed onto the narrow passenger’s seat.

My own check lay carefully folded in my shirt pocket, Despite my college acceptance, I had no idea where my life was heading while, at my knees crouched a machine at the starting line of a track often dreamt about but not yet followed. My mind overheated like a Ferrari with a broken thermostat and my heart continued to pound.

I walked out into the sunlight to gain perspective. The entire scene around the garage reeked of the ordinary, from faded gas pumps to the green-leafed parasol overhead, to the clanks and whirrs of the mechanics. Was I about going to put one foot in front of another and trudge off to four more years of school? Or would I make this purchase, right here, right now, before I weakened?

Gingerly, afraid of my own footsteps, I tiptoed inside and stood once again in the aura of the Lotus.

I spun around. The owner stood in the doorway, wiping the grease off his hands with a wad of waste.

I stood there, staring down, not wanting to break out of the spell cast by the crouching race car.

“Wanna buy her?” he asked. “The little woman won’t let me race no more. Got a kid now.”

I could hear the crickets outside, their manic rhythms moving in and out of synch. My eyes blurred and I walked past the mechanic into the sunlight and my mother’s VW.

10 Responses to The Lotus and the Schoolboy