Prompted By My First Car
13 comments. 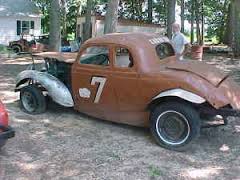 I grew up in rural New England and, altho my dad was a scientist who worked in Boston, I spent my school years in a small public school that embraced equal measures of college prep students and shop kids.

Many of my friends were the sons and daughters of farmers and mechanics. Out of family and farm responsibility, most of them learned how to drive tractors and trucks as part of their impressive list of chores.

My dad taught me how to drive at 11 in a big back meadow where I could start, stall, alternately pop or burn the clutch and narrowly avoid New England stone walls while plowing down hapless rows of victimized weeds.

At 15, I worked Saturdays and after school with my best pal Roger, whose dad owned the Channing Iron Works, a filthy but functional machine shop.

My first car, Serafina, was an elegant 1936 Chrysler Coupe with a rumble seat that my father’s friend was eager to eject from his barn. I couldn’t officially ‘own’ Serafina. I was underage, but she was mine. I named her Serafina because I’d heard somewhere that Serafina meant ‘fiery.’ I thought that was cool. Who knew?

Serafina would have made a great classic car but Roger and I were into hot rods, not sedate sedans. We made other plans for Serafina. One summer day, Roger and I pulled the machine shop truck up to that barn door, hooked a chain to the Chrysler’s rear bumper and extracted this pigeon-shit spattered, straw—covered beauty in disguise, hauling it backwards on flat tires into the gentrified barnyard where it sat like a disheveled hayloft bum, blinking through its filthy windshield after decades of sleep.

But did we do the right thing? Did we restore this sleek, flare-fendered beauty to is former glory, cleaning every piece of its robust body and engine to perfection, scrubbing rust from its tall, proud radiator grill with the classic Coca-Cola and toothbrush treatment? No we did not.

We had other visions, Roger and me. We wanted to build a stock-car racer, the kind that roared around dirt-track bullrings in New Hampshire and Massachusetts under the glare of Saturday night lights. We used to attend these races with some of the older guys around town who thought our enthusiasm for the slam-bang action was admirable. To our ears, the roar of 25 raggedy, chopped-up, roll-barred contraptions sounded like the thunder of the gods. Country boys.

We hauled the Chrysler back to Roger’s machine shop basement and invited the gang to oogle our booty.

“Hey, said Paul,” the eldest son of a local farmer. “Tell you what.” He handed us a greasy handbook of rules and regulations put out by the local hot rod association. “You guys cut this buggy down to spec and rig it for the for the local races and I’ll drive it for you.”

Roger and I were ecstatic. What a glory day! Paul was one of our heroes. One of those older guys who never put us young guys down and would surprise us by dropping by to pick us up to drive over to Kimball’s Ice cream stand for a Friday night hang out in the parking lot. Sometimes — with parents’ permission— Paul and his pals would drive us up to the New Hampshire stock car races.

Paul knew we had the resources to tear down this elegant car: Roger’s dad was the guy with the machine shop — acetylene torches, grinders, welding machines, all spark-throwing monsters that required us to suit up like over-burdened space kids.

Roger and I ripped out the dusty rotten upholstery. Out went the once-seductive seats. The heavy curves of the fenders were enlarged to allow for oversized tires to give the car traction. We installed a crash-seat fabricated from an oil drum, installed a sturdy pipe-framed roll cage for the upendings that inevitably took place on these short dirt tracks, the cars, tumbling, helter-skelter, making the crowds roar like Romans at the Coliseum.

Serafina’s fiery engine, an eight–cylinder, in-line behemoth with pistons as large as coffee cans, was denuded, oiled, polished, and reassembled with the help of Roger’s dad. A special carburetor, a gift from Paul, doubled the monster’s breathing power. We installed heavy pipe crash bars at the front grill and rear of the car. We welded a brace of similar deflectors along each side of our creation, making it impervious to sideswipes by villainous competitors. Our Chrysler coupe was ready for the fray!

Roger and I were full of dreams. Clearly, Serafina was the baddest, fastest stock –car racer this side of Dogpatch. Although too young to race, Roger and I would stand on the victory podium with Paul, the straps of his checked-bedecked crash helmet hanging casually below his square jaw. Trophies too big to lift would gleam in the night light and we would drown in adulation.

On race night, Paul climbed through Serafina’s window (the doors were welded shut) and buckled up. Because the car was a new entry, Serafina had to start from the back of the pack, but that was just a challenge for Paul.

“Don’t sweat it, kiddos,” he winked. “We’ll be cutting through this pack of jalopies like a knife through butter.” Roger and I cheered and back-patted our hero, then stepped away as Serafina, open exhausts roaring, leapt forward down pit road.

After a rolling lap for warm up, the field took the starter’s green flag and floored it into the first turn. The roar of 33 engines with straight pipes (no mufflers), did more than deafen; it compressed our skinny young bodies until our hearts stopped. The smell of ethanol fuel was headier than any acetone we’d ever used to build models. We were in the big time and the race was on.

The front of the field drifted sideways on the dirt, noses toward the apex of the turn, rear tires grabbing for traction. Cars jostled from the impact of metal on metal as they found the line around the first two turns. Hot white lights gleamed down on the multi-colored cars, increasing the sense of speed and heat.

Two or three cars at the front began to pull away from the pack. As they increased their lead, the slower cars began to string out, gaps widening. Cars spun, corrected, and roared back into the carnage. And bringing up the rear, was Paul and Serafina.

Paul worked hard. We could see him out there, sawing through the curves, his arms trying to hold our chopped coupe in the groove. Despite his efforts, Serafina fell further and further behind until the lead cars caught up with her and swept around her as if she was standing still.

One by one, the other cars swerved, bumped, and slid around Serafina until she was alone once again on the track.

Roger and I looked at each other, horrified, embarrassed, confused. Paul never gave up, but after the field passed Paul and Serafina the third time, the flag fell, the winner picked up the checkered flag and circled the track victorious. The rest of the pack threaded their way behind the pits. The race was over, and Serafina had finished dead last… three times over.

We ran over to our car, stunned, sweaty, and exhausted. Paul shut down the engine and clambered out. His face, this kind young man, mirrored our disappointment. Still grimy and stinking of sweat, rubber, exhaust and oil, he placed an arm around each of our shoulders.

“But we cut everything off her,” I said.

“Yes you did. But Chrysler builds those cars to last, not to race. You remember how much metal you had to cut through? Well. The damn thing is built like a Sherman tank, not a race car. Serafina just wouldn’t go where I pointed her. She couldn’t accelerate out of the corners like the other guys, and she sure as hell couldn’t stop.”

Paul pulled of his helmet. He looked sad and worried he had disappointed us. “But you guys did a great job,” he said. “Who knows, with a little more work, maybe we can try again sometime.”

The next Monday morning, Roger and I towed Serafina home from the track, circled her into the back field at the machine shop, and left her there. It was September and time to go back to school.