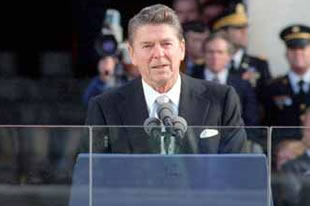 While this month’s inauguration was memorable, there have been other memorable inaugurations in the decades I have lived in the Washington, DC area. One I especially remember was January 20, 1981, Ronald Reagan’s first inauguration. I was working for the federal government at the time, in the research office of the Food and Nutrition Service, which administers the food stamp program, the school lunch program and several other food programs for needy families. We knew that the incoming Reagan people were ideologically opposed to anti-poverty programs, so we spent the weeks between the election and the inauguration finishing and publishing every research report we could.

Past inaugurations have also brought dramatic changes in approaches to governing.

We suspected – accurately, as it turned out — that they would stop putting out any new research once they were in control. The problem was that the research we were doing did not support their negative assumptions about the poor. Our research showed that most families receiving food stamps were either elderly or working and that very few owned new cars, big homes, or fat bank accounts. Or any bank accounts at all. I remember doing a table for someone that showed that the median bank account balance for non-elderly food stamp recipients was $0.

So on inauguration day, I came into work, even though it was a federal holiday, to see if I could get one last report out the door. My office was a couple of blocks from the National Mall and the streets were all deserted that early in the morning. I lived in the Capitol Hill neighborhood and the police had made everyone take their cars out of the neighborhood the night before. I assumed it was for security reasons and left my car with a friend in the Virginia suburbs. But the day of the inauguration, all the parking spots in my neighborhood filled up with limousines and fancy cars with out-of-state plates. We waited in vain for the police to ticket them, until we realized that we had all been forced to relocate our cars to provide parking for the inaugural VIPs.

Later in the morning, I took a break to see what was going on. At that point, I could see groups of people moving toward the Capitol for the inaugural ceremony. Even though it was not that cold – Reagan’s second inauguration was the coldest on record, but the first was not – there were fur coats everywhere and people being dropped off by limousines. I could see that the Reagan administration was going to be very different from the administration of Jimmy Carter.

I did get that report published and it was a good thing, because within a few days, they had replaced all the political appointees in the agency. Ironically, the guy who was appointed as the agency director was a man I had worked with when we were both staff for the Senate – he on the Republican side and I on the Democratic – so I cut a deal with him to let me stay in my job until I left for graduate school in the fall. He used to call me into his office, ostensibly to talk about some policy issue, and then spend the whole time complaining that no one in the department leadership would listen to him. I think his problem was that he was a fairly rational guy and not ideological enough for the higher level political appointees in the department. He was pushed out of his job shortly before I left mine for graduate school.

19 Responses to The Other Changing of the Guard