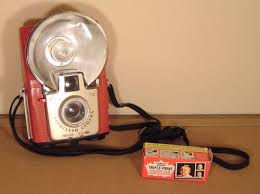 I must have been all of a third grader when the family went to my cousin Margie’s wedding. The previous Christmas my sister and I had received these little Brownie box cameras from Aunt Ruth. Simple things. Beige plastic. You put in a roll of film and snapped a flashbulb into the socket and hoped it fired. You had to remember to wind it manually after each shot. Later the film had to go in to the store to be developed. There were so many steps along the way where something could go wrong that it always had a bit of a magical quality to it for me whenever it worked. I walked around the wedding with it hanging from a cord around my neck. Very stylish accessory. Of course I took a few snaps but usually I was a bit conservative so as not to blow through the film and bulbs too quickly.

There were so many steps along the way where something could go wrong that it always had a bit of a magical quality to it for me whenever it worked.

As it happened, none of the professional photographer’s photos made it. Nada. Zilch. Complete fail. What a tragedy. This was the pre-digital age when no one had cameras on their phones. No one had mobile phones. I know, hard to remember. The newlyweds had to ask that anyone else who had taken photos at the wedding please share with them. I was kind of shocked and pretty proud when the bride and groom used one of my photos to publish in the newspaper where Dave, the groom, was working at the time. What a darling couple.

One Response to The Photographer, Early Work